You might think hackers-in-hoodies are the most sinister threat to the World Wide Web, but a speedy, efficient internet actually relies on the integrity of a vast web of submarine fibre-optic cables – and the ships that lay and repair them.

Submarine cables? What happened to orbiting satellites and on-demand-wireless-connectivity? Well, as it turns out, those technologies have speed, latency and capacity issues – which is why an estimated 99% of all global digital data traffic runs across the submarine network.
This includes your emails, photos, videos and social media – a frenetic 24/7 merry-go-round orchestrated in no small part by the likes of Google, Facebook, Amazon, Apple and Microsoft, interconnecting more than four billion internet users.
In addition, it carries the swathe of data that shapes global industry, science, commerce and finance, accounting for some €8 billion of daily transactions. At last count there were around 350 fibre-optic cables criss-crossing the ocean floor – together measuring nearly a million kilometres – and those monitoring these things say the volume of traffic is growing by about 35% per year.

For all its scale, the network’s an extraordinary example of precision engineering. Cables – often more than 3,000km in length – are laid in water thousands of metres deep and deftly routed around deep trenches and through undersea mountain ranges. In shallower areas, where they could be damaged by anchors or commercial trawling, the cables are buried in trenches excavated by remotely-controlled ploughs, guided from the ships above.
At the core of a typical cable are numerous hair-thin filaments transmitting pulses of light at a blistering pace. They’re protected by multiple layers of steel sheathing and hard-wearing, synthetic composites because, in addition to the fearsome pressure, numerous threats lurk in the deep.
Earthquakes, volcanic eruptions, landslides, anchors and fishing nets are common dangers – but also sharks. Why sharks are irresistibly drawn to the cables is not known, but the frequency of bites underscores the need for really, really tough sheathing.
Just as with laying a deep-sea cable, repairing it a demands high-tech solution – not the least of which is finding a break/fault in the first place. Thanks to meticulous records kept during cable-laying, precision measuring equipment usually helps engineers locate a break relatively quickly. But the section of damaged cable must then be recovered and repaired.
In ‘shallow’ water a robot is used to hoist the cable to the surface. If the damaged cable is more than 2,000m deep, the repair ship uses grapnels to lift it. Of course, if the cable’s buried under tonnes of debris caused by an underwater earthquake/landside, no amount of grapnel-fishing will work. A new section of cable is laid.

In the Beginning
The evolution of the submarine network began more than 150 years ago – a journey arrested by frequent hiccups.
Soon after the development of the working telegraph in 1838, Victorian techies began discussing better communication between different continents. The first undersea telegraph cable was laid across the English Channel in 1850 by the Anglo-French Telegraph Company using a converted tugboat, the Goliath.
The 27-mile copper cable ran from Dover to Cape Gris-Nez in France. It survived only a few hours, but it proved the concept worked and it wasn’t long before financiers and entrepreneurs began contemplating a trans-Atlantic cable.

Like the pioneering Goliath, early cable-laying ships were converted vessels. Among the most famous of these was the Great Eastern. In the mid-1800s she was world’s largest ship, built to carry passengers between Europe and America in splendid luxury. At this she was a miserable flop, but her immense hull was ideal for carrying a trans-Atlantic cable.
As with the trans-Channel cable, the first trans-Atlantic cable required a few attempts, beginning in 1857–58 and finally succeeding in 1866. Its first ‘official’ message – from Queen Victoria to US President James Buchanan in 1858 – ran to 509 characters and took a leisurely 17 hours and 40 minutes to transmit.
Purpose-built cable ships began arriving in 1874, with the Faraday launched by Siemens Brothers, and from then on progress was rapid. Today’s leviathans are high-tech beasts that route and lay their cargo with pinpoint accuracy. One of world’s biggest operators – Orange Marine – has already laid over 180,000km of fibre-optic cables. Its six cable-laying ships represent 15% of the world’s fleet. 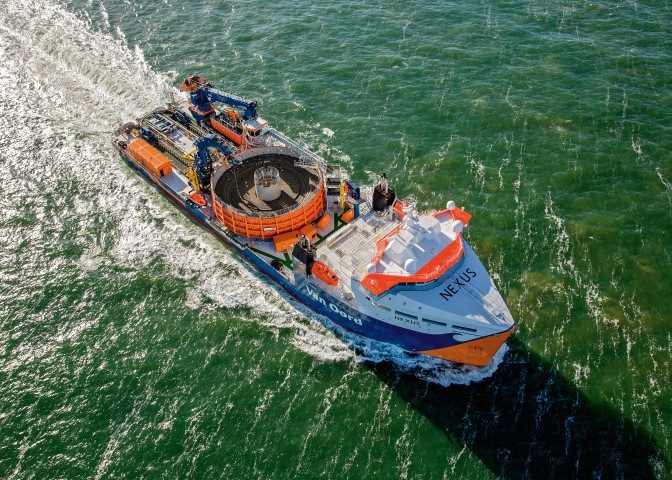 Stronger, faster cables
Advances in the ships were complemented by rapid progress in cable technology – and because revenue was directly related to transmission speed and capacity, much of the drive stemmed from the need for ‘faster’ cables. In 1956 coaxial telephone cables began replacing copper telegraph cables and, in 1988, the first fibre-optic cables were introduced, establishing the backbone of today’s internet.
Today, esoteric technologies such as ‘optical amplification’ and ‘wavelength-division multiplexing’ have enabled a meteoric increase in speed and capacity – from a few hundred Megabits per second at the end of the 1980s to over 20 Terabits per second today.
So the next time your mate assures you that all your explicit stag party images are securely stored in ‘the cloud’, safe from prying eyes, it’s worth considering that to get there they travelled along a very deep, unseen network, witnessed only by
a few curious sharks. 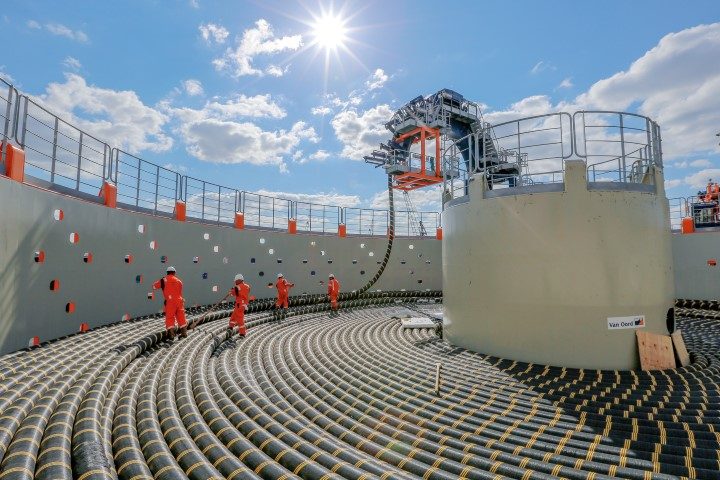 The Appeal of Motor Yacht with the Advantages of a Catamaran