One man’s rubbish, so the old adage goes, is another man’s gold. In some cases, though, the riches aren’t material – their worth is in experience and life-lessons. Decades ago, as a young boy determined to learn the arts of hands-on seamanship, Lindsay Wright found a berth on the scow Success, gathering rubbish and gash (galley scraps) from ships in Port Wellington.

All the waste was quarantined so, after chugging around the overseas ships, we’d motor down Evans Bay and discharge at a wharf where our cargo was incinerated. It was a great ship-handling education, going alongside the towering steel hulls in all sorts of weather while crewmen craned their refuse to land on the Success’ deck. Drums of borscht from the Russians or chow mein from the Chinese.

The 21m hard chine scow was built by D.N. Darroch at Stanley Bay, Auckland in 1925 – the last and the smallest true scow built in New Zealand. Originally named the Alwin G, she’d never had a hold and with a draft of about a metre, she had some handling idiosyncrasies that would make a saint swear.

Her two 4LW Gardner diesels developed 60 Clydesdale horsepower and drove through 2UC Gardner gearboxes, each with enough metal to build a Toyota Starlet. The controls were two large bronze levers that protruded from the front of the wheelhouse: in neutral they were straight up and down, a two-handed shove moved them to the right to engage forward gear and another two shoves in the opposite direction clunked them through neutral and into reverse.

The throttles were operated by rods with little plastic knobs on top that poked from the top of the dashboard. Pulling them upwards as hard as you could gave full throttle and all the way down was idle. Our 1,200rpm cruising speed was somewhere in between. 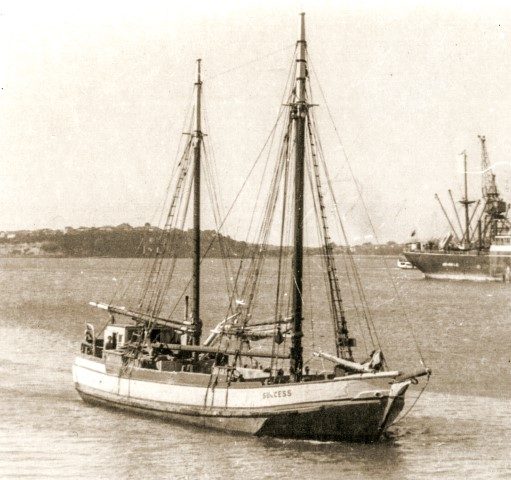 Steering was by a traditional wooden ship’s wheel with a diameter that almost matched my height. Turning it moved a heavy chain on a sprocket, out to a turning block on deck beside the wheelhouse and back on each side through other blocks and onto the tiller arm. So each turn of the wheel entailed dragging 20m or so of heavy steel chain across the deck before it even began turning the rudder.

As deckhand I wielded a spring line which was armed with a heavy steel hook on the end. As we neared a ship I would slip the hook into whatever was in reach: an open porthole, steel eye welded to the ship’s topsides or scupper edge.

Once fast to the ship, I’d spring Success to a standstill while Jack MacDonald, the skipper, gave several blasts on the horn and the ship’s crew scrambled to lower their rubbish to us. On calm days Jack would let me manoeuvre the unwieldy old scow, an operation akin to conducting an orchestra of hyperactive violinists. 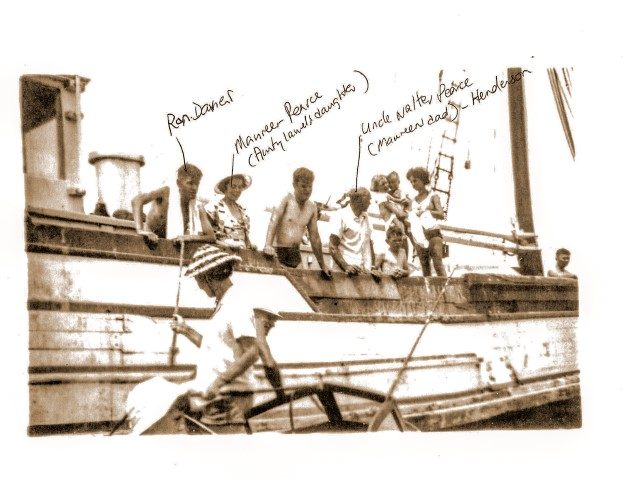 With not much boat in the water and the wheelhouse right aft, Success tended to take charge at slow speed – so you’d nose in towards the ship as fast as you dared, push the throttle knobs down, take one engine out of gear, rattle clunk some helm on, lift the throttle knob for extra shove, put the opposite engine astern and lift the knobs to give full astern on both – then close the throttles, de-clutch the engines and run down on deck to use the spring line.

Jack would stand in a corner of the wheelhouse and watch with a grim look on his weathered face. “You’re going to kill yourself with that bloody spring line one day,” he’d say – which was his way of saying “Well done.”

One day as we chugged down Evans Bay, drums of refuse lining the bulwarks and the two of us in the wheelhouse, Jack, in an unusually talkative mood, pointed across the harbour and said: “I joined the Pamir there.”

I hadn’t known he’d been on the legendary Finnish barque which was seized as a WW ll war prize by the New Zealand Government. “Wow – that must have been great – a real sailing ship,” I replied.

Jack grunted. “Signed on as bucko (ordinary seaman) for the last trip – back to England after the war – across to Aussie and then round the Horn.”

“What was it like?” I asked, keen to hear about the last commercial windjammer rounding Cape Horn, towering masts and clouds of sail.

“Huh – we were in the Southern Ocean – getting along at 12 – 15 knots and I chucked a bucket over the side for water to do the dishes. Bloody thing filled with water and dragged me the length of the deck – couldn’t hold it. I let go of the lanyard at the break of the poop deck.

“The mate was on watch and saw the whole thing happen – he jumped down from the poop deck into the waist and gave me a good clout behind the ear. I had to make a new bucket during my time off on Sunday and they docked the cost of materials off my wages. 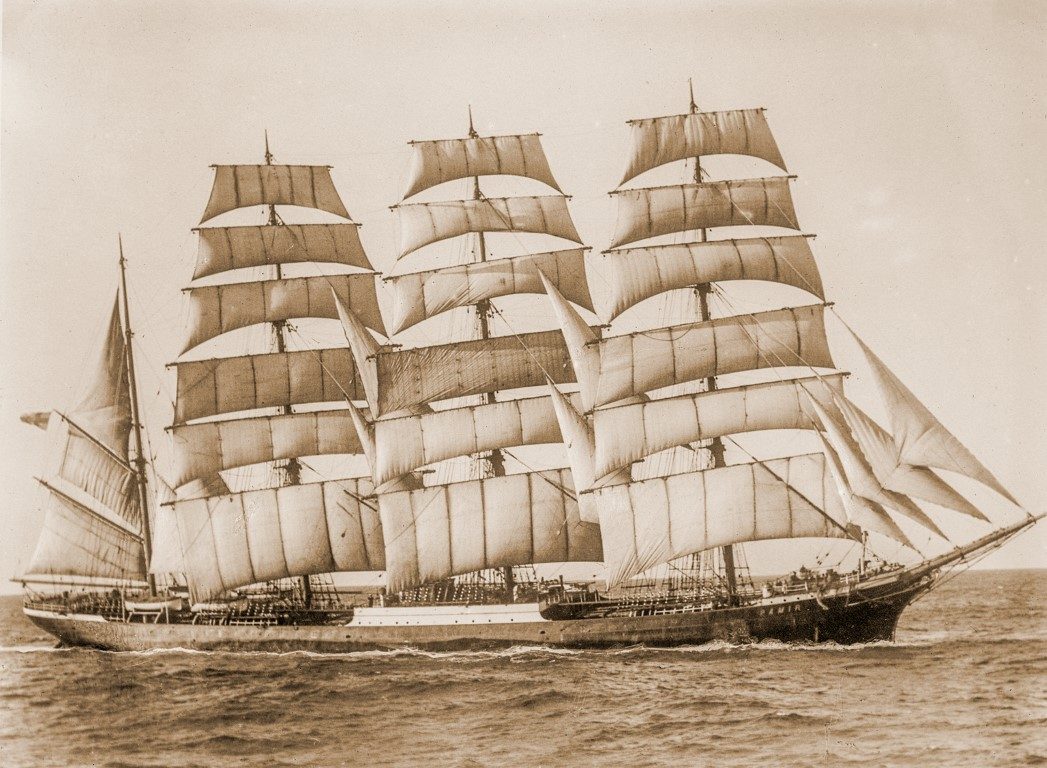 “And they logged me. The big ship’s log lay open on a desk in the aft cabin with an entry ‘Bucket lost overboard due to carelessness by O/S J. MacDonald,’ and I had to sign it.”

In those days (1948) an entry against a crew member in the log could spell the difference between signing on a ship or being passed over for some other seaman.

On arrival in the post-war dowdiness of England, Jack spent a few months “on the beach” before signing on for passage home in foreign-going steamers. “Bloody great,” he grinned at the recollection, “you got to spend your whole off-watch in bed.”

He continued his upward ascendancy “through the hawse pipe” to able-bodied seaman, second mate, chief mate and master of Union Steam Ship Company vessels on the New Zealand coast.

Jack had been widowed and took the job on Success so he could stay close to home and raise his family.

We neared the wharf, vague through the rain-streaked windows. “You’d better get your bloody lines ready,” he ordered.

Success/Alwin G is still around, currently on the hard in Nelson. A group of maritime heritage enthusiasts is investigating her possible purchase with a view to restoring her. 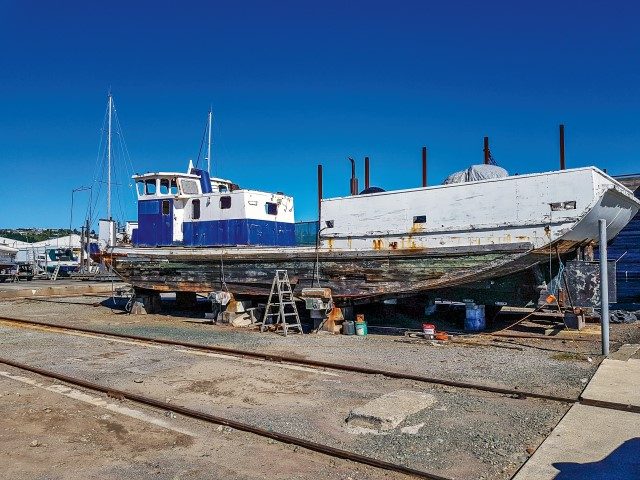 It’s estimated around 130 similar scows once plied New Zealand’s harbours. Commonly referred to as ‘trucks of the sea’ they were the backbone of maritime transport and played a major role in the country’s early development. Of these, only three original scows remain – the Jane Gifford, the Alma and the Success.

Beautifully restored, the Jane Gifford is a popular tourist attraction in Warkworth, north of Auckland.

It’s estimated around 130 similar scows once plied New Zealand’s harbours. Commonly referred to as ‘trucks of the sea’ they were the backbone of maritime transport and played a major role in the country’s early development. Of these, only three original scows remain – the Jane Gifford, the Alma and the Success.