Today’s boat security systems protect your pride and joy against theft, accidents – and even angry birds. By Craig Ritchie.

Once upon a time it took nothing more than a couple of sturdy ropes and a few good knots to ensure your boat would remain safely at the dock until you returned.

Today … not so much.

The sad reality is that we now live in a less innocent world where boats, like anything else of value, can attract unwanted attention from thieves. Some aim to steal the boat, others, only its contents. In either case it’s the owner who’s left to file the insurance claim and deal with the loss. Little wonder then that many boaties worldwide have begun to show greater interest in boat security systems.

The rapid development of marine security systems has been fueled partly by need, and partly by opportunity. With the advent of the Internet and the proliferation of digital technology, today anyone can pull out a smartphone and instantly see what’s going on aboard their boat, at any time, and from anywhere in the world.

Apart from protecting a boat from theft, today’s systems allow owners to keep watch over a variety of possible perils, monitoring and reporting any trouble straight to your smartphone or a security service, 24 hours a day, seven days a week.

Even if you keep your boat in a highly secure marina where theft is unlikely, today’s remote monitoring systems still let you keep tabs on everything from water levels in the bilge to shore power connections and more. And not just monitor, but control. Forget to turn off a light? No problem – there’s an app for that.

This enhanced connectivity is what has allowed simple boat alarms to morph into much more sophisticated monitoring systems. Choosing the one that’s best for you comes down to how much you want to spend, and exactly what you want it to do.

“When we think of boat security, we tend to think of someone driving away with the boat,” says Brian Kane, chief technology officer at Global Ocean Security Technologies (GOST). “But a bigger problem is people boarding the boat to steal electronics or big screen TVs, or to steal liquor and have a party. 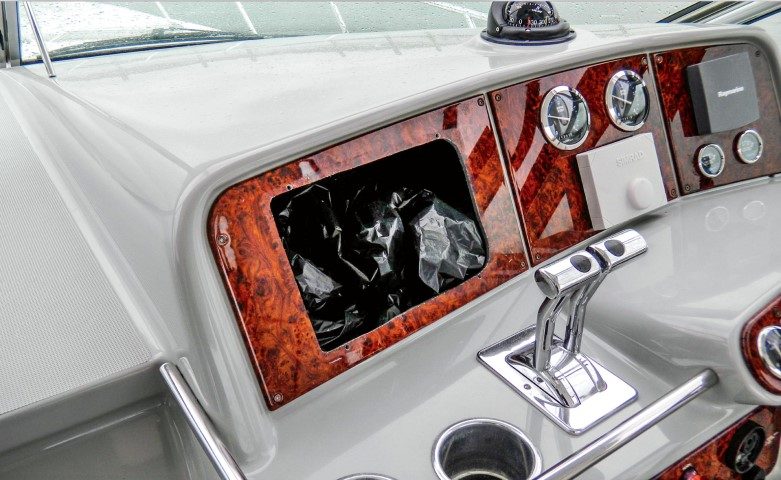 “Sometimes boats are broken into and used as temporary housing. Without some kind of monitoring system, the owner has no idea until they physically return and find their boat is a mess after being used as a flop house by people doing drugs. If it’s not humans, it’s animals – birds and other animals can do a huge amount of damage if they move into a boat. Monitoring systems are meant to guard against all of these things and give the owner peace of mind when they’re not personally on board.”

If your primary interest is in simply guarding against theft or house-hunting wildlife, a local alarm may be all you need. The original anti-theft device, local alarms use a variety of sensors to determine when someone (or something) steps aboard. Failure to enter the cancel code within a specified period of time activates the alarm.

Much like a car alarm, these systems alert other people nearby that an intrusion is in progress. Accordingly, local alarms work best in areas where there will always be someone there to respond, such as a marina with a fulltime security guard.

The main attraction to local alarms is their comparatively low cost. Aqualarm (aqualarm.net) sells a wireless boat security system for about $300, complete with a keypad, two sensors for mounting on doors or hatches, and a remote-control key fob. Its 110-dB siren is built into the control panel for easy DIY installation. Flagship Marine Security (boatalarm.com) sells a similar system, which also provides the option of adding canvas sensors.

The challenge with local alarms is that they rely on someone else to respond on your behalf whenever you’re not around. So what if an intrusion takes place when there’s no one else within earshot, such as when boats are left in remote locations during off-season storage?

Newer theft-deterrence alarms deal with that scenario by taking things up a notch. So-called acoustic barrier alarms like those offered by GOST (gostglobal.com) and others don’t just make a loud noise, they emit an unbearable racket that immobilizes wouldbe thieves by targeting the inner ear, disorienting the sensitive Otolith organs and the Semicircular Canal.

The result is near-instant dizziness, nausea and vertigo, compounded by an inability to determine the source of the sound. Acoustic barriers literally stop thieves in their tracks, and keep them there until police can respond and shut it down with their own access. Some systems can effectively protect areas of up to 70m2 . 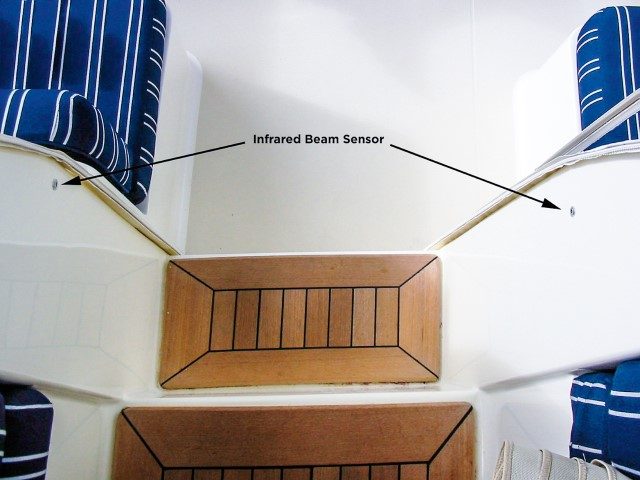 Cloaking (also offered by GOST) is another form of theft deterrence that makes it impossible for thieves to continue their work. Like something out of a James Bond film, the cloaking device immediately floods the boat in a super-thick, pea soup fog that’s created by vaporising a specially formulated glycol solution.

In seconds, visibility drops to virtually nothing, making it impossible for would-be thieves to see anything at all – much less steal it. The fog is completely harmless to both the criminals and your gear on board, including sensitive electronics. Used alone or in conjunction with an acoustic barrier, it too stops thieves in their tracks until police arrive.

While local alarms are effective at deterring theft and warding off intruders, systems that offer a remote monitoring capability are even better. Once activated, these devices alert the boat owner to any alarms with a text, voice or email notification that’s sent over either a cellular or satellite-based network.

Siren Marine (sirenmarine.com) offers cellular-based intrusion alarm systems starting at about $500 that allows remote monitoring via a companion smartphone app. The system can also control the sensors on your boat, and allows optional upgrades to add features like high water and low battery alarms, along with GPS tracking and eco-fence capabilities. Installation is easy, certainly within the capabilities of the average DIYer.

The Spot Trace (findmespot.com) is another popular and compact remote communication alarm system. This $100 GPS device mounts in the boat and sends you email alerts if it detects unauthorized movement. You can even track the boat’s progress online using Google Maps. The system requires a subscription service, but the relatively modest monthly fee could be more than offset by savings in your boat insurance.

For those who prefer it, the company offers an enhanced system called Spot Hug, which tracks your boat’s position and reports the activity to a monitoring centre. Spot Hug can work with additional sensors such as high-water bilge alarms and smoke detectors to provide additional levels of protection.

C-Pod (c-pod.com) is a Swedish company which offers a similar system that can track the boat’s location by GPS and send text alarms to your smartphone if your ride starts heading off without you. The system works anywhere in the world, and can be configured to work with additional sensors to detect intrusion, high bilge water and smoke. Best of all, it’s two-way compatible so you can use C-Pod to switch on the bilge pumps or fire up appliances like heaters, air conditioners or refrigerators before you even leave for the marina.

For those looking for an all-in-one monitoring package operated by an intuitive smartphone app, Italian marine antenna manufacturer Glomex offers its innovative Zigboat system (zigboat.com). The easy-to-install system uses either a 3G cellular or Wi-Fi connection, so there’s no need for registration or a monthly subscription.

The basic starter kit includes a central processing unit, a battery sensor, a bilge flood sensor and a port/door intrusion sensor, all of which connect to the internet using the Zigbee wireless protocol. Additional sensors, including shore power monitors, cameras, GPS tracers, lighting controls, smoke alarms and motion sensors, can be purchased individually, allowing owners to build a fully-customised system to suit their specific needs. All of it runs on a single, intuitive mobile app that works anywhere in the world.

While it’s great to have your boat alert you when something goes wrong, what if you’re not available to respond? Email notifications received while you sleep do nothing to stop a thief, and that’s precisely why fully-monitored alarm systems represent the ultimate in boat security. The range of options is limitless, and pricing varies widely depending on what capabilities you choose.

EyeOnBoard (eyeonboard.com) is a camera-based system that uses wireless technology to simplify installation and eliminate the need to thread wires through bulkheads. The unit uses an onboard PC to connect to a marina’s Wi-Fi network for monitoring, and provide bonus internet access when you are onboard. There’s no smartphone or tablet app, but onboard equipment can be controlled remotely via a user login page on the company’s website.

GOST offers a wide variety of monitoring system packages that can include one or more high-definition cameras, a digital video recorder to store security footage, and even a separate system for tenders that can immobilise an outboard engine. Rather than cellular or Wi-Fi, GOST communicates using the Inmarsat Isat M2M satellite service, so it works even during power outages.

Whether it’s protection from thieves or just a lost possum looking for a new home, marine security systems provide boaties with tremendous peace of mind. Beyond protecting against uninvited guests, their ability to remotely monitor bilge levels, battery levels and more can help protect against potential trouble that has nothing to do with theft. And, the option of being able to fire up equipment like air conditioners or refrigerators while you make your way to the boat brings even greater levels of convenience and enjoyment.

In the good old days all it took to secure your boat was a rope and good knots. But in these good new days, remote monitoring systems add so much value that it’s hard to imagine why any boatie wouldn’t want one.

Whether you have a remote monitoring system or not, the best way to keep thieves away from your boat is to keep it in places they find unattractive. That means behind a locked gate and in a well-lit space that’s open to watchful eyes.

During the season, choose a marina that has security gates that restrict dock access to keyholders only. Facilities that also have 24-hour security patrols, or live-aboard boaters, are even less attractive to criminals.

If you have to store the boat on its trailer, make it hard to steal by removing the wheels, removing the coupler, or chaining it to other boats. The best storage is in a locked indoor facility with a 24-hour security presence. Otherwise, do anything you can do to make your boat more trouble than it’s worth, so thieves will simply move on to easier targets.