What began as a 60th birthday-present-to-self became an around-the-world yacht race for a New Zealand couple. They’re among the crews on a fleet of 11 identical 70-foot yachts competing in the 2019–20 Clipper Race, and because they’re on separate boats there’s also a little marital rivalry… Story by Lawrence Schaffler.

Paul (60) and Dawn (55) Widdowson are from the Hibiscus Coast, north of Auckland. While both are experienced sailors (they own a Whiting 45), a bluewater passage was uncharted territory. They wanted to change that – and address other Bucket List items flitting through their dreams. 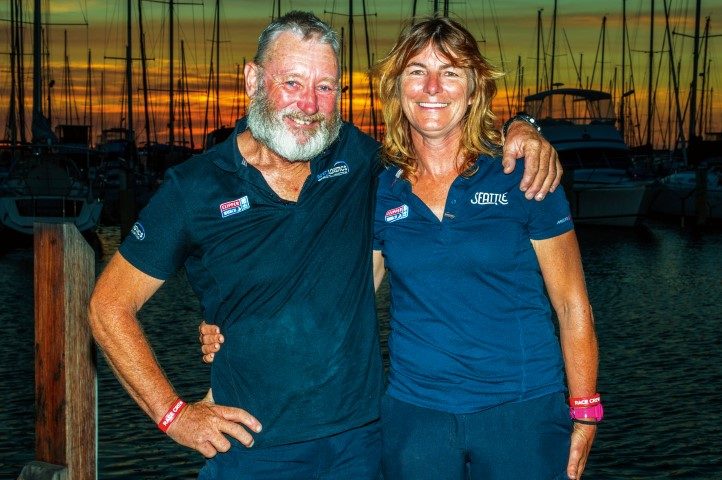 “I’d just turned 60 and felt the milestone deserved a decent reward,” says Paul. “We both wanted to cross the equator under sail – and voyage into the Southern Ocean. Joining the Clipper Race seemed a good way to tick these boxes. It would also see us celebrate our wedding anniversary at sea – albeit on different boats.”

“We originally discussed doing maybe two or three of the eight legs,” adds Dawn, “but then Paul came home one day and said why don’t we just do the whole lot? I said sweet, fine, let’s do it – I mean it is his 60th, isn’t it?

So we decided to quit our jobs and do the entire race over 11 months – the full 40,000-mile circumnavigation.”

I caught up with them in Fremantle soon after their arrival from Cape Town – the race’s third leg through the fearsome Southern Ocean. Paul’s yacht is WTC Logistics – Dawn is on Seattle. Despite a little damage to both yachts, they were in good spirits. They are two of 13 Kiwis among the event’s 700-plus crew members – and the only married couple. 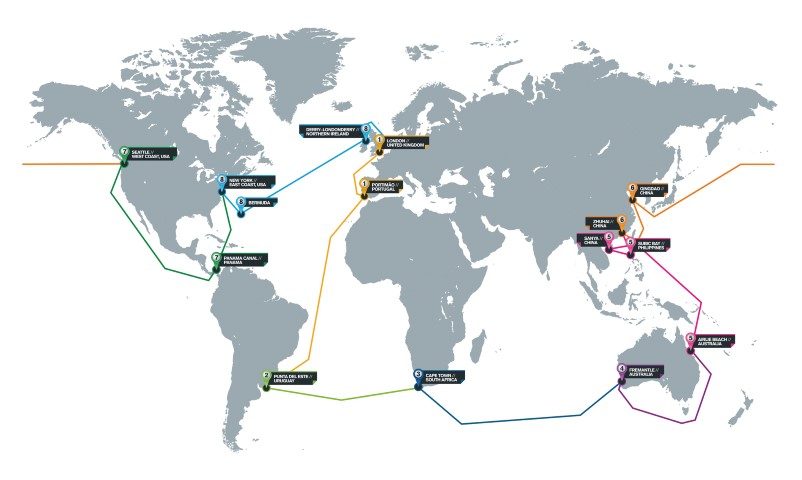 The first Clipper Race was held in 1996 and it is staged biennially. It was established by William Ward OBE and Sir Robin Knox-Johnston, the first person to sail solo, non-stop around the world.

Now in its 12th edition, the race is renowned as one of the toughest endurance events on the planet – a soul-searing test of fortitude. It’s also unique in that it’s the only global yacht race for non-professional sailors. Crews can join for the entire race (as Paul and Dawn have done) or opt for one (or more) of the eight legs – and pay the corresponding fee.

Crews are made up from people of all nationalities and from all walks of life – around 40% have never sailed before. While they must be at least 18 there is no upper age limit – the oldest competitor in this edition is 76. At their age Paul and Dawn are at the ‘seasoned’ end of the spectrum, but say they are “quite young at heart and like to pretend we inhabit 40-year old bodies.” 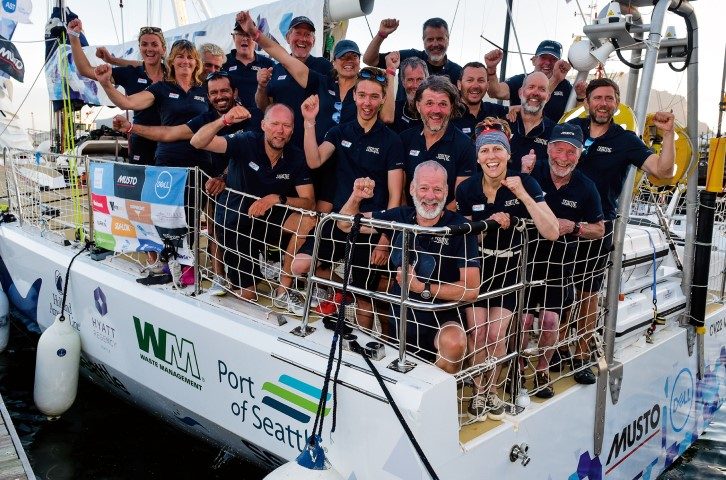 Each team (up to 24 crew per boat) is led by a professional skipper and first mate. In this race the 700-plus sailors represent 43 different nationalities, making it the most international edition to date. Because many crew members are complete novices, everyone undergoes fairly intensive training months prior to the start. The Widdowson’s preparation included two weeks of training in Sydney in October 2018 (Level 1 & 2), followed by Level 3 & 4 in London prior to the start in September last year.

This year’s event includes a series of 15 races. Points are awarded for each race and the team with the highest cumulative points at the end wins the Clipper Race trophy.

What’s that all about? A tactic to test (or preserve) a marriage?

“Race organisers prefer relatives to sail on separate vessels, and actually we didn’t have an issue with it,” says Dawn. “It’s better in the sense that it allows us to have individual experiences and react to the race in different ways. If you’re on the same vessel you’d have nothing to talk about because you’ve already shared everything.”

Besides, there’s plenty of work to be done at sea. Everybody does everything – from ‘mother duty’ (cooking) and cleaning the heads to helming and changing sails at odd hours. “Having said that, not everyone is comfortable working up at the bow,” says Dawn, “so some people prefer not to get involved with jib changes and retrieving spinnakers.” The Clipper 70 carries 1,530m2 of sail area. 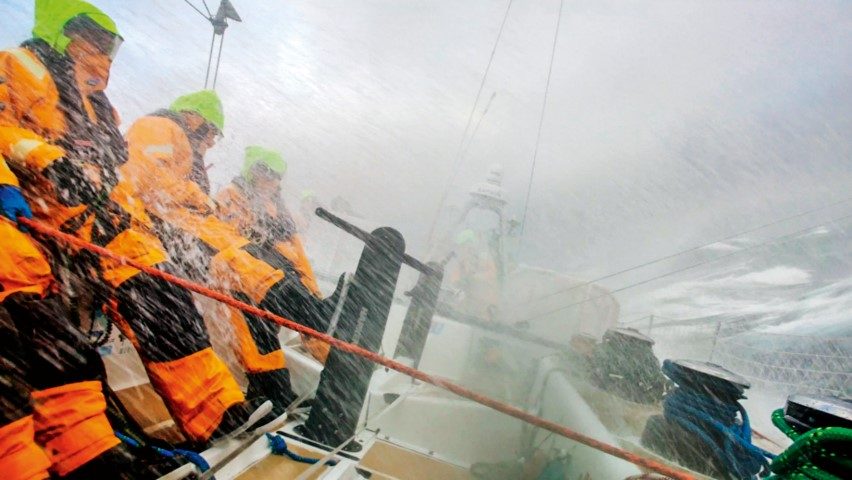 Did the Southern Ocean live up to its reputation? “We had a relatively easy passage,” says Paul. “Race organisers restrict the route to keep the yachts away from icebergs. On both legs (from Punta del Este to Cape Town and Cape Town to Fremantle) we were limited to 44o South. So it was relatively calm – though it was freezing between Punta and Cape Town.

“Still, the wind on the Fremantle leg was well over 40 knots with 7-8m seas and running before them involved a lot of spinnaker work – though it was often too rough and impractical to fly a spinnaker. Instead we played with combinations of the three yankee headsails and staysails.”

He confesses he could only guess the wind strength because WTC Logistics lost her anemometer about two days out of Cape Town.

The worst weather the fleet experienced, adds Dawn, was coming into Uruguay where they were battered by vicious gusts and squalls. “Seattle was knocked down in a 73-knot gust. I was holding on to the Yankee sheet for dear life, thinking holy crap – are we going to lose our mast? Where’s the liferaft? Is everyone OK? Looking owl-eyed at the skipper on the helm. But even then, I thought, right – this will pass, everything will be sweet.”

But on the leg to Fremantle, about 10 days out of Cape Town, Seattle suffered another knock-down, and this one smashed the starboard helm station, forcing the crew to steer the rest of the way with just the port helm.

“The leeward helm was very uncomfortable on a starboard tack – you’re constantly buffeted and saturated by waves washing down the decks – very wet, scary and not at all enjoyable.”

Dawn also morphed into the ‘sail repair’ guru on board Seattle and took six days to sew together a blown spinnaker.

On a voyage like this, says Paul, “you learn a lot about yourself, about the sea, about life. The sailing is the easy part – even though it’s very different to what we’re used to. One minute you’re cruising at 12–15 knots and then – in the blink of an eye – you’re surfing down a wave at 30 knots and concentrating like hell!” Much more difficult is the crew interaction. “It’s really tricky with so many people in a confined space.

You’re tired and uncomfortable – and every time you have a watch change, someone’s in your way. You have to be careful not to offend anyone, because it can fester and turn ugly.

“You’re having to co-exist with 20 other people from different walks of life, with different standards and values, from different cultures. You have to cater for those differences – even different food – and it can be frustrating. But you have to deal with it – you can’t get off – you learn tolerance very quickly.” 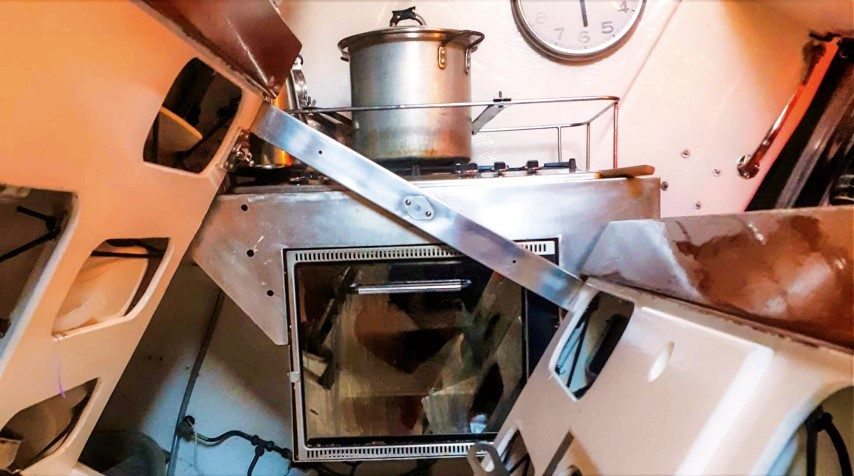 Dawn has more complex and ambivalent sentiments. She swings between loving the sailing and hating being on board. “Every day I hate it and every day I love being here. I’m a Watch Leader and sometimes it’s difficult because you have to tell people to do something. But they don’t listen and won’t do it. You’re tired and wet and cold, and trying to motivate others can be very hard.

“Personal relations can be very frustrating, and it can be very lonely at times. Sometimes they don’t like what you say, and then they don’t talk to you. I have to put my confidence in other people and sometimes I struggle with that. The reality of it is there’s nowhere to hide on the boat!”

But the raw, elemental part of the sailing, she says, is priceless. “The colour of the water, the sky and the clouds. The vastness of the sea and the sky – I absolutely love it. Surfing down 8m waves is awe-inspiring rather than terrifying – and they are beautiful. The wildlife, of course, is extraordinary. Plenty of whales and dolphins, and the Southern Ocean’s full of magnificent birds – I love the way the albatross follow you for ages.

“So despite my dilemma I will be there to the end. It’s a huge life-learning experience – they can’t get rid of me!” So, who’s leading? Or is that a sensitive question? 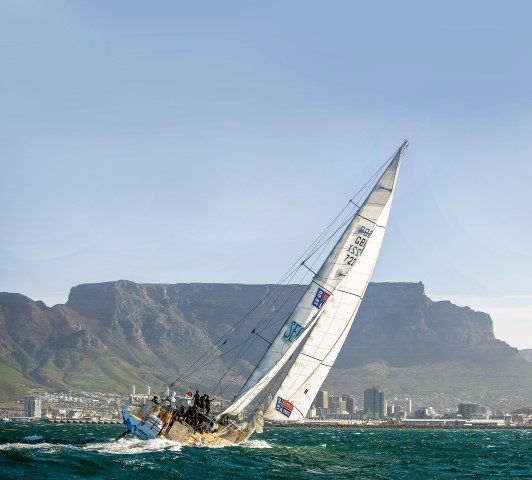 “Not at all,” says Dawn. “As we stand in Fremantle, we are two-all. Seattle beat WTC Logistics on the first two legs – and we let them win the next race. Unfortunately, we had a few issues on Seattle during the last leg (the AWOL starboard

helm) and they beat us into Fremantle by two days. But there’s a long way to go…”

Contact with family and friends is rare. “You can buy credits to use the boat’s satellite phone or email. Paul and I have chosen not to do this – and in any event we can see each other’s position from the race updates we receive.”

So their two sons and two granddaughters – and the legions of friends – have to rely on following the race on its website, and wait for calls during the port stopovers.

“Some of our friends are envious of what we’re doing,” says Dawn, “but lots think we’re totally nuts, tackling something like this at our age. But at night, steering the yacht across a wild sea under star-studded skies, you feel alive. It’s very special.

“And do you know what I think about during those lonely hours on the helm? What we’ll be doing for my 60th “I hope he’s ready.”