New Zealand’s maritime history is full of famous vessels. Boats that have won races or endured epic voyages to high latitudes. But in the 1970s the 13.4m yawl Brigadoon became a household name for all the wrong reasons.

Named after a fictional Scottish village in the 1947 Broadway musical Brigadoon by Alan Jay Lerner and Frederick Loewe, the shapely steel yacht was drawn by the Dutch designer, Enricus Van de Stadt.

The story goes that a larger version of the design visited Auckland in the 1960s. Local menswear retailer, Brian Johnstone, fell in love with the yacht and commissioned a smaller sister ship to be built by Cable Price Ltd.

Building started in 1967 and two years later Brigadoon settled into the tide for the first time. The 13.4m hull was built in 5mm corten steel, an alloy developed for outdoors use, and weighed in at 15 tonnes, giving her a staunchness that would serve her well during the next notorious periods of her life.

Johnstone kept the boat briefly then sold her to an unknown buyer, who, in turn, resold her to Martin Johnstone (the son of Brigadoon’s first owner) in 1975. And that was when things began to go wrong for the graceful yacht.

Johnstone junior was a drug smuggler and dealer who later became known as ‘Mr Asia.’ Most of his illicit shipments were smuggled by crew from foreign-going ships, but Brigadoon was to be the means for taking his operations to the next level.

He had organised for the yacht to pick up 450,000 Thai (‘buddha’) sticks from a manufacturer in Thailand, sail back to New Zealand and smuggle them ashore at a Northland beach. The buddha sticks were made of dried marijuana heads tied to slivers of bamboo with thin jute string, and in New Zealand the cargo had a street value of about $4 million.

Peter Miller, whose sailing experience amounted to a few Hauraki Gulf cruises and an ‘amateurish’ course in navigation, was engaged as skipper and two brothers from the North Shore joined as crew.

The voyage was marred by problems – sea sickness laid the crew low, meat and other perishables rotted for want of refrigeration and Miller’s erratic navigation sailed them into a maze of reefs northeast of Noumea where she went aground at least six times.

They finally found Noumea, in those pre-GPS years, and one of the would-be drug smugglers was arrested for shoplifting. The local gendarmes were suspicious and, while checking out his credentials, contacted the New Zealand Police who instructed them to release the crewman because the yacht was subject to ongoing surveillance for smuggling drugs. 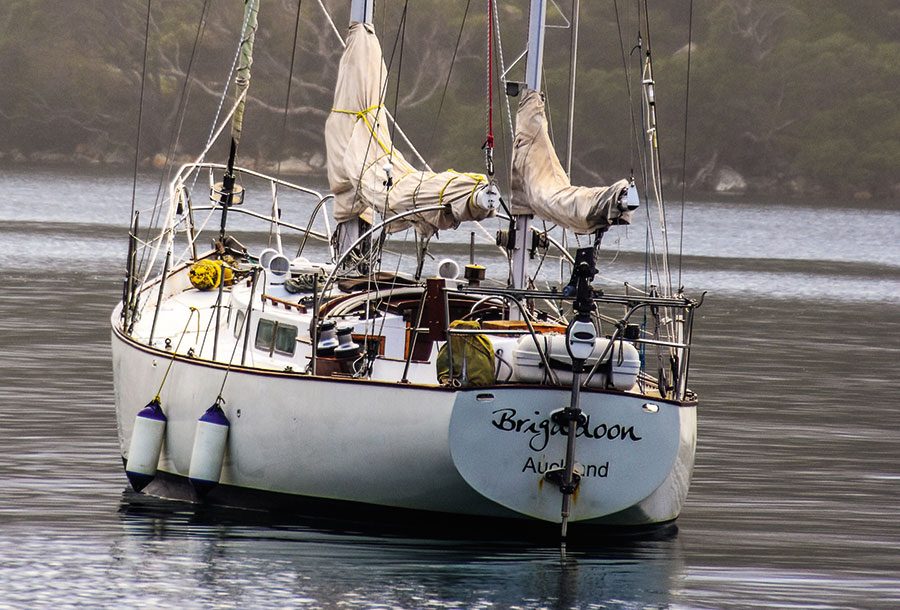 Eventually, Brigadoon sailed into Bangkok and was escorted upriver to a fortified drug-processing village with an armed guard of Thai police. Every square centimetre of spare space was stowed with the 39 bales of marijuana sticks and Brigadoon set sail for home.

Two crewmen contracted malaria and were left at Makassar because Miller realised he wouldn’t be able to clear customs into Indonesia (where drug smuggling is punishable by execution). A plan to dump the drugs on a nearby island was dropped but Brigadoon and her remaining crew were subsequently held for three weeks on charges of entering Indonesia without a visa. The two malarial crew got medical help and ended up performing as entertainers in a tourist hotel to earn the fares home.

Meanwhile, aided by the skipper’s indifferent navigation skills, Brigadoon went aground six times in the Timor Passage and eventually stumbled into north Australia. 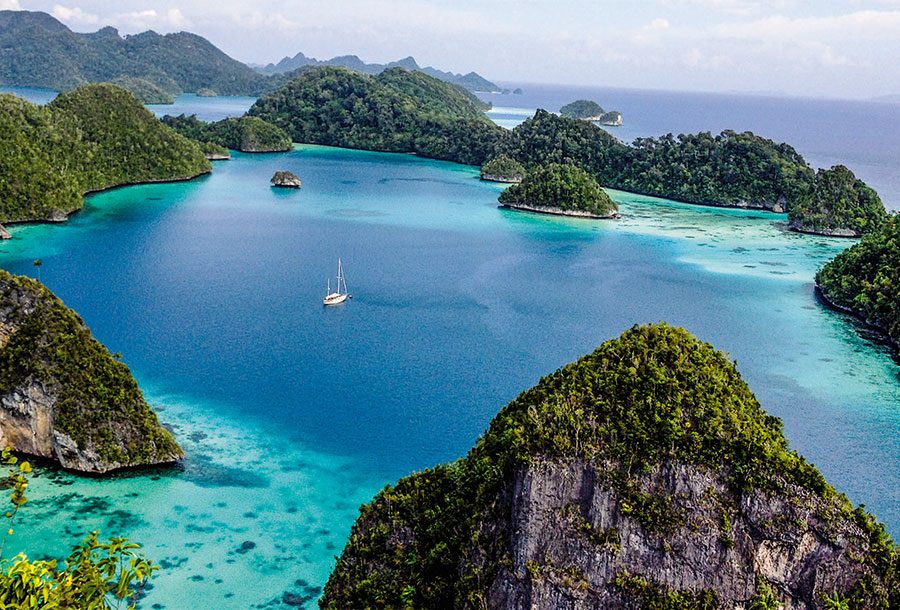 From Australia, she was towed to New Zealand by a boat salvage skipper with an old Asian fishing vessel. But the run of bad luck continued. She went aground while closing with the coast to discharge her cargo, and when Martin Johnstone turned up with a power boat to take the bales ashore, it promptly broke down, so most of the marijuana sticks were rowed ashore in an inflatable dinghy. During one of these runs, Johnstone was tipped out of the dinghy by surf and washed up onto the beach, bedraggled and surrounded by sodden bales of dope.

Brigadoon’s ordeal at the hands of the drug smugglers would have broken a lesser vessel but her staunch construction had seen her survive virtually unscathed. After news of her role in New Zealand’s burgeoning drug culture became known though, Brigadoon’s name became a household word and her notoriety spread. 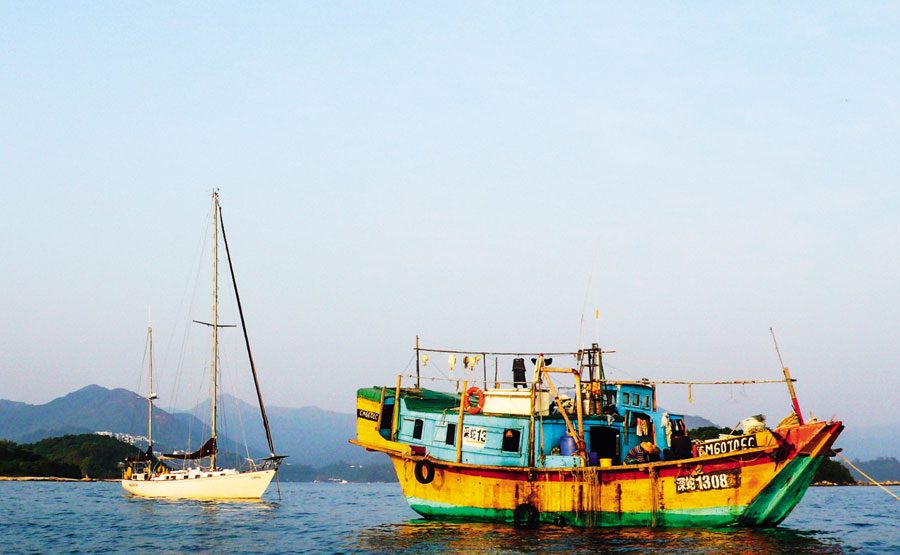 But her sailing career took a turn for the better when she was purchased by retired RNZN officer Lieutenant Commander Jeremy Hall and his wife Josephine (Jo) in the 1980s. Hall’s navy career had included being equerry to Queen Elizabeth II during the royal tour of 1953. He accompanied her around New Zealand and was quoted as saying “I tried to get her laughing – she had a good sense of humour – we could get the whole household in stitches.”

Perhaps his easy-going Kiwi informality did the trick for the two became firm friends and, on her next visit to New Zealand she popped into the Hall’s farm at Tai Tapu in North Canterbury for lunch.

The Halls set out on a circumnavigation in Brigadoon in the early 1980s raising money for charity as they went. One of Jo’s conditions for making the trip were that none of that “silly nautical language” was used aboard the boat and some of Hall’s old navy mates in London were astounded to hear that Jo was “in the kitchen making tea”.

A monthly newsletter was published about Brigadoon’s travels which enjoyed a wide readership and raised $12,000 for the Red Cross. After four years voyaging Brigadoon returned to New Zealand waters and eventually passed into the hands of Drew Hartstone, from a Raglan fishing family. Once again, Brigadoon’s sweeping sheerline, purposeful yawl rig and strong construction had caught the eye of an owner who knew boats and appreciated a good boat when he saw one.

Under Hartstone’s ownership Brigadoon was berthed at Westhaven, and was often seen around the Hauraki Gulf, on holiday adventures with family and friends. Then in 2007 she was sold to friends of his, Jackie and David Peers, an adventurous Lyttelton couple with a love of the sea.

David was teaching English in Hong Kong but that wasn’t too much of a hurdle and the deal was done. Once again Brigadoon had new owners who appreciated her fine lines and quality construction.

“She came with a full set of plans and diagrams and receipts for building and maintenance work,” says David. “We made one failed attempt to have her delivered by a delivery skipper – who shall remain anonymous.” Instead, they decided to ship her to Hong Kong as deck cargo on a container ship. A few months later they were summoned to the waterfront at 3am to take possession of Brigadoon and clear her through customs. 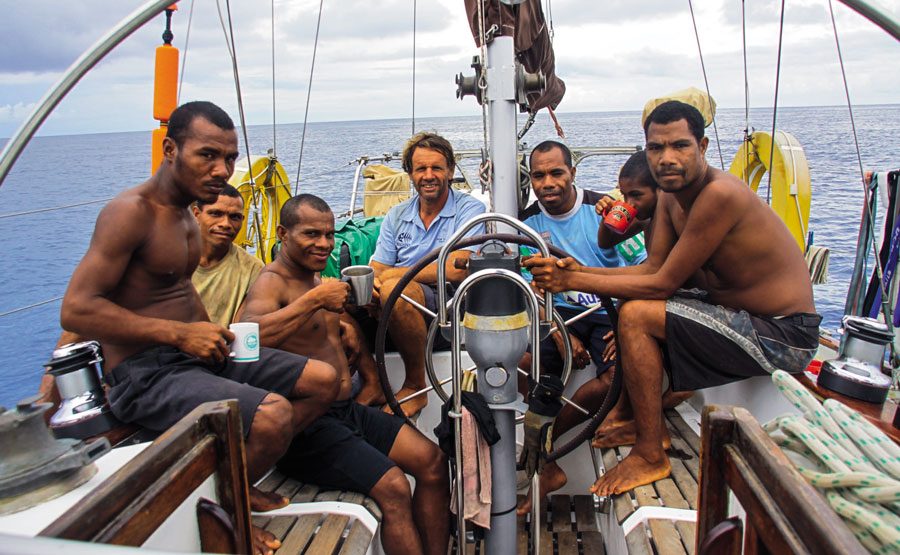 “I didn’t have a clue,” he recalls. “I’d never owned a yacht like Brigadoon before – and I’m not really very practical. So I hired a Filipino called Jesus to work on her on an occasional basis – he was great, he taught me just about everything I know about boat systems.”

Two years before his teaching contract was due to finish, the Peers moved aboard and began to cruise Hong Kong. “We joined the Hebe Haven Yacht Club – a very hospitable bunch of people. If we needed to go ashore we’d call on the VHF radio and a free sampan taxi would come and get us.

“Hong Kong is amazing – we spent a lot of time cruising east of the new territories and in many places the scenery was just like the Bay of Islands.”

Brigadoon raced regularly and took part in colourful events like the Round-the-Island and Macao races. She also won the Aberdeen Yacht Club classic yacht regatta. “We did three trips to the Philippines to get the hang of offshore sailing before we left.”

In 2013 Brigadoon left Asia again but this time as a much happier ship in competent, caring hands. It took the Peers two- and-a-half years to wend their way back to New Zealand with stops at the Philippines (where they weathered Typhoon Hayan – the biggest tropical storm system ever, at the time), Indonesia, Papua New Guinea (PNG) and the Solomons.

“Our philosophy is that we’re not very skilled sailors – so we just untie the lines and go and do it. We aim for unusual places, places that are rarely visited.”

Brigadoon lingered at the Rajah Ampat Islands in Indonesia, a reserve with the most diverse marine life in the world. “And land animals too – birds of paradise, sea eagles – wonderful. Giant rays metres across gliding under the boat.

“We had misgivings about going to PNG after we’d heard story from other yachties about thievery and violence. But we stopped at Ninigo Atoll and it was wonderful. We entertained the locals on board Brigadoon for five days with food, music and conversation. We had the boat speakers out and every night was singsong. They insisted on reciprocating, so we had another five days socialising ashore. Whew – a ten-day party….it was great. Things change hands by trading – there is no money – so it pays to take plenty of clothes and trade goods.”

This time round, Brigadoon’s trip south left a trail of smiling faces in her wake – her previous illicit passages have been outlived by her later travels. The real Brigadoon has prevailed.

“We still get people who come aboard and ask if we’ve found any secret compartments full of dope,” David smiles.

Mascotte - THE SINCLAIRS OF LYTTELTON PART 2