This problem is due to the nature of petrol, which is much more volatile than diesel. Simply, that means petrol evaporates at room temperature, and if you’ve ever spilled some on the ground you’ll be familiar with its strong smell and seeing it disappear before your eyes.

Since every fuel tank needs a breather pipe – and usually it’s only tote tanks that allow this to be closed off – it means almost every petrol tank suffers some amount of evaporation. This evaporation occurs at a greater rate if the boat is stored in the sun where the tank gets warmer than the ambient air temperature. 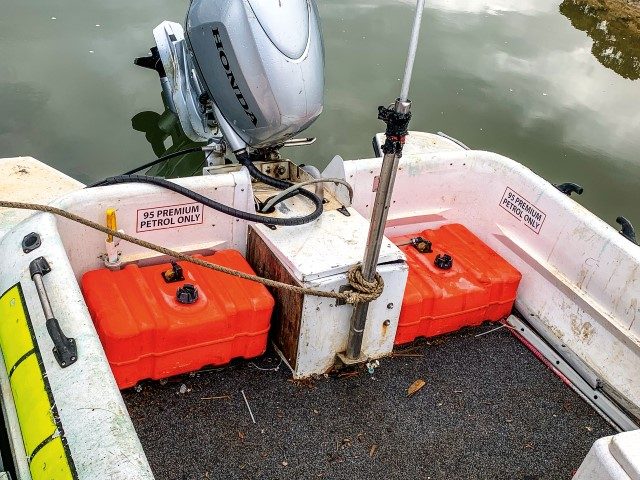 This may not sound like a major problem, and if petrol was made up of a single hydrocarbon it probably wouldn’t be. But the fuel we buy is a complex mixture of different components, each with specific properties that contribute to the performance we expect from our fuel.

Each of these components evaporates at different rates. Adding to the problem are modern biofuels that may contain up to 10% ethanol, which again has a high rate of evaporation. The lighter components in the fuel mixture always evaporate first, leaving the remaining fuel with a different ‘ratio’ than what came out of the pump.

This issue’s amplified if you have additives in your fuel, particularly if you use pre-mixed two-stroke oil such as for ancillary outboards or very old carburetted two-stroke engines. The oil (and most other fuel additives) doesn’t evaporate, so its concentration climbs higher and higher.

Eventually this will cause fouling of spark plugs and clogging of jets and pipes. And the lighter components of petrol, which disappear first, tend to be the elements that provide the higher octane needed for cold starting. This is one of the main reasons why it’s very hard to start a cold engine on stale fuel.

Interestingly, the octane rating of petrol will actually go up as the volatile components evaporate, since the remaining fuel has a higher density. But that higher octane is not available when cold, which is why we have trouble starting an engine that’s been unused for some time.

The denser fuel also causes the engine to run leaner when cold, causing higher temperatures, pre-ignition and, potentially, piston damage. This is especially evident in higher-revving engines such as outboards and chainsaws.

On older engines with carburettors the denser fuel can result in more fuel being introduced for a given volume of air (once you manage to get it started, that is!). This fuel-rich mixture causes its own problems, with carbon deposits fouling the plugs and exhausts. This problem affects older engines, especially in classic cars and older outboards, which can cause the engine to stumble and hesitate.

BUT WAIT, THERE’S MORE
According to the Fuel Newsletter from BP, fuel stored for long periods even in completely sealed containers can still oxidise to form peroxides. These compounds attack rubber and metal, causing hoses and seals to break down and corrode copper parts in fuel pumps.

The process is worse if UV light gets to the petrol (so DON’T store your tote tank on the deck for long periods) but under normal circumstances this will take a few months before it becomes an issue.

So, that’s the bad news.

What can be done to prevent any of this, and are fuel additives any use? The short answer is no – additives will not prevent the evaporation of the lighter components, although fortunately most modern fuels already contain anti-oxidants and other compounds that help reduce the other damaging side effects. There is a range of excellent third-party additives for fuel that may provide other benefits, but none of these will rejuvenate stale fuel.

The best prevention is to simply use the fuel before it gets stale, and don’t be tempted to store fuel for an extended period. If you are going to store fuel in tote tanks, keep them full, tightly-sealed and in a dark but well-ventilated place.
For very long-term storage you are better off emptying the tank completely and refilling it only when you are ready to use the boat again. This may be harder to do with a built-in tank, in which case keep the tank half-full and top it up before use.
If you do end up with a large quantity of stale fuel this can be safely burned up if it’s mixed with a greater quantity of fresh fuel. So, you could decant some of it into a half-empty fuel tank in your car or top up the boat tanks with at least half the volume being made up of fresh fuel.

You may suffer reduced performance due to the stale components and should run the engine conservatively during this time. Only if the fuel is extremely old will it be necessary to completely discard it.

And if you do land up with a nearly full tank of stale fuel that you cannot easily drain, there is a simple solution to starting your engine. There are a couple of aerosol products on the market that contain ether, a very volatile compound that can be used to substitute the missing components from your petrol.

One of these is the charmingly-named ‘Start ya Bastard’ from Nulon, available from auto and marine stores everywhere. 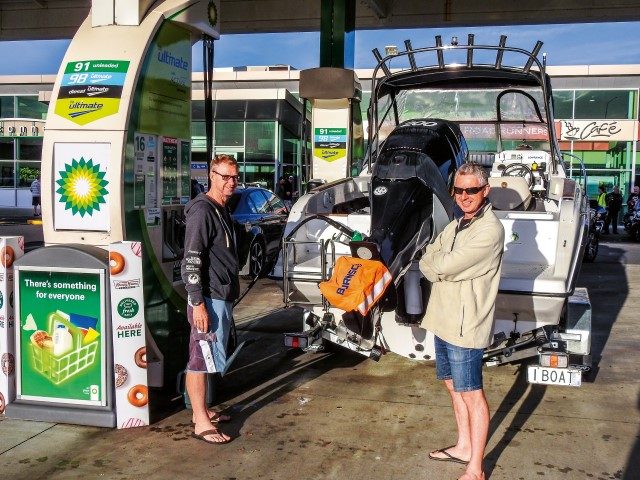 A quick squirt of one of these products into the air inlet of your engine before turning it over will provide those volatile elements that the engine needs in order to fire when cold, and with luck you’ll get her started.

It is recommended however that you run the engine very conservatively on the stale fuel, and as soon as there is sufficient volume in the tank you should top it up with fresh fuel. Also take note that aerosol ether is extremely flammable, so use it in a well-ventilated area where there is no open flame.

WHAT ABOUT ETHANOL?
A number of fuel blends now contain ethanol and much has been written about its supposed dangers for marine engines. Initially suppliers warned customers not to use E10 fuels (which contain 10% ethanol) in their boat engines, but most modern engine manufacturers now approve this fuel for general use.

But beware: ethanol mixes perfectly with water (any whisky-and-soda drinker knows this), and over time water always gets into a fuel tank. When this happens, a process called phase separation occurs, forming a layer of ethanol and water that separates out from the petrol.

This layer sinks to the bottom of the tank where it is picked up first by the fuel inlet and this mixture can cause major engine problems. A water-separating filter may not pick this up as it is lighter than pure water, and the only solution then is to drain the tank.

Ethanol-blend fuels may be fine if the boat is being used regularly but are probably best avoided over the winter when there could be long periods between boat usage. And these E10 blends should not be stored for more than a few weeks.

FUEL STORING TIPS
There is no simple way to prevent fuel going stale if your boat is only used intermittently, but the following guidelines may help:
• Add some fresh fuel when the boat has been stored for more than a week or two. This will provide the volatile components that help cold-starting and protect the engine from cold-start high-revving damage
• Always keep the tank at least half-full to reduce water vapour from being sucked in and condensing
• If you can, close the tank breather pipe when storing. But watch for pressure build up in the tank, which can cause plastic containers to burst
• Use a fuel that contains anti-oxidants, metal deactivators and corrosion inhibitors to protect metal surfaces Fuel that contains ethanol is not suited to being stored for long periods. Avoid them if you don’t use your boat regularly.