Because boaties are typically resourceful characters, it’s no surprise that many have tackled DIY gas installations. But they’re now being asked by marine brokers, insurance companies – and sometimes marina operators – to provide a ‘Gas Safety Certificate’ for their vessels. What’s that? Robin Trevallion, a certifying gas fitter with 40 years’ experience, explains.

Prior to 2010 any work carried out on a gas installation connected to a cylinder of 15kg or less was not considered as ‘gas fitting’ and therefore not governed by the then NZ Gas Safety & Measurement Act.
In reality this meant anyone could legally repair a BBQ, install a cooktop on a boat or caravan – or even in a domestic property. In 2010 the Act changed. Today, the only gas equipment that’s not considered to be ‘gas fitting’ are mobile appliances where the gas supply moves with the appliance – BBQs and portable patio heaters. Note that domestic portable heaters, often known as ‘cabinet heaters’, have now also been banned. 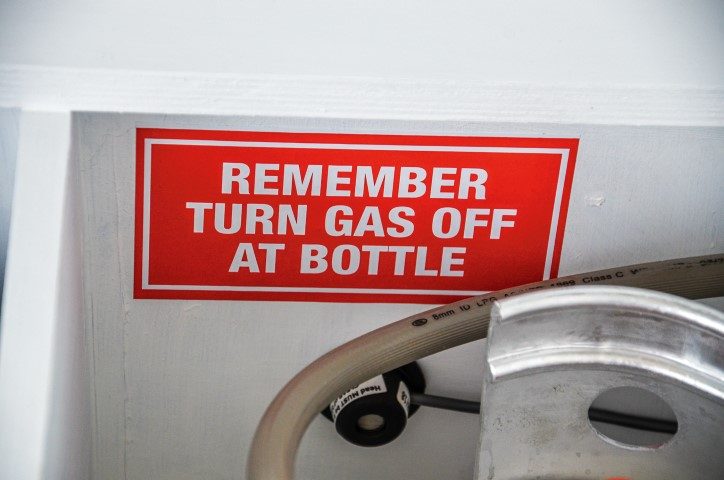 Since 2010 any gas installation or appliance that’s a permanent fixture of a vessel, caravan or building now comes under the NZ 2010 Gas Safety & Measurement Act and any work carried out on such installations has to be carried out by a licensed gas fitter.
It is also a legal requirement for any gas work carried out on a boat, because Energy Safe considers it to be high-risk gas work. It must have a gas safety certificate issued by a Certifying Gas Fitter and the details of the work must be lodged on the Energy Safe website (www.energysafety.govt.nz).
The certificate – valid for seven years from the date of issue – is a statement by the Certifying Gas Fitter that the installation has been carried out and commissioned according to AS/NZS 5601; 2013 gas codes parts 1 & 2, and any relevant appliance manufacturer’s instructions.
But the certificate is not a guarantee that something untoward will not happen to the installation over the seven years. So like any other component of the vessel, every gas installation should be regularly maintained.

How dangerous is gas on a boat?
All reportable gas accidents in New Zealand, where injury or death occurred, should be lodged with Energy Safe and these incidents are available for public viewing. In 2017 there were 12 reported accidents involving gas – none involved boats. In 2018 there were eight – again none involved boats.
Almost all these accidents involved either portable canister-type camping stoves, domestic cabinet heaters or faulty workmanship carried out by owners in caravans. They resulted in burns to the people concerned and damage to the property – no deaths occurred. So far in 2019 there have been no reported accidents involving gas.

So why does Energy Safe classify gas work on a boat as ‘High Risk’? The work itself is not high risk, unless you count getting from the jetty onto the boat with a bag full of tools. I’d argue that the boat installation is no more likely to fail, if installed correctly and properly maintained, than any other gas installation. It’s classed as ‘High Risk’ because if a gas fault occurred there is a greater chance of injury or damage due to the relatively confined space on board a boat.

What are the dangers?
While there have been no recorded deaths in New Zealand relating to an uncontrolled gas leak either on a boat, caravan or domestic home, a gas leak on a boat has a greater risk of causing an explosion because liquid propane gas is heavier than air and if it leaks will act the same as water and fill the boat from the bilge up.

If this happens you won’t smell the gas until it is nose height and by then you have a major problem on your hands. But deaths have been recorded due to Carbon Monoxide poisoning. Some relating to faulty gas equipment or its improper use (such as using a gas cooker as a means of heating in a confined space), others due to diesel or petrol-powered generators being used against the manufacturer’s advice, again in enclosed spaces.

Improving safety on board
Install a hard-wired gas detector with an audible alarm. Examine your gas installation and ask yourself: if gas leaked from a joint or appliance, where would it go? Remember it acts like water so consider sealing any gaps in the boat’s structure below, or adjacent to, the pipe or appliance. This would prevent the gas migrating from one area of the boat to another. If you can contain a leak you have a much better chance of smelling it before it becomes a major problem.
If you have a gas appliance that runs continually and un-monitored (such as a refrigerator) or has a relatively high gas consumption such as a continuous flow water heater, consider installing a carbon monoxide detector. The more permanent ventilation you have, the better.
If you see soot or black stains forming around a gas appliance, or excess condensation forming when you light a gas appliance, get it checked immediately. Of course, if you smell gas, turn it off immediately and seek advice.

Common issues
When a Certifying Gas Fitter inspects your vessel, he may come across some of the following issues. The cylinder should be less than 10 years old and in good order, with a manufacturer’s date stamped on the rim of the cylinder. Cylinders should always be stored and used upright – definitely not on their side – and secured to prevent movement from the boat’s motion. Ideally, secure them in a permanent, dedicated gas locker. 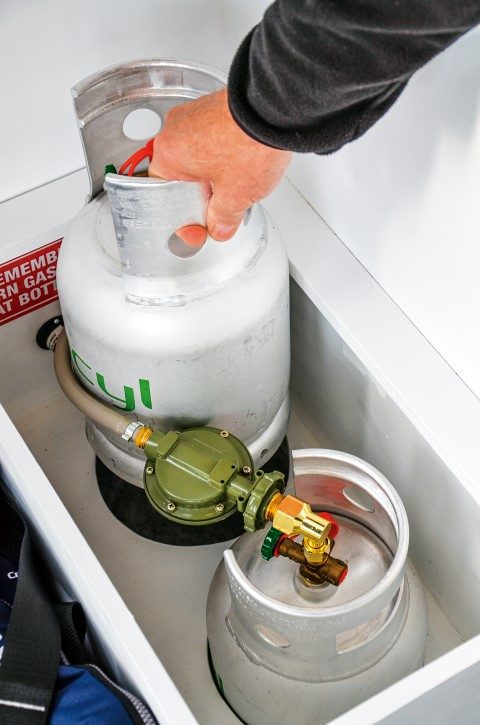 The locker should have a sealed door and a 19mm drain hole (minimum) at the bottom so any leaking gas will flow overboard either directly or indirectly through a deck drain. It should have a red triangular LPG warning label attached to the outside of the locker. If you have a fire on board the fire brigade or Coastguard won’t want to be searching through all the lockers to turn off the gas.
And a pressure test point should be in the initial pipework so a gas fitter can perform a ‘tightness test’ – ensuring there is no leak anywhere in the installation. Eliminate any gaps where leaking gas could pass from the gas locker to other areas of the vessel.
Gas hoses shouldn’t be fitted with jubilee clips – or worm clips as they are sometimes known. All hoses should be permanently crimped to the pipework. Again, the gas hose should be date stamped. Ideally they should not be more than five years old – although this is a recommendation rather than a legal requirement.
The hose must be in one continuous length and protected where it passes through locker walls or partitions. I recommend that if you’re upgrading your gas installation use copper pipe that’s encased in plastic. Note: if you have more than one appliance on board you have to use copper pipe.
Gas appliances must be installed and used in accordance with the manufacturer’s instructions and be approved for use in New Zealand and in a marine environment. This is a tricky area for the gas fitter when dealing with older installations as most owners rarely have the product’s original documentation.
Information regarding appliances can be difficult to track down, and appliance data plates can fade very quickly in a marine environment, making identification difficult. The Certifying Gas Fitter has to rely on his/her experience, judgement and knowledge of the relevant gas codes to decide if the appliance is installed correctly and is safe to use. 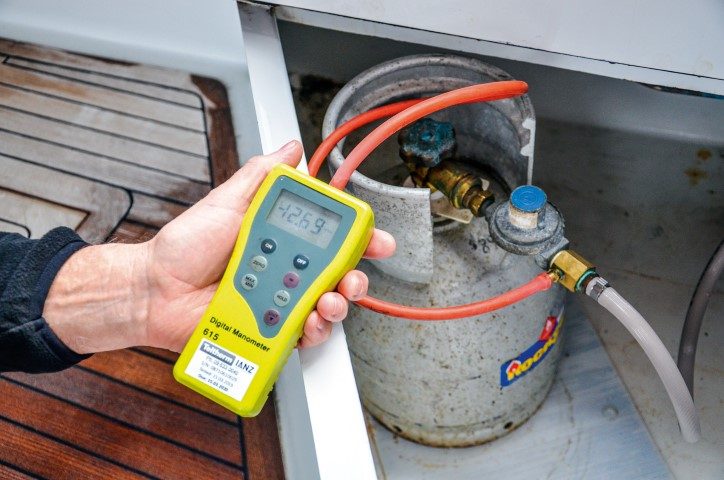 Gas has been used for lighting the streets of London since 1816, followed over time by cooking, refrigeration and heating applications around the world. Every year manufacturers produce better and safer appliances and safety legislation is getting tighter to prevent accidents.
If you have gas on board your vessel, treat it with respect, take steps to maintain the equipment just as you would with any other aspect of your boat – and it will serve you well.