The year is 1968 and my uncle and I watch the TV in the far north of Scotland – black and white images of a yacht surrounded by smaller boats making its way into harbour. The announcer is describing the arrival back in Britain of Francis Chichester after a record-breaking circumnavigation on his yacht Gipsy Moth IV – the first person to singlehandedly sail around the globe via Cape Horn.

It seemed unimaginable to me, as a small boy, what Chichester had done. Of course, Uncle Wullie had been around the globe several times as a merchant seaman, but the realisation that Chichester did it alone inspired me towards sailing from that moment on.

Chichester’s voyage had only one planned stop-over, a place called Sydney, somewhere I’d only vaguely heard of. While wrestling with the boat in Bass Strait he was annoyed to see a motorboat approaching his yawing yacht. On board was yachting journalist Lou d’Alpuget armed with whisky a hinged false panel. It swung open to give access to modern GPS and communications gear. 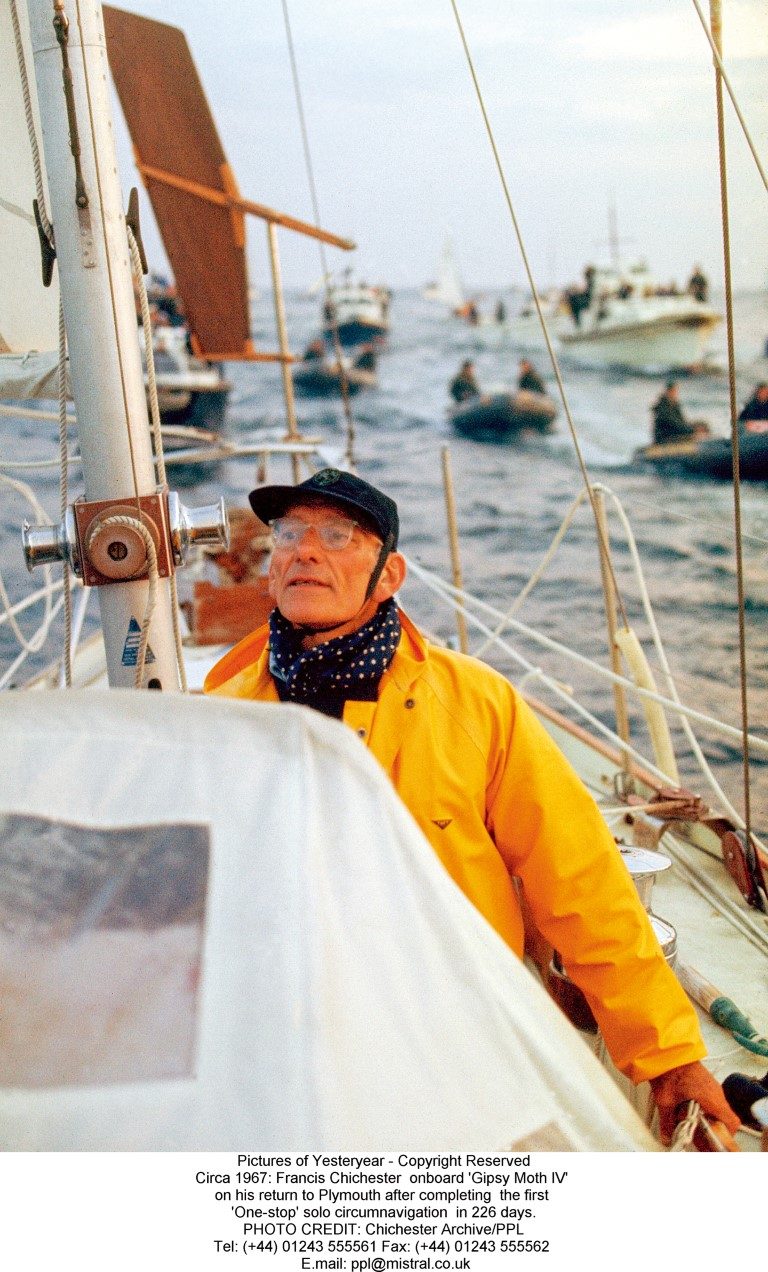 Opposite on starboard, the galley, with large stove, sink and saltwater pump and lots of sliding doors to hold victuals. Above, a forward-facing window which allowed Chichester to cook while keeping an eye ahead.

In the saloon, a large folding table and benches to seat six. I doubt Chichester spent much time lounging here given the rigours of solo sailing. Beside the table sat a robust paraffin heater – it provided comforting heat that helped sustain him rounding Cape Horn. All lockers had sturdy catches, crucial during her capsize back in 1967.

I could feel Chichester’s presence down here amid the scent of wood and oil because so much was original. When I grabbed some the handrails, I imagined him doing the same as she yawed and rolled her way across the empty wastes of the Southern Ocean – with the Blondie Hasler-inspired self-steering toiling to keep her on course.

Sailing this regal lady was not for the faint-hearted but our incentive to do well was strong, because we had to ‘race’ around the islands to arrive in time for the Whitehaven Beach Party, an event where the receding tide would expose wildlife of the homo sapiens variety, especially around the legendary XXXX beer tent.

Taking the yacht there under the formidable skipper Simon (“Get that sail hoisted, you spineless blaggards!!”) was like waking up in an episode of Hornblower. The crew laboured, Simon swore and the jokes came thick and fast as jovial irreverence, caused by a clash of Australian unfussiness, British naval tradition and Hahn beer.

Like the WWII Normandy landings, the Whitehaven beach assault was messy, with sun-induced burnt flesh everywhere and bikini-clad ladies cavorting wildly, some clenched in combat with those of the opposite sex. The threatened media soccer match against a rival magazine was settled over a XXXX instead.

Before long the retreat signal was given and we jumped aboard Gipsy Moth IV to manually wrestle the big anchor up (a ‘windlass’ sitting on the starboard side, midships, turned out to be a winch for controlling the twin running sails. Of course!).

Bowling home and powered up she twisted and slid down waves like a typical IOR snake, while a race of contrasts took place with the 98-foot Skandia supermaxi. As they came alongside skipper Grant Wharington got all hands on deck to give us a salute and three cheers. Stirring stuff – and overhead the RAAF Roulettes aerobatic team buzzed past in tight formation with a faint tipping of their wings. Not a bad day at Hammo, overall.

In 1965 Chichester commissioned Gosport-based shipyard Camper and Nicholsons to build the boat, designed by John Illingworth and Angus Primrose. Launched in March 1966, Gipsy Moth IV was 53ft (16m) overall with long overhangs giving a modest waterline length of 38ft 6 in (11.73 m). The hull was built in cold-moulded Honduras mahogany.

The scheduled displacement (to meet Chichester’s maximum weight requirements) was 10.4 tons, but after trials a ton of ballast was added to cope with her insufficient righting moment. Ketch-rigged, she has a sail area of 79.3m2, extendible with a spinnaker to over 140m2 Illingworth designed her to have the maximum amount of sail for the minimum amount of rigging. He employed tillerbased self-steering using ideas from Blondie Hasler’s famous Folkboat that allowed steerage from the skipper’s bunk, essential for lengthy solo voyages.

Gipsy Moth IV set out from Plymouth on 27 August, 1966 with 64-year-old Chichester at the helm. The voyage was eventful, and Chichester recalled one particular moment when it nearly ended. Part of the frame holding the wind vane self-steering failed, 2,300 miles from Sydney. Not wanting to put in at Fremantle, he spent three days balancing sails and experimenting with shock-cord lines on the tiller, eventually getting the boat to hold a course and cover 160 miles a day.

When an exhausted Chichester entered Sydney Harbour for a stopover 107 days later, he enlisted the help of America’s Cup designer Warwick Hood. He added a piece to the boat’s keel, extending its base to hang below the keel-hung rudder. This was intended to provide Gipsy Moth IV with better directional stability, but the modification wasn’t a success.

This gave the Englishman plenty to consider given that they were only halfway round the world and the toughest test was yet to come – Cape Horn. As he recalled afterwards: “The boat was too big for me. She is cantankerous and difficult and needs a crew of three – a man to navigate, an elephant to move the tiller and a 3’6” chimpanzee with arms 8’ long to get about below and work some of the gear,” he said. On the home leg near Cape Horn the yacht rolled in a 140° capsize, but fortunately self-righted. 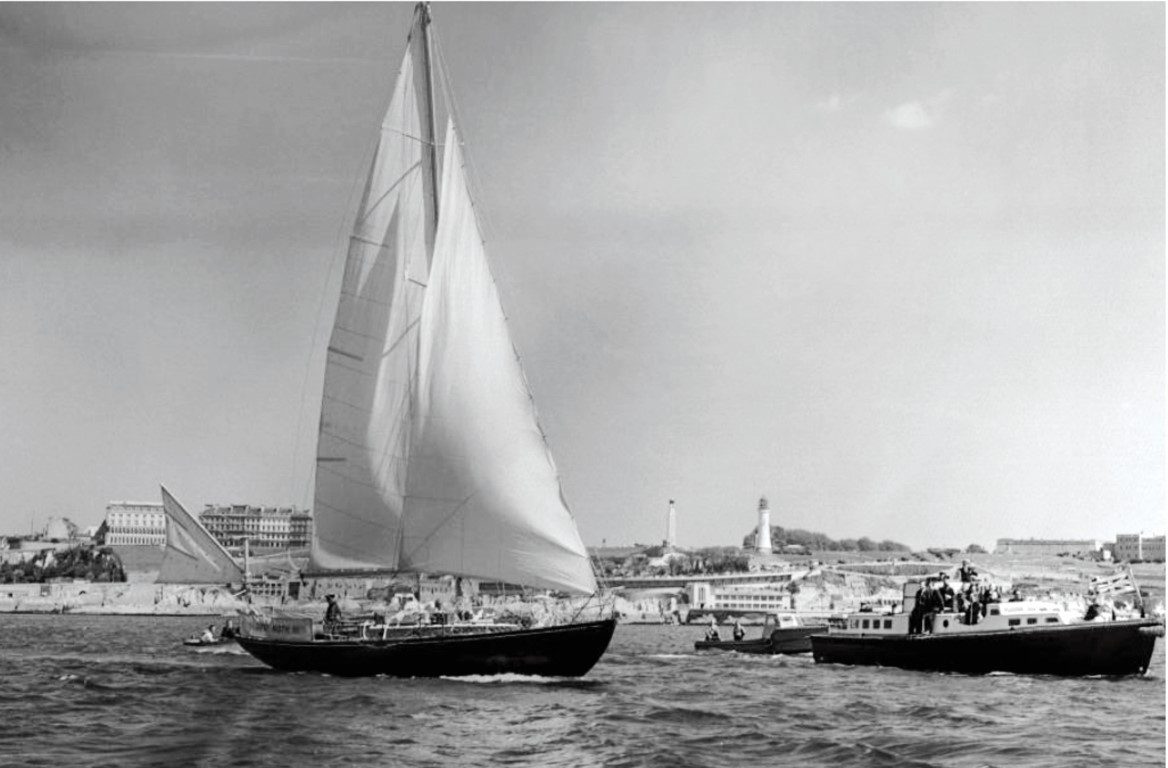 In his book, The Circumnavigators, Don Holm describes Gipsy Moth IV as “perhaps one of the worst racing yachts ever built.” The boat was too big and too demanding for the 64-year-old skipper. At the end of the arduous circumnavigation, asked why he did it, Chichester replied: “Because it intensifies life.”

Among the records that Chichester achieved during that ninemonth voyage was beating the average time (230 days) taken by a fully-crewed Clipper ship: Chichester did it in 226 days.

On his return in May 1967, thousands lined the shores of Plymouth Hoe to welcome him. Chichester became an national hero, including to small boys like your writer who had nautical aspirations. He was invited to Buckingham Palace where the Queen knighted him, using the same sword that gave that honour to adventurer Sir Francis Drake; the first Englishman to complete a circumnavigation with his crew.

Chichester then unceremoniously dumped the yacht to have his final vessel built, Gipsy Moth V, stating that version IV had no sentimental value for him at all. The yacht lay rotting while Chichester again sailed transatlantic voyages in pursuit of records.

But by then his body was failing and he was airlifted from his last voyage, with son Chiles going aboard to bring the new a yacht home. Shortly afterwards he lost his long battle with cancer and died in 1972. He had two children with wife Sheila, and eldest son Chiles went on to sail solo in his illustrious father’s wake.

A campaign launched in 2003 by journalist Paul Gelder led to the Gipsy Moth IV’s restoration. The affable editor of Yachting Monthly, Paul Gelder and I have been on some memorable assignments together which included being presented to Princess Anne in 2006 in Sydney. “But you’re not Australian!” she accusingly laughed at me. As patron of Scottish Rugby and various other northern tribes she knew me for what I was.

As for Gelder, I greatly valued his camaraderie and his wit. A newspaperman turned magazine writer, he’d done the media hard-yards before helming Yachting Monthly. Very sadly, Paul died in 2019 from cancer, aged 71, but he left a fantastic legacy in the shape of the restored Gipsy Moth IV.

Early in the campaign Gelder met the head of the UKSA, entrepreneur and sailor David Green, who got the organisation to take over the boat restoration. She was taken by road to her original builder Camper & Nicholson, in Gosport, with the company doing the £300,000 project at cost price. A lot of the money came from the general public.

The B&G navigation equipment was replaced with new electronics but the original devices were retained on a covering panel to maintain the 1966 feel. Gelder recounted the restoration story in his book, Gipsy Moth IV: A Legend Sails Again.

The restored yacht was launched in June 2005 – the date coincided with the 40th anniversary of Chichester’s epic voyage and by September she departed for a 21-month educational round-the-world voyage. The first part was with the Blue Water Round the World Rally, via the trade wind route and the Panama Canal (not via the Capes).

WRECKED ON THE DANGEROUS ARCHIPELAGO

After Panama and heading across the Pacific in 2006 she ran aground on a low-lying atoll in the Tuamotus – not for nothing are they known as the ‘Dangerous Archipelago’. On board was a crew of youths from a charity organisation, led by 32-year-old skipper Antonia Nicholson and 24-year-old first mate Chris Bruce. The yacht had wandered off course in the worst place possible.

The yacht was swept up by a large wave and thrown across the reef at Rangiroa. After a Mayday and subsequent quick action by the UKSA charity, she was successfully salvaged by the Dutch company Smit.

Among the rescuers was the man who’d first come to the rescue of rotting yacht years earlier – Paul Gelder.

“My first glimpse of Gipsy Moth IV, a mile away through a gap in the mangroves and palm trees, was heartbreaking. She lay on her side on a wild, barren stretch of reef, her red ensign still fluttering from the mizzen mast.” 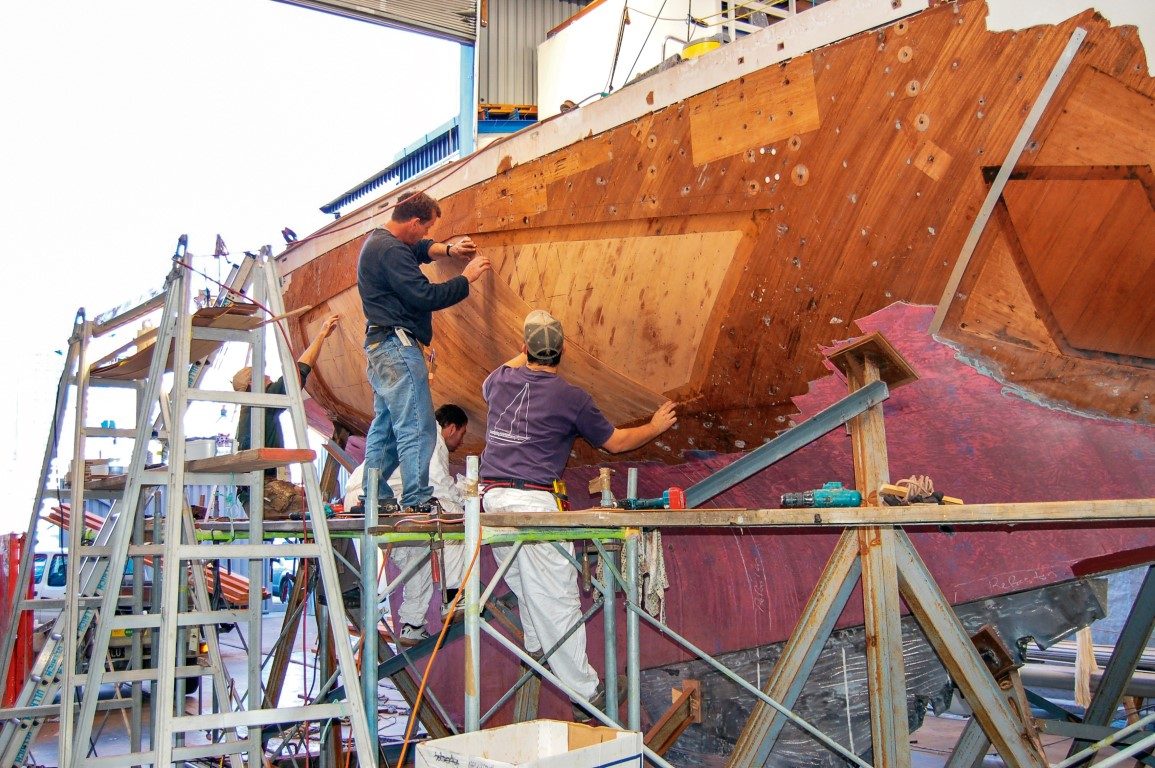 After fitting plywood patches on the hull and towing her across the reef to deep water, the yacht was saved. There followed a second extensive restoration in Auckland by the NZ America’s Cup Team – led by Grant Dalton – who donated premises and help in the Viaduct Harbour, allowing the yacht to be relaunched in June 2006.

That was just in time to reach Hamilton Island Race Week and meet with this writer, who was careful to avoid all reefs while at her helm. Soon after she departed west to complete her circumnavigation via the Suez Canal. After being accompanied into Plymouth by a flotilla, Gipsy Moth IV docked at West Hoe Pier on 28 May 2007, just as she’d done exactly 40 years earlier, to complete her second journey round the world.

Owners UKSA eventually sold the yacht in 2010 for $250,000 after finding her unsuitable for training and the maintenance costs too high. After a campaign to keep the yacht in British waters, she was bought by entrepreneurs Eileen Skinner and business partner Rob Thompson who then handed her to a new charity, The Gipsy Moth Trust.

The yacht’s costs are funded by paying passengers and crew, and by donations to the Trust. She often returns to Chichester’s locale, Bucklers Hard on the snaking Beaulieu River, a legendary pier on the Solent that many sailors cherish, including this writer many decades ago doing his junior skipper’s ticket with a head full of Gipsy Moth dreams.

THE RIME & THE ALBATROSS