Invasive species, both terrestrial and marine, are a fact of life in this interconnected modern world, writes John Eichelsheim.

The New Zealand archipelago is among the most isolated places on earth, which is why these islands are home to so many unique animals and plants. But it is nevertheless inextricably linked to the rest of the planet via travel and trade.

In fact, New Zealand is a hotbed for deliberate and accidental animal and plant introductions.

New Zealand’s Polynesian and European settlers each brought with them the animals and plants they were familiar with and later introductions were made to support farming, horticulture and forestry. Such deliberate introductions continue, along with accidental introductions when organisms slip through New Zealand’s biosecurity net. 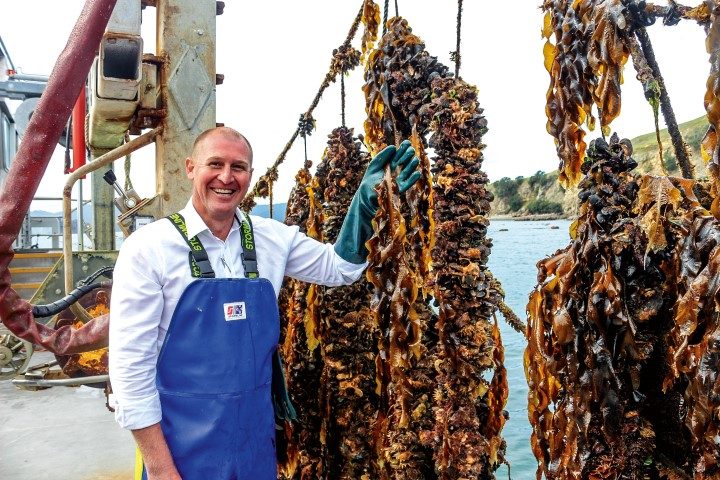 Some animals, like trout and salmon, numerous species of gamebirds, rabbits, chamois, tahr and deer were released into the wild to support recreational hunting and fishing, with sometimes devastating effects on native ecosystems. Other introductions, like dozens of species of insects (think wasps) and other invertebrates, were either misguided or accidental.

Many familiar and exotic plants were imported as ornamentals and a huge variety of animals entered and continue to enter New Zealand for the pet trade. Inevitably some introduced species establish feral populations and become pests, out-competing, out-breeding and preying upon native animals and plants. Ironically, the newcomers are often better adapted to New Zealand’s much modified post-settlement environment than indigenous species.

Marine invasions are less obvious than terrestrial ones and for the most part less intentional, though there are exceptions. Pacific chinook salmon, for instance, were successfully introduced in the early 20th century (earlier attempts to establish marine stocks of Atlantic salmon failed, though a few land-locked populations survive), the species becoming a part of New Zealand’s coastal biosphere wherever conditions are suitable. 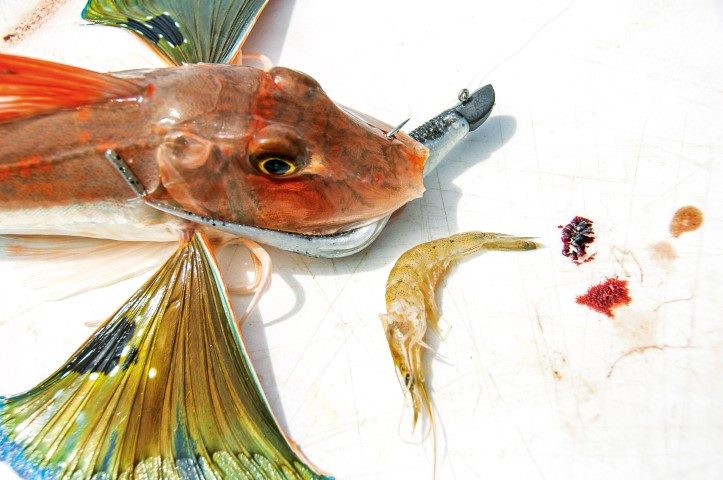 Some invasions are natural: species swimming into our waters or being carried here by ocean currents. As conditions around New Zealand become more hospitable to sub-tropical animals and plants with global warming, such self-introductions will become more common. While these species are technically invaders, they are not classified as invasive because they are reaching our waters without human help, but their establishment usually comes at the expense of native species.

Marine invaders can compete with or prey on indigenous species, modify natural habitats, affect marine industries and alter ecosystem processes. I was surprised to learn that in 2015, 315 non-indigenous marine species were identified in New Zealand waters, 186 of them having become established. A 1997 study reported 66 from the Waitemata Harbour alone.

Perhaps more disturbing, new species are arriving at an accelerating rate. The cumulative total of species identified rose by 10% between 2009 and 2015, with 33 new species reported, 15 of them maintaining self-sustaining populations. 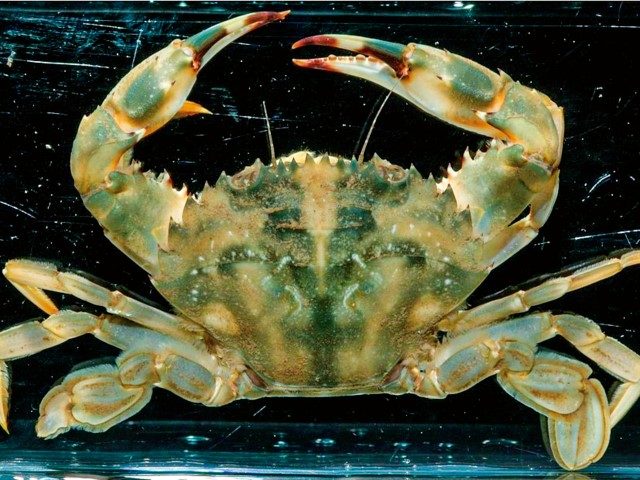 Most marine invaders arrive by piggybacking on human activities, hitching a ride on the hulls of ships or in ballast water, often as juveniles or larvae. While many have little impact on the local environment or fail to survive, some quickly establish themselves and a few become serious pests.

Some marine invaders are now so common, we don’t consider them exotic. Pacific oysters (Crassostrea gigas) for instance, the mainstay of the rock oyster industry in New Zealand, is an invasive species. First noted in the early 1970s, Pacific oysters may well have arrived with the Auckland Harbour Bridge’s ‘Nippon Clips-ons,’ which were towed here from Japan in 1968.

In both countries, their spread was accelerated by the oyster farming industry, which was quick to adopt Pacific oysters because they grew bigger and faster than the native species. In New Zealand native rock oysters are becoming rare in large parts of their former range.

More recent invertebrate arrivals include the Japanese mantis shrimp, which appears to be well established in the Kaipara and Hokianga Harbours (and anecdotally the Manukau Harbour and east coast as well) and the Australian greasyback or green shell prawn, first reported from the Waitemata Harbour in 2009 and now well established there and further north. 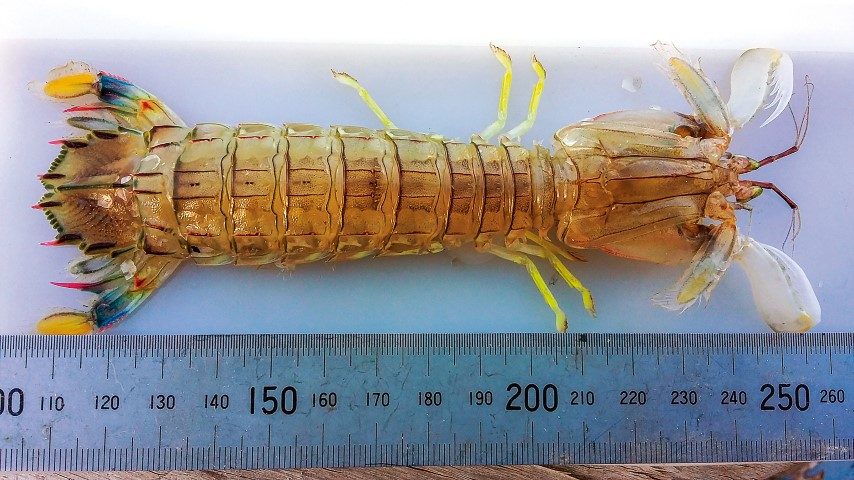 Other species include the Asian paddle crab, Asian date mussel, two species of tunicate worm, and the Mediterranean fanworm. All of these have potentially adverse effects on native flora and fauna or marine infrastructure and most have expanded their range since 2009.

High-risk species not yet found in New Zealand, but some of which have already invaded Australia, include the fragile clam, European shore crab, Chinese mitten crab and Northern Pacific seastar.

Invasive animals are one thing, but invasive marine plants are an equally serious threat. One of the most widespread is undaria (Undaria pinnafatida, Japanese kelp or wakame), a seaweed native to Japan and used in miso soup is now growing from one end of New Zealand to the other.

Undaria forms dense forests, completely smothering native vegetation and blocking out the light. It has the potential to displace native seaweeds and invertebrates, clog water pipes and foul aquaculture equipment, but it is also edible, making it the focus of several food-related Kiwi businesses. 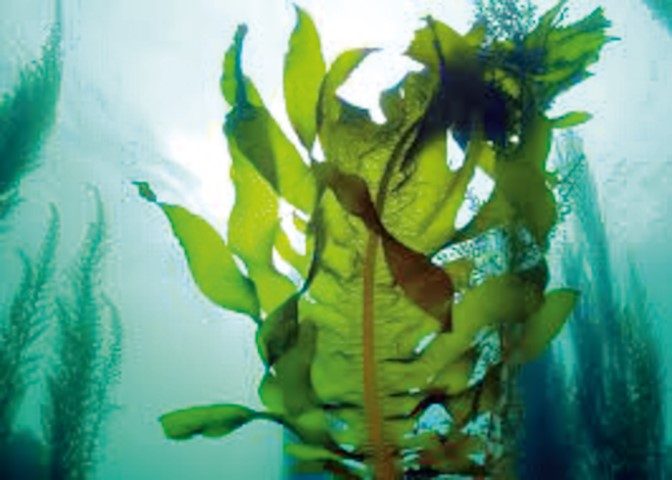 Preventing invasive species arriving in New Zealand is always going to be difficult given the growth in international maritime trade, so it’s likely the rate of introductions will continue to increase. Caught early enough, the spread of invasive species can sometimes be controlled and on rare occasions invaders can even be eliminated, but for those species already established the goal is to limit their spread.

As boaties, we can do our part to prevent invasive marine organisms spreading by regularly cleaning boat hulls – ideally fouling growth should be kept to no more than a light slime layer – and applying antifouling paint thoroughly and often. 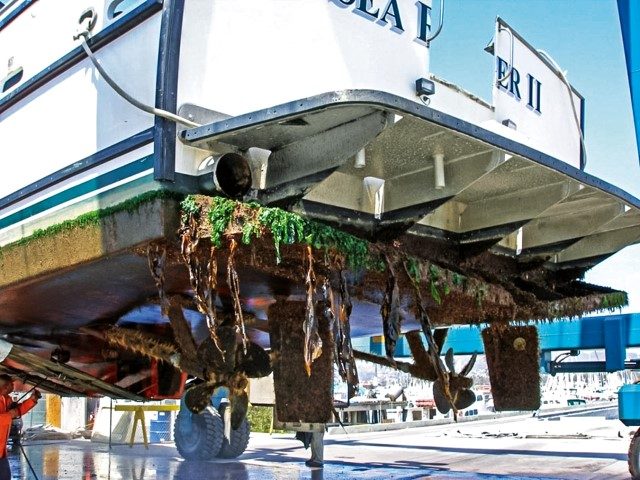 Before using any marine equipment (e.g. ropes, lines and pots) in a new area, clean and dry it thoroughly and remember to inspect areas on your boat that retain water for signs of marine life. Check also for aquatic weeds tangled around anchors, trailers and other equipment.

Since invasive marine organisms are spread by vessels travelling from one port to another, it is important skippers ensure their hull is clean and free of fouling before travelling to a new area. For some regions, Northland for example, the regulations around marine biosecurity are strict.

Vessels travelling to Northland waters or moving between areas in the region may have no more than ‘light fouling’ totalling less than 5% of the hull. These rules are enforced.

Boat owners travelling to and within Northland waters are encouraged to fill out a voluntary anti-foul declaration form. Within Northland, boat owners are required to provide photographic proof, emailed to marinebiosecurity@nrc.govt.nz to prove their boat’s hull is clean before leaving an area.

Want seaweed with that?