While floating attenuators are not new in New Zealand, says Tony Mair (the marina’s project director), the Kennedy Point development take things to a new level. 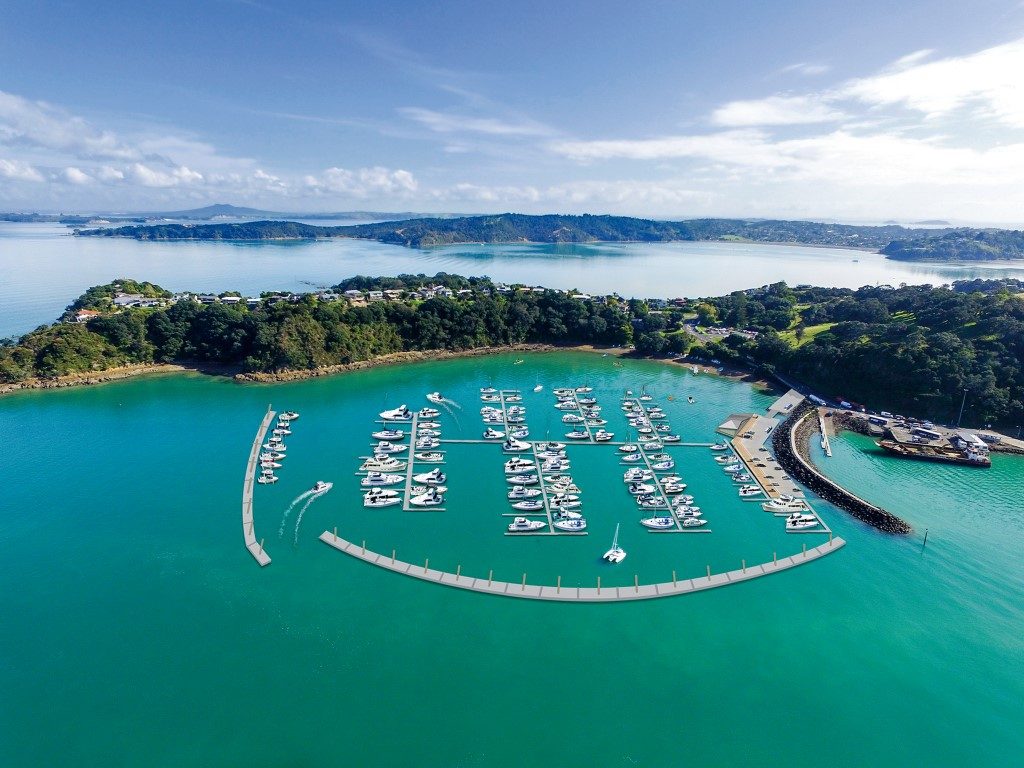 “Due to the existing deep water in the bay and a relatively soft seabed, a rock breakwater was not feasible. Instead, we decided to incorporate the floating attenuator technology.” The size and scale of the components is many times larger than anything New Zealand has seen before.

Working alongside SF Marina AB, consultants from the USA and Spain and local experts from Beca, the team ensured the size and type of pontoons would be suitable for the sea state at

The attenuator design requires 23 floating pontoons – each weighing in at over 200 tonnes and 20m long. The floating structure avoids the need for any dredging, reclamation or seawalls, and will be installed with minimal disruption to the shoreline and seabed.

“Initially, we intended to ship all the Swedish components but when Whangarei’s Heron Construction Ltd recognised the huge potential in this part of the world it decided to negotiate a development agreement with SF Marina. The company is now the licensed manufacturer for Australasia and the South Pacific.”

Heron Construction has established a large factory at the port in Whangarei and will soon cast the first pontoon. The technology will also be used for the skirted T-Heads and the pontoons for the floating carpark, office and café. All of the pontoons are larger than any previously manufactured in New Zealand.

They will be towed down the coast to Waiheke’s Kennedy Point in pairs. The journey’s expected to take 8-9 hours and minimise any disruption to the local Waiheke community. Once on-site, the pontoons will be joined by a proprietary connector system, after which the large steel piles with a plastic sleeve coating will be installed. The floating structures for the marina berths are being manufactured in Auckland by Total Marine Ltd and these too will be barged to site for installation. Total construction time is estimated to be around 24 months.

Says Tom Warren, CEO, Heron Marinas: “We’re really excited to be on-board with this project. As SF Marina’s licensed manufacturer, we’ve been tasked with constructing a world-class floating marina and we believe this will set a new standard for marina construction in New Zealand.” Following the installation of the outer attenuators, the car park and office pontoons will be installed.

The design and construction of the marina will deliver a ‘shot in the arm’ for other Kiwi businesses too, with an expected 100 jobs being created during construction, and additional new local employment opportunities on Waiheke Island once the marina is open.

Located at the entrance to Putiki Bay at Kennedy Point on Auckland’s Waiheke Island, the marina will be New Zealand’s first island destination marina. With construction due to start in early 2021, the facility will be a world-class, fully serviced, floating marina, offering 180 permanent berths as well as day-berthage for visiting boaties.

Berth holders will have access to toilets, shower and laundry facilities, as well as a café and chandlery. Secure car parking will also be available for up to 72 vehicles on New Zealand’s first floating pontoon carpark.