Every year many of the country’s traditional boat sailors get together to cross tacks in the Bay of Islands. Story by Lindsay Wright.

For many foreign cruising sailors, their first taste of Kiwi hospitality is a homely little yacht club perched on rows of pilings over the tidal waters of Matauwhi Bay near Russell in the inner Bay of Islands.

“We call them swallows,” says Russell Boating Club commodore Barry Newlands. “Some of them sail back year after year to get away from cyclone season in the islands.” The club presently has over 360 members from all over New Zealand and the world.

Other returnees to the hospitable little clubhouse are the scores of traditional boat sailors who line up every January to compete in the annual Tall Ships Race. This year was the 46th edition.

Explains Newlands: “Joe Cotton, our former commodore (now deceased), was instrumental in setting it up, with Vin Hill, who’s in his 90s and lives just up the road – aided by a lot of community input.

“The clubhouse used to be a fish factory and was in a bad state. When the club got up and running, they realised they’d need some way of fund raising to pay the Yachting New Zealand fees – and so the tall ships race was born. It takes a village to run a regatta like this – that’s the beauty of Russell. Everybody pitches in.”

Any extra money raised by the event is donated back to the community. Last year’s recipients were teachers from the Russell school who lost personal teaching aids when the school was gutted by fire. 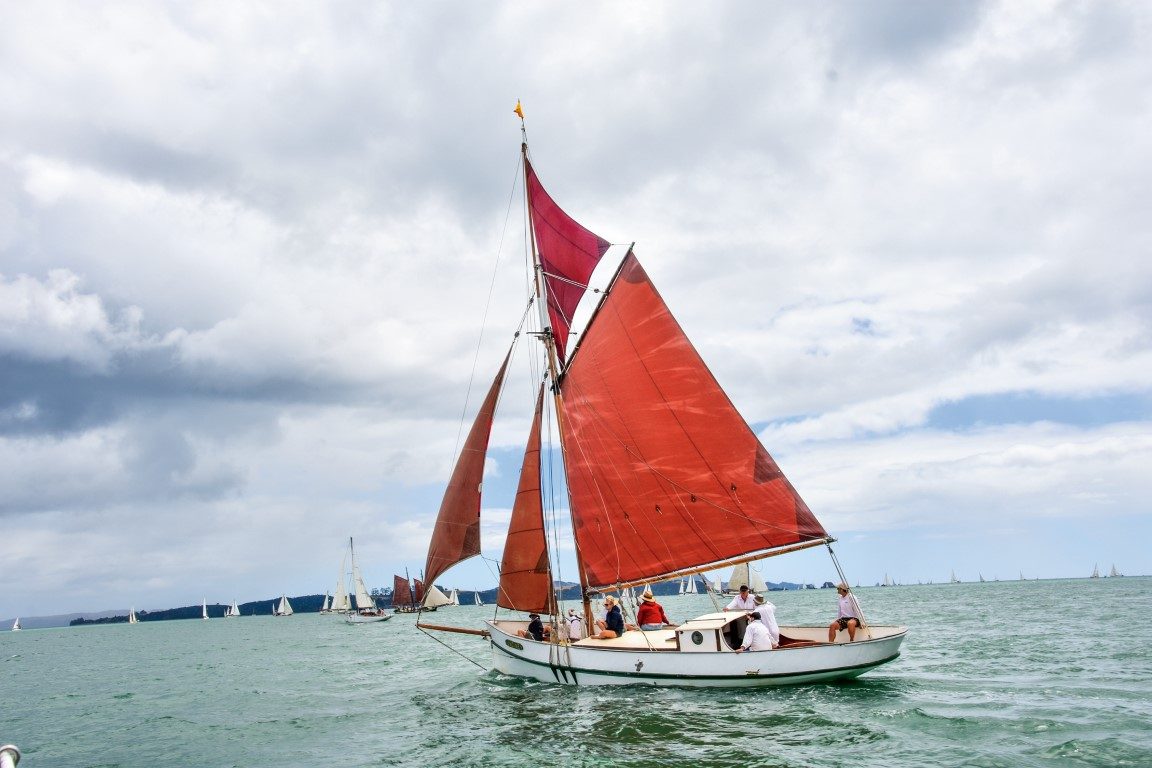 The tall ships’ division is open to vessels with two masts or more and measuring over 30 feet on deck, and for this year’s event over 70 craft, competing in three divisions, lined up for the start off Russell. Wind was in short supply at the finish and many boats, including R. Tucker Thompson, the only square-rigger, struggled to finish.

Out on the water, the racing spawns a whole year of sailing stories. Big wooden boats with gaff rigs and sky-scraping topsails, thunder around the course against the likes of Jim Cottier’s lovely little gaff yawl, Shanty.

Afterwards the sailors – greybeards and the new – gather behind the clubhouse for prizegiving, hangi food, music and dancing.

“This is the first year we’ve done the handicapping by computer,” says Newlands. “One member, Christine Hall, worked it out long-hand for about 40 years, but last year her view of the finish line was obscured at the crucial time and we didn’t get the results until the following day. That caused a bit of controversy, so we got a whole new on-water team this year. Christine did an amazing job – but we had to modernise.”

Four extended families prepare the hangi and have done so for more than 20 years. “We’ve got the grandkids coming through now – learning from the elders,” says Newlands. This year they produced 825 hangi meals before everything sold out, but in previous years more than 1,000 meals have been sold on the evening.

Some people called it the largest hangi in the southern hemisphere – but given the rarity of hangi in the northern end of the planet – it may be the largest in the world. “The people doing it are from the Russell Bowling Club,” adds Newlands, “so it’s the bowlers helping out the sailors.”

BOB MILLEN’S SCHOONER, South Seas, started out as a picture in a book but now she’s windborne reality.

“I’ve always wanted a schooner,” Millen explains, “and one day I was flicking through a book of schooner photos – as you do – and there she was.” The photo showed a Peterson Coaster design – drawn by the legendary Murray Peterson – as a yacht based on the lines of coastal trading schooners from the northeastern US. 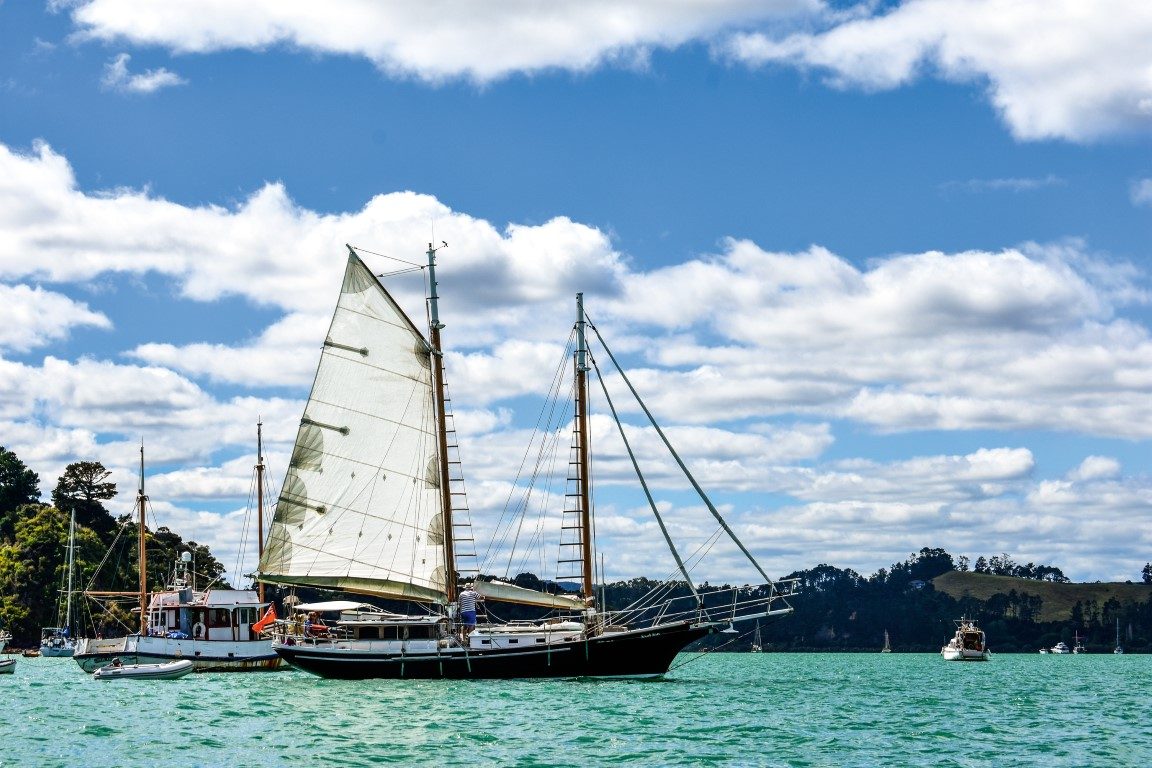 Millen had been stockpiling boatbuilding wood and the schooner was soon taking shape in a shed at his lifestyle block near New Plymouth. “People thought I was mad – starting a project like that in my 70s.”

But he did know boats – thanks to know-how gleaned during a 1982-86 circumnavigation in his 12m ferro cement ketch, Te Rehuata. He also competed in a twohanded trans-Tasman race with his son Ralph in an 11m Cheoy Lee named Moonrise.

“My first boat was a P Class I built and sailed at Paremata when I was about 11,” he adds. But things have moved on a bit since then.

Measuring 12m on deck and 16m overall the schooner’s construction comprises two diagonal layers of meranti plywood topped with a longitudinal strake of macrocarpa, epoxy-glued and fibreglassed over. Total thickness is 30mm. 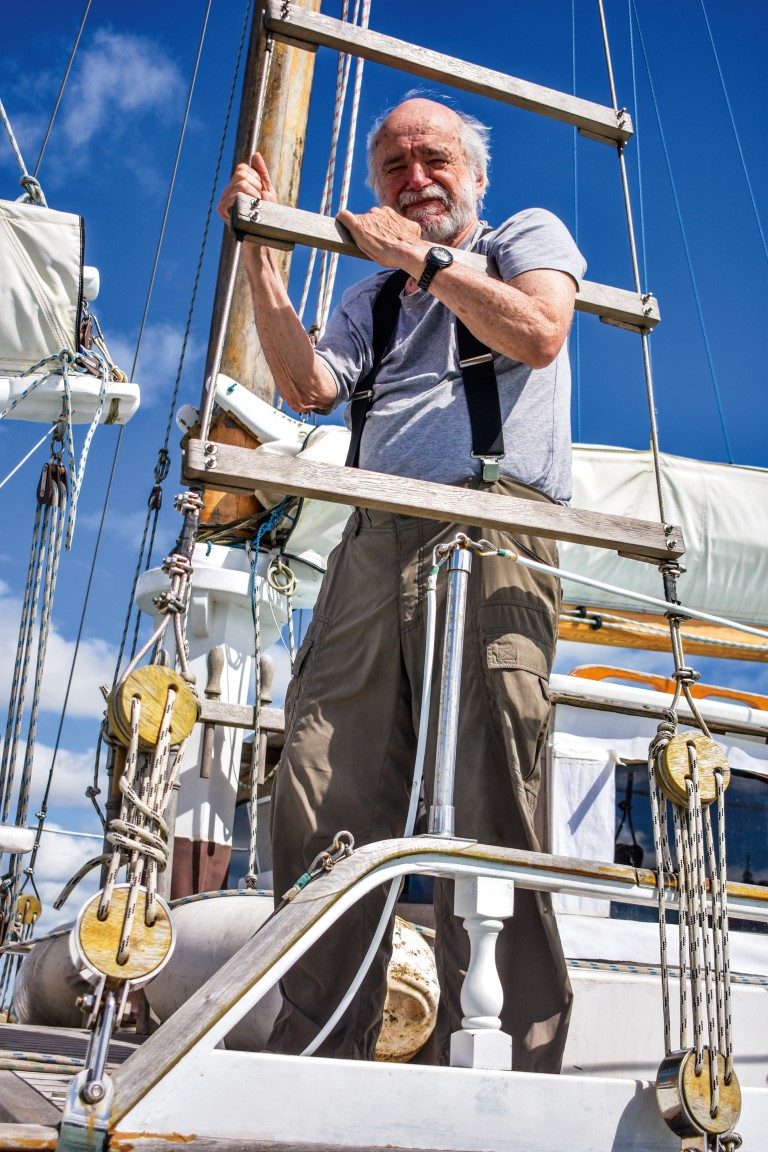 Local craftspeople in Taranaki helped to build some of the varnished tongue in groove interior joinery and wooden feature touches. The sailing instruments, control for the Vetus bow thruster and autopilot, are sheltered by a stylish kauri cabinet forward of the steering wheel. A 38hp Nanni diesel and gearbox (driving through a Gori prop) delivers seven knots at 1,500rpm.

After six years abuilding, the 11-tonne boat was craned out of the shed and trucked to Port Taranaki for her launching in 2016.

With her varnished masts and deckhouse, South Seas is distinguished by her workboat origins and demeanour. People say ‘That’s not really an old boat – it’s only four years old’ but the design dates back to the 1930s.

Like most of the people jostling for the start line off Russell, we had just enough wind to give the topsail a bit of belly. And when the horn sounded we sheeted the sails in and began our stately run – well more of a stroll, for the line.

Sailing a wooden schooner is ultimately relaxing. True to her workaday origins, South Seas has two sheet winches (“never use ‘em”). The peak and throat halyards that support the gaff are all sweated up by hand and the headsail and staysail sheets are also heaved in by hand on every tack, using what old time square-rigger men called ‘Swedish steam’ from the time when most of the world’s commercial sailing ships were owned and crewed by Swedes. 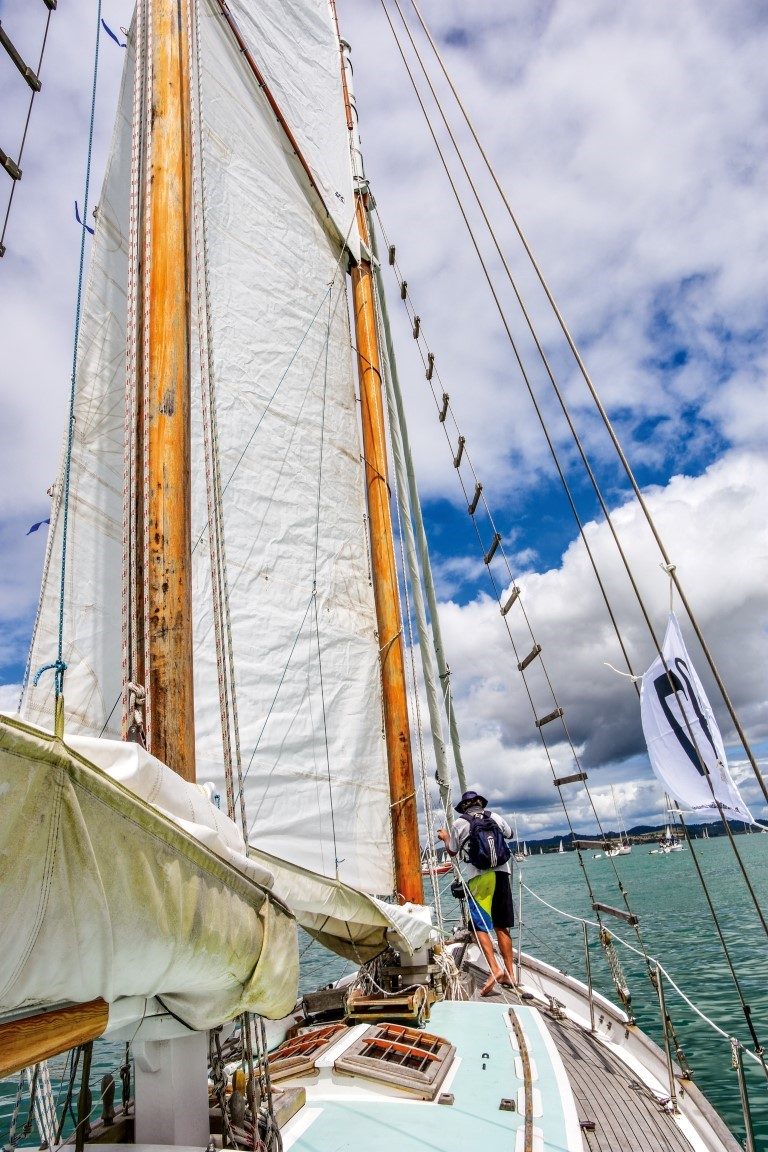 With the committee boat well astern, we settle down for the beat across the bay. Our scratch boats seem to be a blue ketch Dona Catharina and Saskia (a Bruce Roberts Spray replica), sporting a gaff yawl rig. Zebedee, a junk-rigged Wylo, was challenged by the long, light windward leg and soon sagged off to leeward.

R. Tucker Thompson stormed by with her squaresails set and drawing, her decks thronged with charter guests. She had to be the boat to watch – after all she sails the bay every day – the skipper must know where the wind and tide are best.

Meanwhile South Seas gently nods her way to windward. Tactics and sail trim are decided by the whole team and cold beers surface from belowdecks. With sheets eased, the schooner makes good mileage in the 10 knots or so of wind.

She sails best at about 60-75° off the wind and we overlay the marks outrageously – short tacking to round a buoy isn’t her forte. The windward mark slides by and we have a good lead on the competition which we keep after rounding the bottom mark. 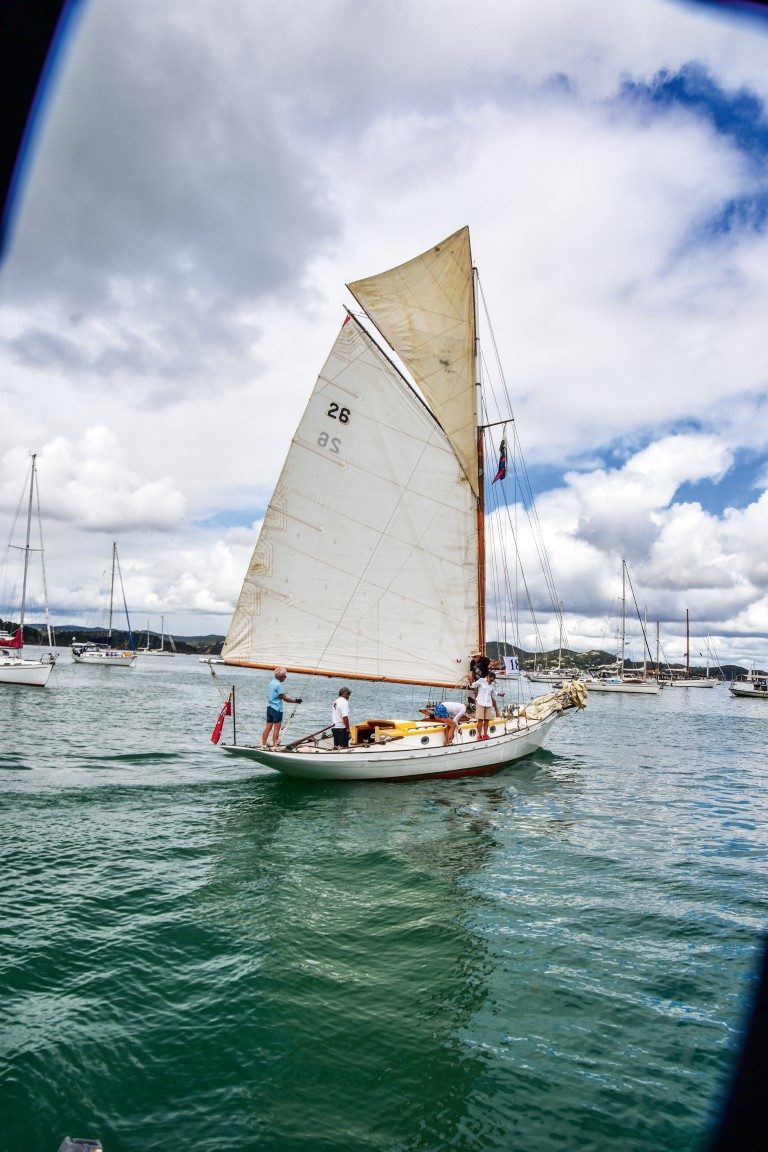 By then, sandwiches and scones have sopped up some of the alcohol intake and we slide by Tapeka Point on a dying breeze and waft down the harbour.

The tide is in full ebb and a pessimist among us points out that we’re actually going backwards. Personally I’d swear that the committee boat and finish buoy are creeping closer – a delusion that persists until the race time elapses at 6pm and they retrieve the buoy and disappear.

The sails are dropped, stowed and covered and, as we motor back to the anchorage the figures are run. It’s an 18nm course, we probably sailed 24 miles and it took six hours – an average of four knots.

“And we only dropped off the foils once,” a shipmate said. Not bad for a bunch of bozos on a 30-year-old design with her heavy-duty rig.

As part of its hospitality ethos, the club provides food and regular entertainment after cup races on Wednesdays, Fridays and Sundays and learn-to-sail lessons for young locals and holidaying kids. 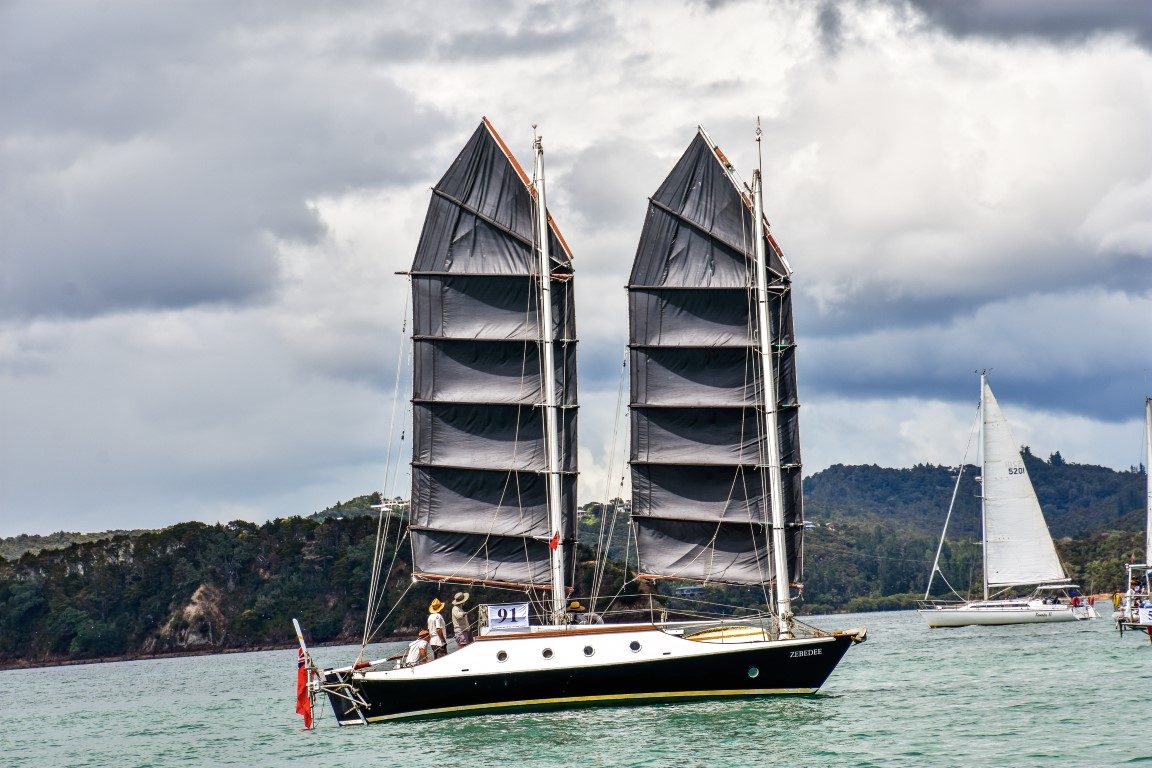 “We’re often called on to do sailing camps for adults,” says Newlands. “The sport is losing people in their 30s and 40s who are too busy raising families and working to keep up with mortgage payments.”

Visiting cruisers cram the verandah for evening food and entertainment. Conversation in a variety of languages and accents babbles out across the bay. Business as usual at the Russell Boating Club.

“We’re planning to raise the clubhouse by about a metre to futureproof it for sea level rise,” says Newlands, “extend the verandah and put another storey on the back for better shower, toilet and laundry facilities – and extra storage.”

The photos mounted on the wall, he points out, depict the club’s past, but the people on the water are its future.