Mercury’s recently-launched 7.6‑litre V12 600hp Verado® – the world’s first V12 outboard and the industry’s most powerful – is the organisation’s response to emerging trends in the boating sector.

“With boats continuing to grow bigger and growing performance expectations, boaters have been asking for more capable high‑horsepower solution to meet their needs,” says Mercury Marine president Chris Drees. “The V12 Verado delivers boaters the freedom, luxury and power to pursue their passions on the water.”

The V12 comes with a range of unique/world-first features. They include it’s naturally-aspirated, quad‑cam powerhead with serious torque to get heavy boats out of the hole and on plane quickly. It also has the outboard industry’s first two‑speed automatic transmission to optimise engine rpm according to workload.

And it has a steerable gearcase – it pivots independently underwater while the engine’s powerhead remains in a space‑saving fixed position. This provides more room for multi‑engine configurations and a wider steering angle for agile handling. Using contra‑rotating propellers, it also has better ‘bite’ for docking and other close‑quarters maneuvering.

The two‑speed automatic transmission optimises engine rpm according to workload. First gear is 20% lower than second gear, leveraging the engine’s high torque to accelerate the boat and get it up on plane quickly. The hydraulic shifting mechanism eliminates ‘shift clunk’ at slow manoeuvring speeds and uses Mercury Joystick Piloting for Outboards. The two‑speed transmission also contributes to superior fuel economy.

Elimination of the traditional boat‑mounted steering system offers enhanced handling and manoeuvrability – the steering system does not have to move the entire engine, only the gearcase.
And while conventional outboards typically pivot 30° in either direction, the V12’s gearcase can pivot up to 45° under joystick operation. This feature, combined with the lower propeller speed in first gear, provides precise handling at docking speeds.

Enhanced digital controls
In addition to compatibility with Mercury’s Joystick Piloting for Outboards system, the V12 has the Next Gen Digital Throttle & Shift (DTS) system. These sleek and ergonomic controls are even more intuitive with features like push‑button access to Active Trim, which automatically adjusts trim for optimal performance. A Premier dual‑handle console‑mount control for multi‑engine boats includes an integrated digital display that connects boaters with valuable system information and helpful pop-ups. 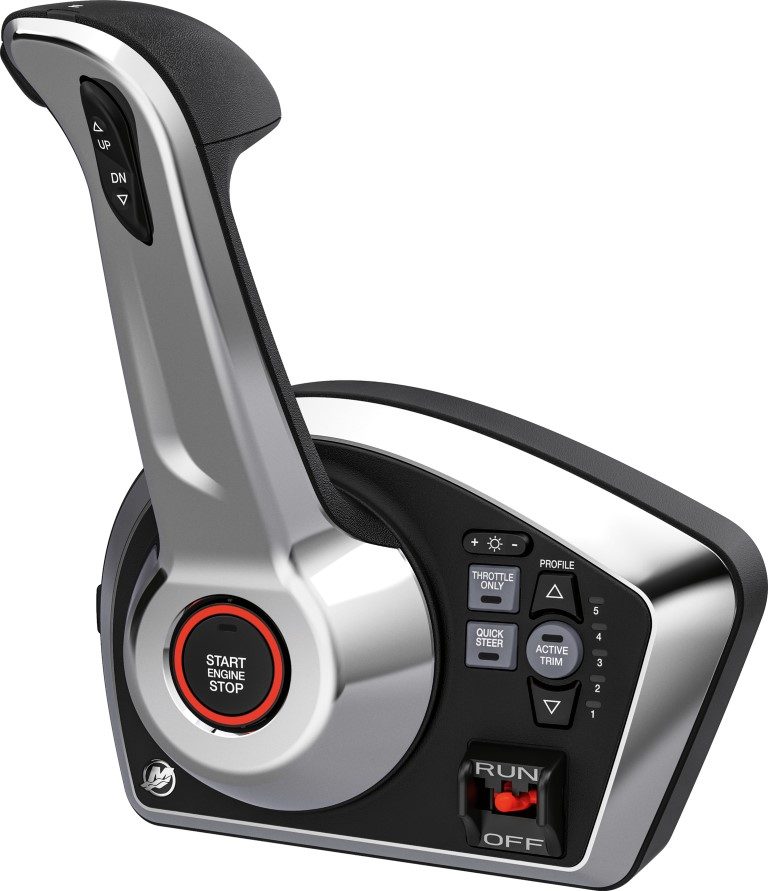 The outboard will be released in New Zealand through selected OEMs and dealers in the second half of this year.