In certain habitats – deep reefs, offshore islands, headlands and rock stacks swept by currents – kingfish are available year-round, but for most inshore areas, they are seasonal visitors. And for the Hauraki Gulf and much of the rest of New Zealand, that season is now, writes John Eichelsheim.

Kingfish are among my favourite fish to catch.

I moved north from Wellington as a fishing-obsessed young man who took a teaching job in Northland so he could catch kingfish. I already knew a bit about the fishing, having already spent several summers chasing the yellow-tailed hoodlums all over the Far North. 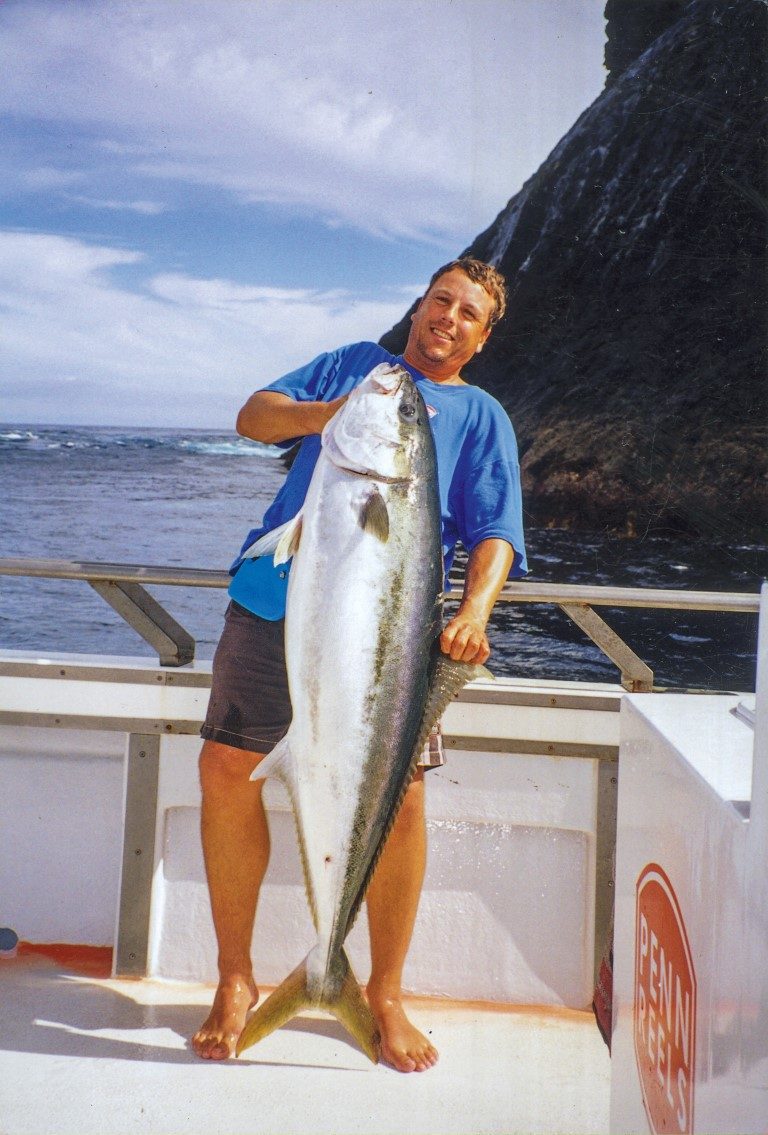 My friends and I caught a lot of kingfish back then, from the rocks and out of boats; on live baits, dead baits and by casting, jigging and trolling lures – even a bit of topwater fishing, though that technique was very much in its infancy.

As I got older, snapper fishing began to take up more of my time, but I never stopped fishing for kings. Indeed, my friends and I took regular charters to White Island, Ranfurly Banks, the Three Kings Islands and other remote locations famed for the size and abundance of their kingfish.

We caught some beauties too, most of them released, with my personal best a Ranfurly Banks fish of 43kg. Sadly, I can no longer find a picture of that fish, though it was published in a fishing magazine years ago.

It’s been a while since I’ve taken one of those charters, due to family commitments, changing priorities, the rising cost of charter fishing and, yes, my advancing years. But I still enjoy catching kingfish, so the summer months in the Hauraki Gulf, when kingfish are relatively common are keenly anticipated. In summer kingfish regularly frequent the Waitemata Harbour and Tamaki Estuary, inner gulf islands and reefs, and hunt deep into the Firth of Thames, as well as and up and down the coast – wherever there is bait fish.

Hauraki Gulf kingfish are generally not in the same size league as Ranfurly Banks or White Island fish, but there are plenty of 12-15kg specimens available and a few bigger ones to keep anglers honest.

Of course, there are also lots of much smaller kingfish, especially shadowing the anchovy schools, which arrived early this season. Many (but not all) of these fish are less than the minimum legal size of 750mm – some of the smaller ‘rats’ weigh just a kilo or two – so any fish caught must be released.

Small kingfish are often mixed in with kahawai, balling up anchovy schools. They are a common enough catch on soft plastics, even when they are not the target – snapper also follow the bait schools – and wonderful sport on fly-fishing tackle (small fly hooks do minimal damage).

In general, though, fishing for small kingfish is not recommended, since some stress and/or damage is unavoidable and unlike with legal-sized fish, you don’t have the option to keep any that may not survive for the table. Kingfish are pretty tough, but careful handling should be part and parcel of responsible fishing.

The trick to catching bigger kingfish is to use larger baits/lures. Live jack mackerel, or better still, slimy mackerel – both species feed on anchovies – fished around the fringes of active work-ups or rafting birds can be effective. Slow-troll or drift-fish them with or without weight. Mackerel are usually found under the flocks of shearwaters that are such a feature of the inner gulf at this time of year. Use bait flies or micro-jigs to catch them.

Alternatively, use lures to catch kingfish. Jigs have their place, especially in deeper water, but the most popular technique at the moment is topwater fishing, using lures that swim and/or splash on the surface. Swimming lures are usually called stickballs (most float, but some sink to swim under the surface) and splashy floating lures are known as poppers.

Topwater fishing is highly entertaining and can be very effective. It works around baits schools and in work-ups, but also around structure and in the high-energy, high current areas kingfish love. It can sometimes take many casts to raise kingfish from deeper water, or they will appear on the very first cast. 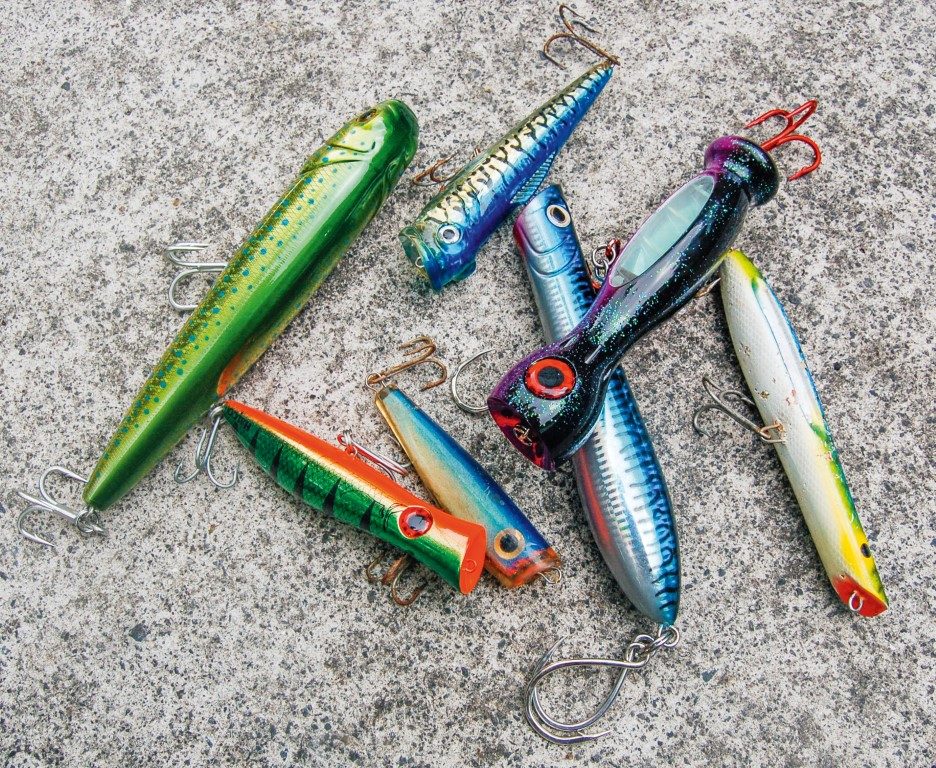 Quite often, if you miss the first bite or fish turn away, you won’t be successful on subsequent casts, at least without a lure change or rest the area for a bit. Anyone who has fished buoys or marker poles will know their first presentation has the best chance of success.

Some places well known for kingfish hold fish all the time, but feeding only happens in short bursts. There can be a lot of casts where the water seems barren before suddenly fish appear out of nowhere to burst all over your lure. Of course, kingfish busting on the surface is heaven for topwater fishers. If their casts are accurate, hook-ups are almost guaranteed.

Stick baits seem to be the more popular choice for kingfish anglers at the moment, but poppers have their place too. Poppers, with their noise and splash, can be excellent at raising fish. If two of you are fishing together, one of you might want to fish a popper while the other tries a stick bait. Sometimes the popper will raise fish, but it’s the stick bait that hooks them and vice versa.

Fishing topwater around anchovy schools works well too. Although many of the kingfish harassing anchovies are quite small, some are not. Bigger specimens patrol the area too, perhaps preying on those mackerel or kahawai intent on a feed of anchovies. These fish will attack large lures like stick baits. You might hook a few undersized kings as well, but the size of the lure tends to discourage all but the boldest of the rats.

With all my topwater lures, I squeeze down the hooks’ barbs as a matter of course, not only to reduce damage to the fish, but also for my own safety should I get a hook in my body. Barbless hooks are much easier to remove from both fish and humans!

A simple technique to locate suitably sized and hungry kingfish is to slow troll-poppers or stick baits in the vicinity of a work-up, or in areas known to hold kingfish – reefs, headlands, islands etc. – working the lures with rod in hand until you raise or hook a fish. You can do the same by trolling a sub-surface lure – a Rapala or a sinking stick bait.

Once a kingfish is hooked, casts to the general area the fish was hooked can provide multiple strikes. Other fish will invariably follow the hooked kingfish to the boat, where you can more easily target them. The rest of the school gets excited when one of their number is hooked and they’ll bite much more readily.