Not far from the Whangarei CBD, a row of tin sheds houses one of the country’s most beautiful work boats and a collection of classic marine diesels. Lindsay Wright went to meet the man behind them.

Many people have stopped to admire the decrepit old fishing boat tied in her berth in the town basin. The elegant sheer, sweeping back from a raised foc’sle, ample beam carried well forward and aft, the small aft wheelhouse and, most of all,

her plump, buoyant cruiser stern are the stuff of dreams. The name, Melodeon, painted on the bulwarks added to the vessel’s mellifluous symmetry.

But the people who know enough about boats to appreciate these things, also know that it takes a special person – someone with the knowhow, time, space, energy, money, commitment and equipment – to tackle a restoration on that scale. 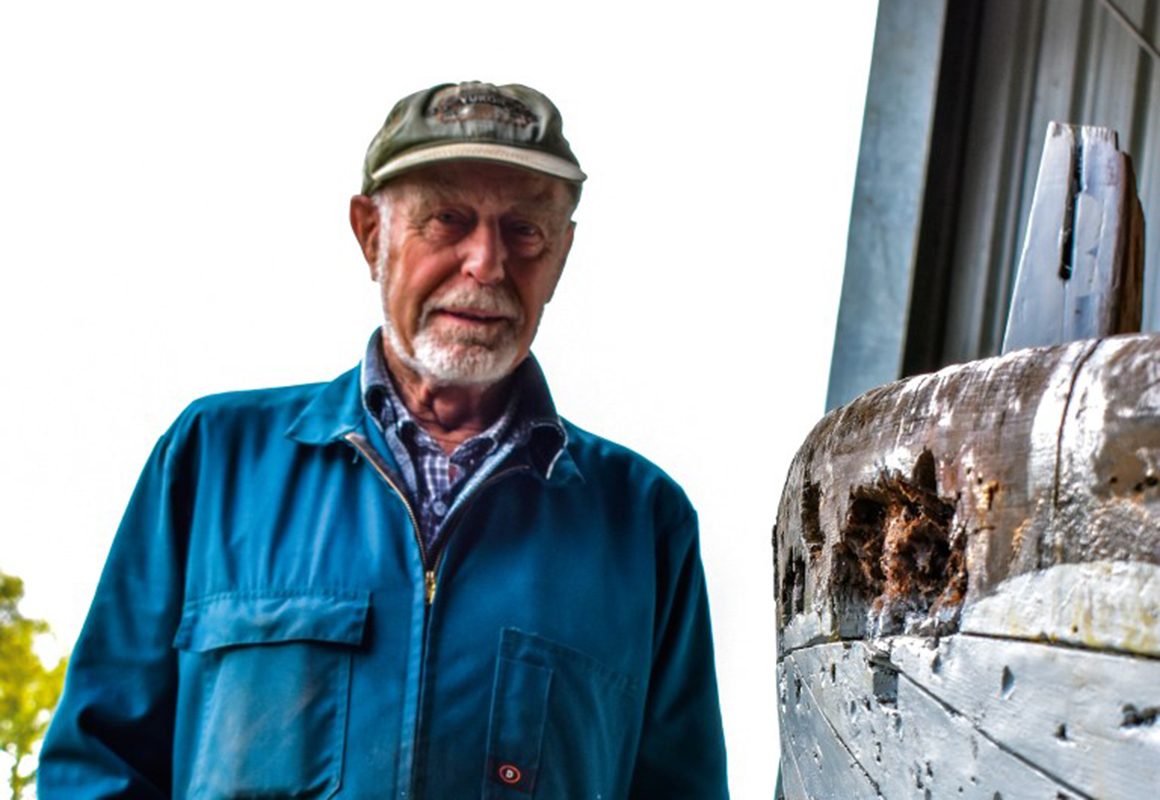 “I could see that unless we took her in hand, Melodeon would have ended up being on a bonfire,” says the 83-year old Whangarei businessman. “We’ll never see boats like that being built in New Zealand again – we just haven’t got the wood – or the skills. She was worth saving.”

The musically-monikered fishing vessel was launched on 18 February, 1935 at the Auckland slipway of Charles Bailey and Son. Built to Bailey’s own design she measured 16.3m long with a beam of 4.6m and drew 2.1m. The graceful ocean workhorse displaced almost 10 tons.

Construction was three-skinned heart kauri with bronze and copper fastenings. The two diagonal layers are 12.5mm and the fore and aft outer layer is 25mm. Freshly named Melodeon, after a delicate musical instrument, she soon began a working life that included war service for the US Navy in the Pacific during the 1940s and fishing all around New Zealand as a seiner, trawler, tuna troller and long liner. 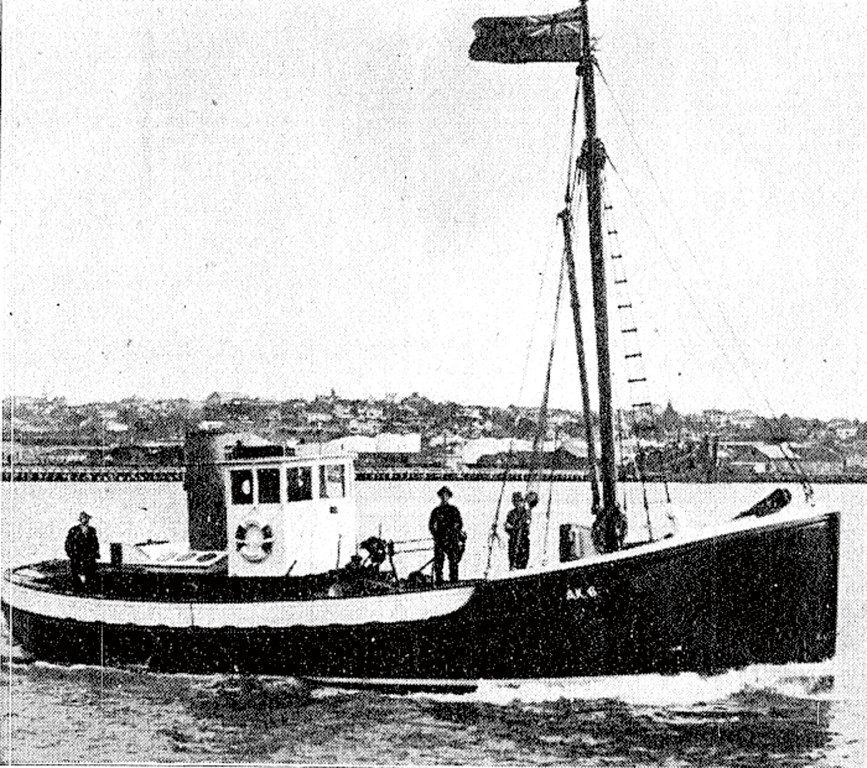 “The original engine was a 110hp Deutz two-stroke diesel which ran at 450rpm,” says Dick, “but during the war years Mr Hitler didn’t like selling spare parts to the US Navy. When the Yanks commandeered her the agreement was that she be returned in the same condition she left in – so she was reengined in 1960.”

The new power plant was a T8 straight-eight-cylinder Kelvin diesel which came complete with a Kelvin 3.3:1 reduction hydraulic gearbox, bronze prop shaft and stern tube. “It develops 240hp at 1000 rpm,” says Dick, “and, swinging a 58” x 48” four-bladed prop, gives her 10 knots at 800rpm using about 15 litres of fuel an hour.”

It was also alleged that a petrol stove ignited in her foc’sle during her war service, killing some crewmen. The resultant damage was fully restored post-war at the Bailey yard on her return to Auckland.

“The original contract for building her said it would take 23,000 man-hours,” says Dick. “That’s about $1.2 million in modern terms ($60 an hour) – so you can see why they aren’t building boats like this anymore.”

But the last few decades have been hard on the venerable fishing boat. Seining with 3½ tonnes of lead-cored ground rope coiled on her deck and long hours at sea with a maintenance programme designed to keep her working have taken their toll. Her last skipper, Greg Hayes, was eyeing retirement and needed someone to take Melodeon into retirement with a complete restoration.

“Greg said he didn’t want her to go to tyre-kickers or dreamers – so we agreed on a fair price and by late 2018 I had my next project,” says Dick. 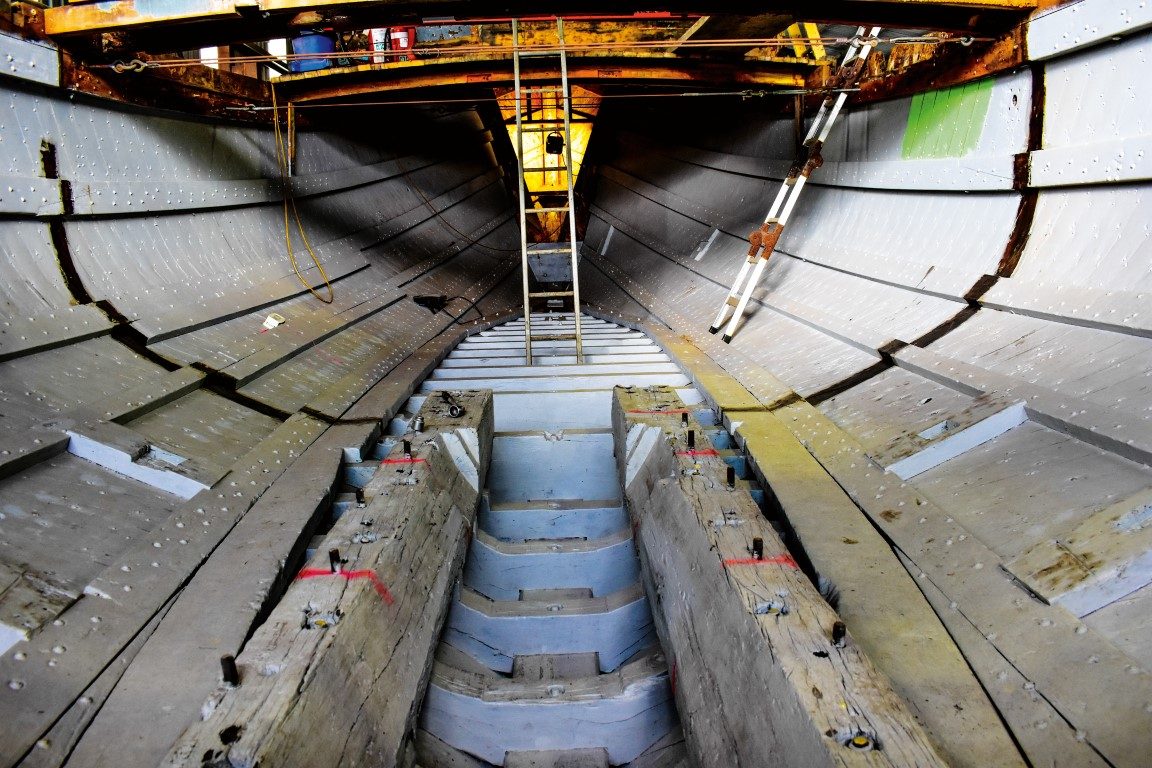 Big projects are nothing new to him and son Richard. “Dad built a 38-foot launch called Orari, after the ship he emigrated on,” explains Richard. “Orari was launched the same year I was – 1937 – and is still around somewhere up the Tamaki River.”

Later, while setting up his galvanising business, he found that he had a bit of spare time on his hands so “I thought I’d build a boat.” He made a model of his ideal (at the time) boat and took it to (boat designer) Ces Watson for fine-tuning. “I think Ces must have worked on Melodeon at some stage because the new boat, Hamal, ended up with almost exactly the same stern.”

Built in steel, Hamal measures 22m overall with a beam of 6.5m and a draft of 2.9m. The 90-tonne expedition vessel is powered by Dick’s powerplants of choice; two 8L3B Gardners rumbling along at 900rpm producing 240hp a side. She carries 12,000 litres of diesel – enough to take her almost anywhere in the world.

After seven years abuilding, Hamal was launched in 1975 and Dick started looking for another project. The former Auckland pilot boat, Akarana came into his sights so he and wife Colleen bought the shapely launch and began a five-year restoration project.

“The original contract for building Akarana was 26,000 man-hours and we reckoned she’d done about 700,000nm. She’d been through five engines since her launching in 1960.” The existing Caterpillar was replaced with a 1960 Gardner 8L3B which had been used in a Fouveaux Strait oyster dredge. Now an immaculate cruising launch, the Akarana refit was a useful learning curve for restoring Melodeon.

“We motored Melodeon down to Dockland 5 to haul out,” he recalls. “The hydraulic steering was a bit stiff which made it pretty interesting. We cut the wheelhouse off and put it on the deck to reduce clearance for bridges and powerlines, loaded it on Boat Haulage’s low-loader and took it up to our workshop in Kamo.” 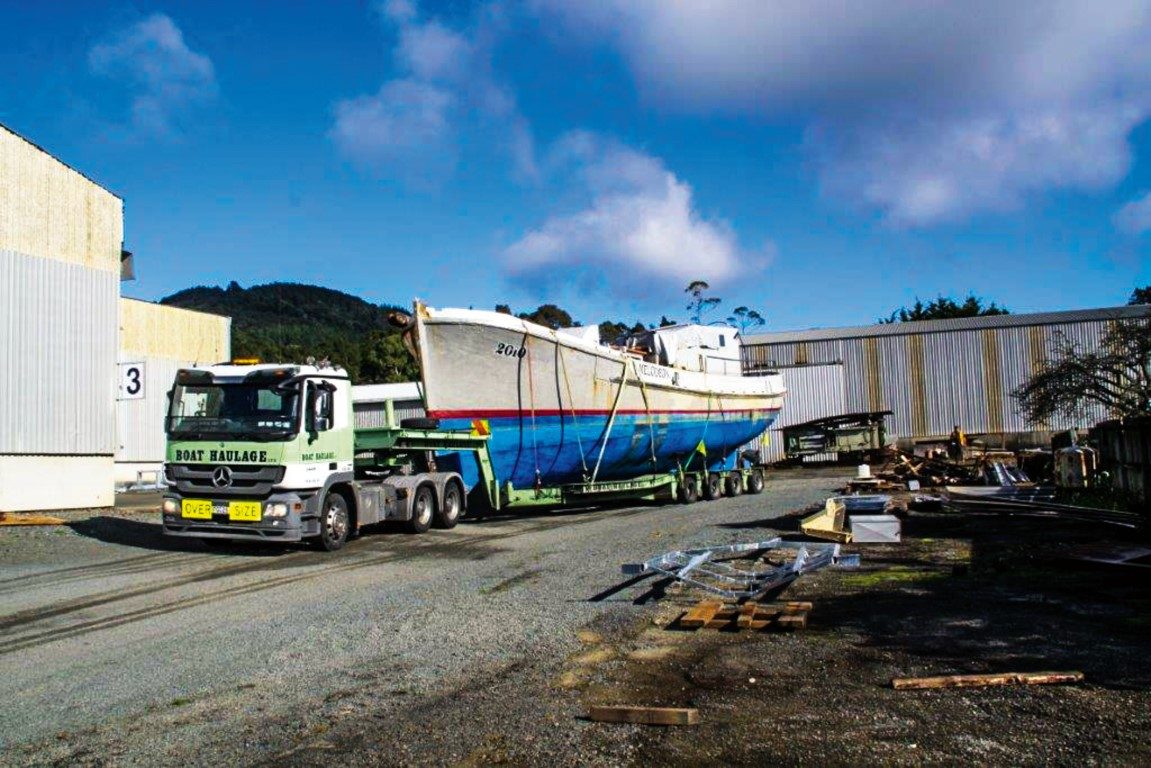 The boat weighed over 50 tonnes but nine tonnes of that was lead ballast spread through the bilges and 4½ tonnes of engine and gearbox. “Once in position the interior was stripped and decades of rusted pipework, redundant fittings and tangles of wiring dumped overboard onto the workshop floor.”

Next the hull was gently blasted inside and out with garnet. “That knocks off all the loose scale, putty and salt so you can see what you’ve got,” he says. The blasting also revealed that Melodeon had seven different waterlines – the highest of which gave her a draft of 2.27m.

Otherwise she wasn’t too bad. The 50mm kauri decks had been iron-fastened and were beyond recovery, so they had to go and it took several water blasting episodes to remove all the ‘gunk’ that had accumulated in the bilges.

The deck will be replaced with two or three layers of 16mm plywood, fibreglassed over. Once the hull was clean and dry the wood was treated with preservative and painted with a ‘holding’ primer.

The engine bearers had no transverse stiffeners so “the Kelvin must have been shuffling around down here for years.” A new steel engine bed was fabricated. Slight patches of rot were found amidships on the starboard side but the rest of the structural timbers were in good shape. 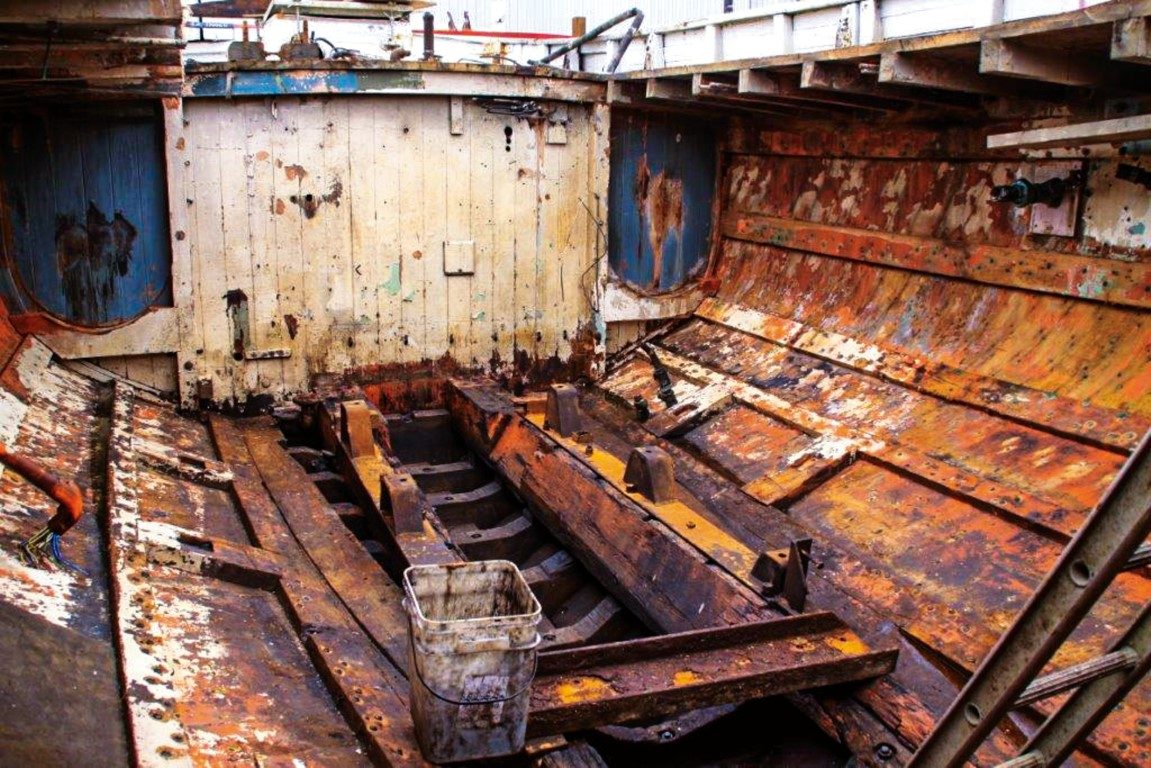 Nevertheless, Dick decided to sheath the hull in diagonally-laid 16mm treated pine and fibreglass. “I know the purists will give us a hard time for it,” he laughs, “but then they’ll go and get on their smart phones.”

The old Kelvin engine was next and underwent a full strip-down and clean. No wear was detected in the crankshaft journals so they were simply polished but Kelvin Diesels, which still exists as a division of British Polar, supplied a new set of exhaust valves and gaskets. 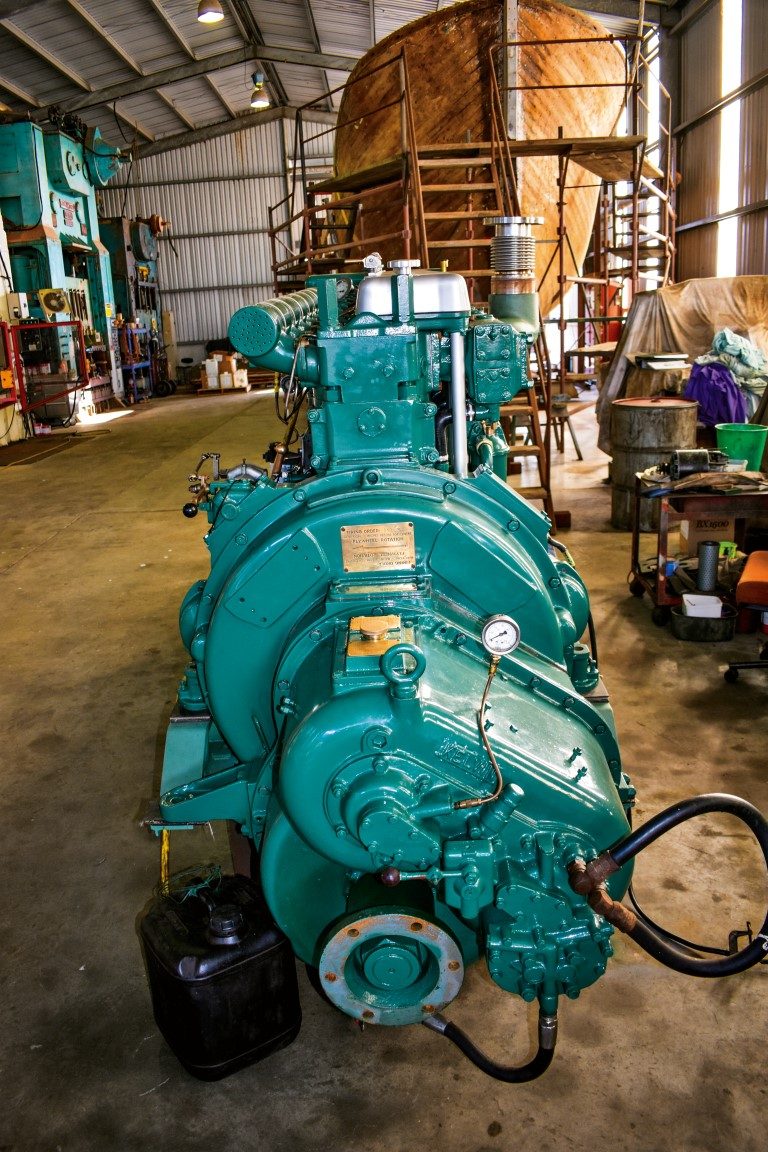 “It’s in remarkably good shape – by all accounts it’s done well over 100,000 hours – and most of that working hard.” Finally, the big Kelvin was blasted with fine sand at low pressure and painted with epoxy to an ‘as new’ factory finish.

Melodeon’s stocky wooden mast has been removed for refurbishment and will be replaced to use with a ‘jillson’ lifting tackle or carry a small steadying sail.

“To date most of the work has been carried out by me and Richard. The engineering side of the restoration we can manage ourselves. We now realise we need a skilled boatbuilder to assist us with the woodworking,” says Dick. “We don’t want to alter the overall design, although the wheelhouse needs to be a little bigger.” 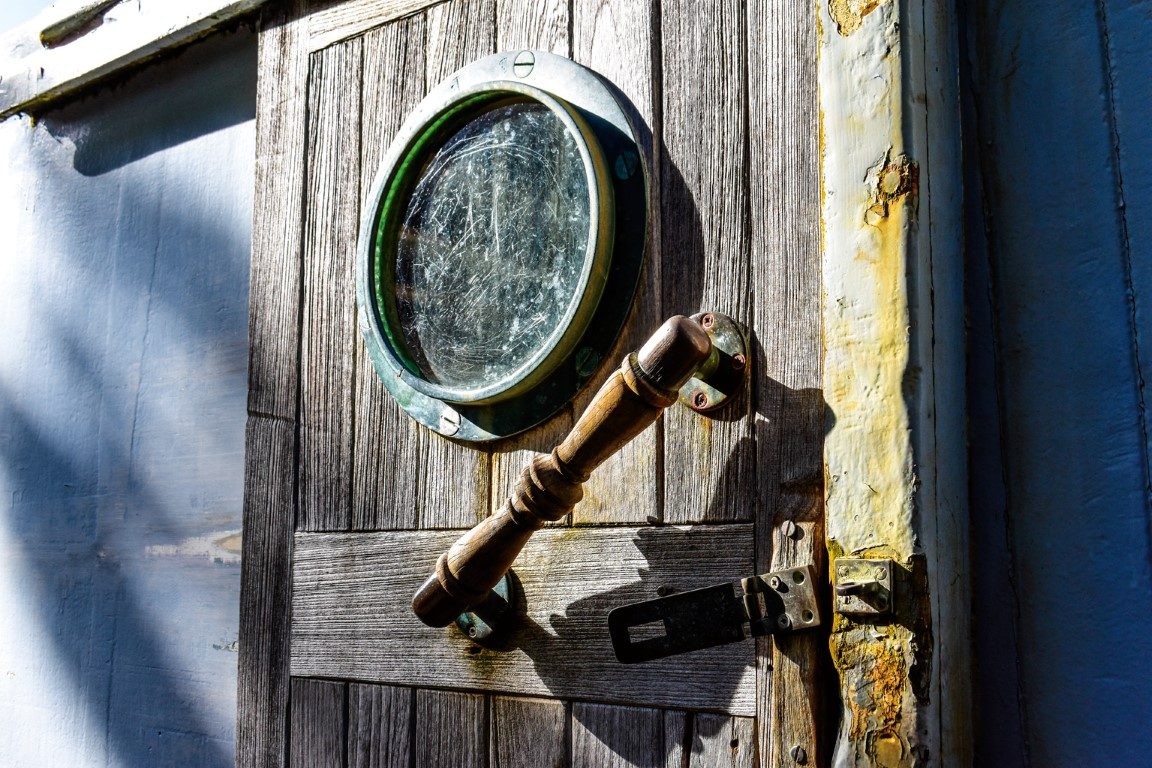 Melodeon’s restoration team knows enough about big projects not to put a timeline on her relaunch but “I think she’ll be a great fun boat for someone. She’ll cruise at nine knots, be relatively cheap to run and need fairly minimal maintenance.”

He shakes his head ruefully: “I really don’t know why we’ve got all these boats, but you can’t just let them go to the scrap heap. In the right hands, she’ll be good for the next 100 years.”