There are a few important factors you need to run a successful women’s regatta: a great location, superb sailing conditions – and plenty of high-quality wine. Story  by Sarah Ell. 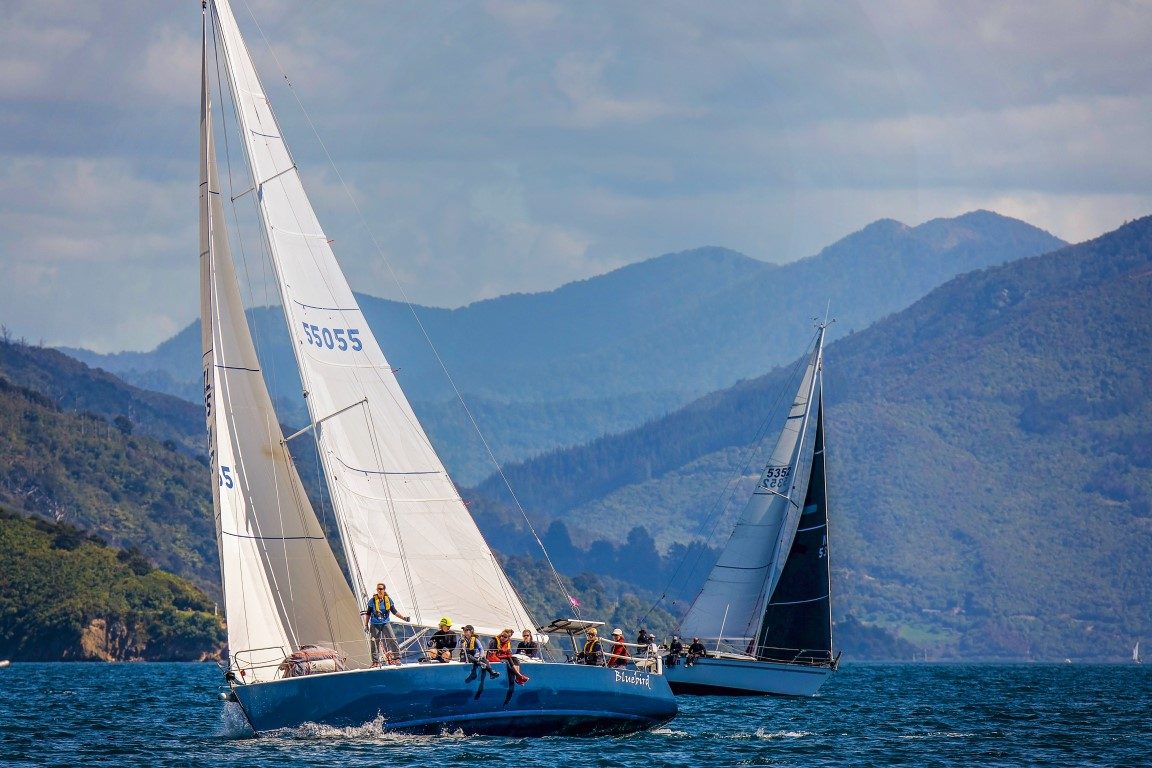 Waikawa’s been running the event for several years, and it’s growing – this year there were 24 crews competing, up from 17 in 2019. Even Covid-19 couldn’t stop it, though there were a few anxious moments for the Auckland crews in the weeks leading up to the event. But in the event it was masks on for a weekend in a slightly chilly version of paradise.

The regatta’s open to all female sailors, either full crews or individuals, who are then assigned to teams. Crews must be at least 50% female (with a woman on the helm) and local boats are chartered to race.

The focus is on fun and participation but there’s also a definite competitive element – this year there were two former women’s national champion teams competing, along with crews from Tauranga, Christchurch, Wellington and Nelson. 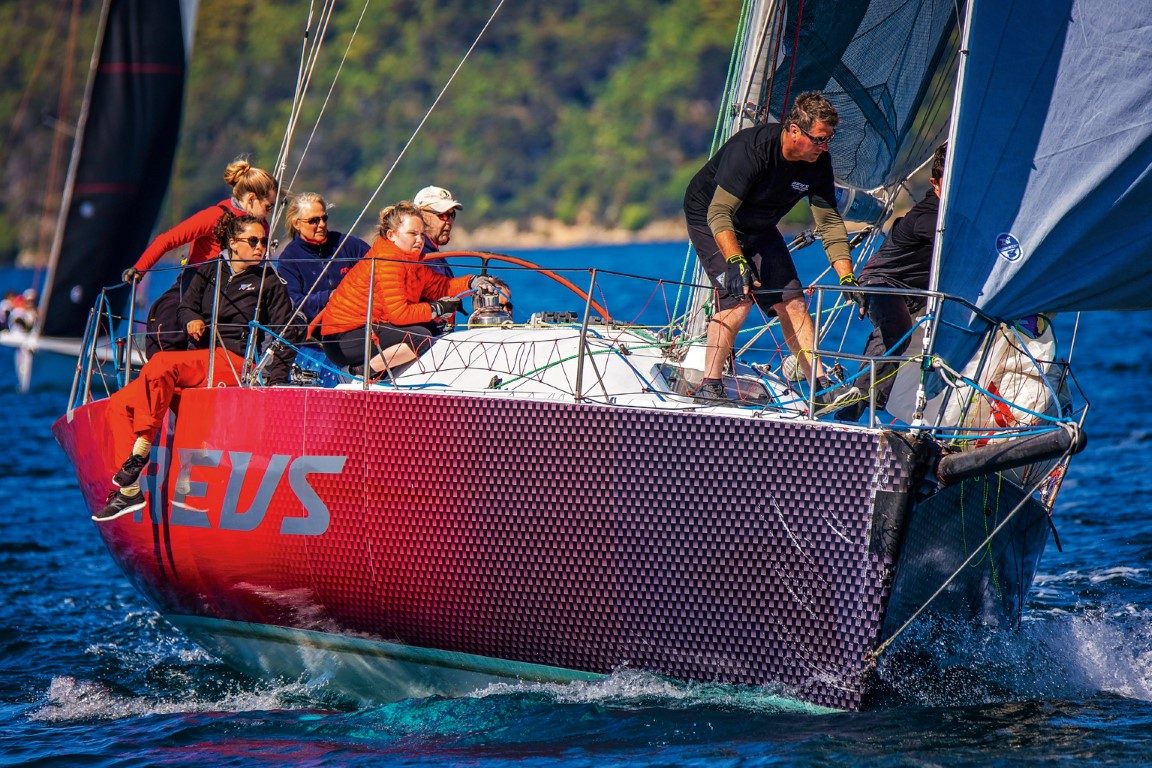 The team I sail with, the Marine Insurance Sailing Squad (MISS) led by Sally Garrett, won the event in 2019, and the crew came home full of stories and enthusiasm. I was determined not to miss out this year, and months before this year’s event (September 18-20) we’d kept our fingers crossed that regional travel would be allowed.

Flying down to the regatta, we bumped our way through the weather front that would sweep up the North Island (and wipe out a truck on Auckland’s Harbour Bridge), landing in Blenheim to grey skies and a distinct feeling of snow in the air. But by early afternoon the sun was shining and the touch of white on the hills above Picton quickly melted away.

We were lucky enough to be able to charter the same yacht the Mariner team won on last year – Global, a Beneteau First 367 owned by Marlborough farmer Dave Grigg. Dave’s a fantastic chap – he was happy to let us to take over his boat and just do what he was told. 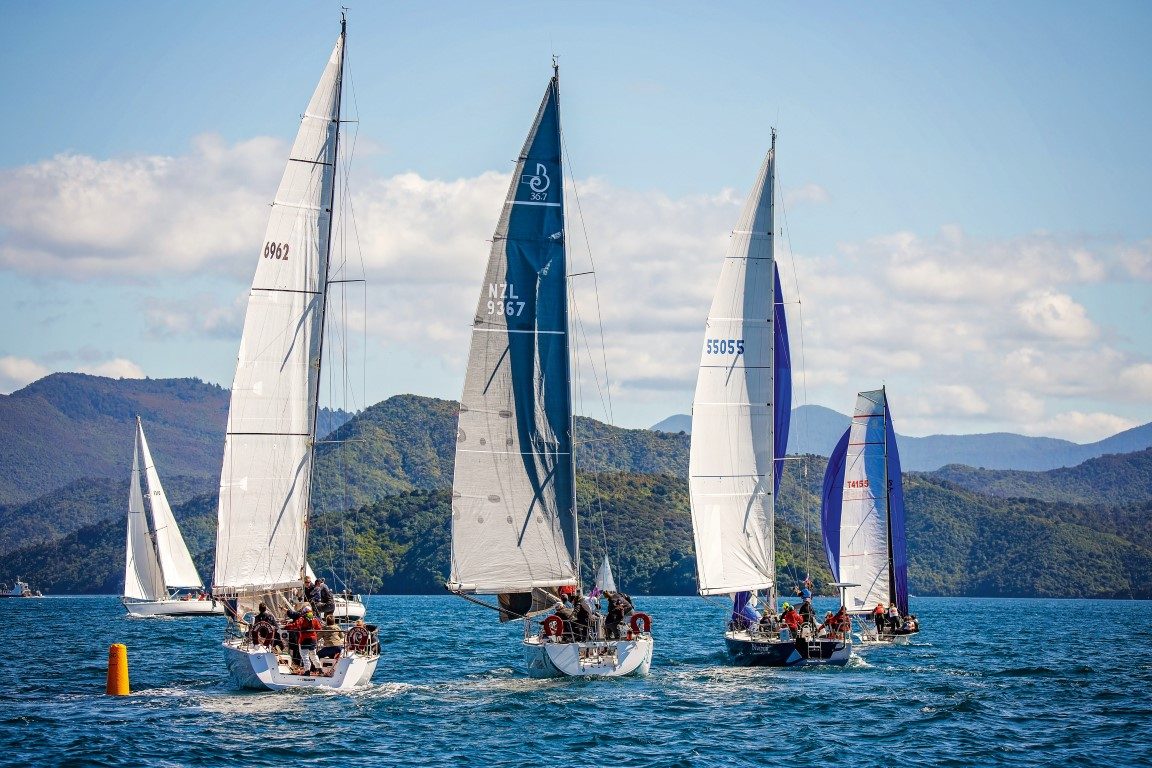 This included trimming, providing vital local knowledge on the tricky Totaranui/Queen Charlotte Sound and making cups of tea between races. Another advantage to sailing Global is that it is about the same size as the MRX we usually sail on in Auckland and has similar systems, which made it easy for us to jump on and race.

My job for the weekend was trimming, along with Dave. Making up the rest of the MISS crew were skipper Sally, Jenny Price and Emma Stenhouse on bow and mast, Christine Weston on keyboards, and Sally’s partner Neil Easton as a floater.

The festivities – I mean the regatta – began with one of the highlights of the weekend: a cruise on Waikawa members’ launches out to a private bay for a comprehensive tasting of a flight of Mud House Wines.

This year the destination was the family bach of Kiwi Yachting founder (and regatta sponsor) Richard Macalister and his wife Isabel, who graciously allowed a gaggle of sailing women to descend upon their private haven, look around the gardens and drink wine in the sunshine on their beach. 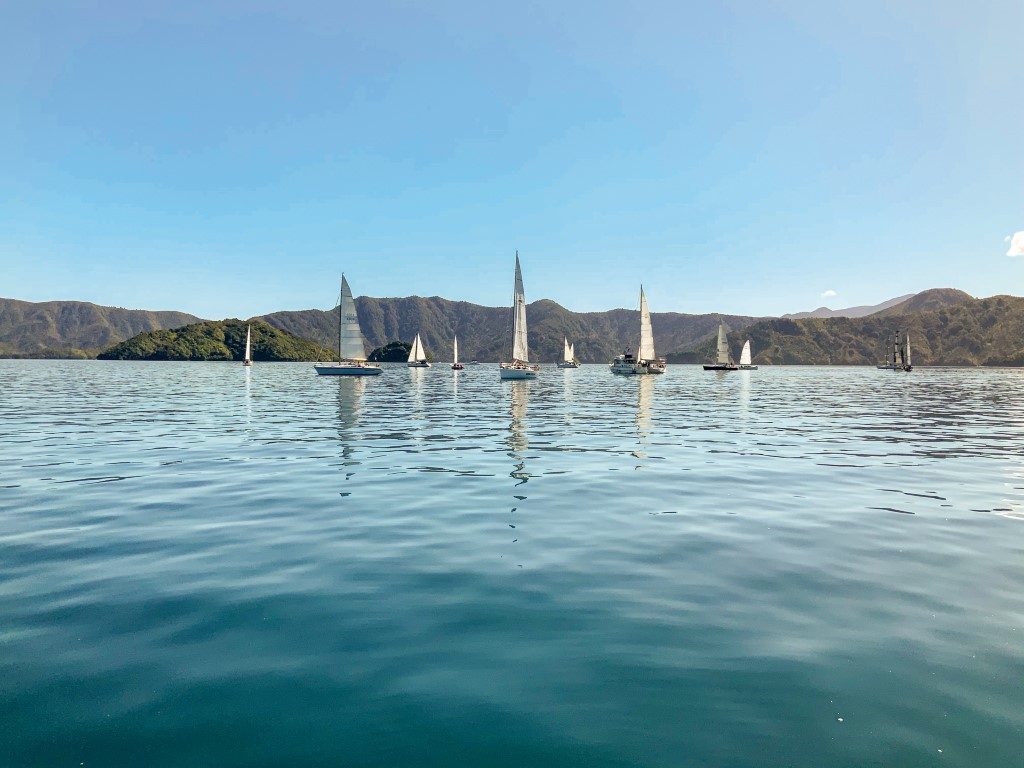 On the cruise out to Macalister Cove, on the eastern side of Blackwood Bay, we were treated to a spectacular show by a huge pod of common dolphins, who seemed happy to come along for the ride and put smiles on everyone’s faces.

Saturday morning dawned beautifully clear and cold, with two Sounds races scheduled. We waited for wind in impossibly picturesque conditions, watching a seal sunning itself on the surface, one flipper in the air as if it was a solar panel.

In contrast to the Hauraki Gulf, it was like sailing on a lake, the satin-smooth waters of Totaranui hemmed in by dark-green hills, receding in the distance down the sound. And instead of avoiding the usual bunch of Auckland day-trippers there were several interisland ferries and a honking log-carrier departing from Picton.

Once the breeze came in the committee sent us off down the Sound on an upwind leg, then a two-sail reach towards Luke Rock at the entrance to Ruakaka Bay, opposite the Tory Channel, with the intention of a kite ride back to the finish.

But the race quickly turned into a masterclass in Sounds sailing, with the breeze coming, going, changing direction, building, dying out, and shifting left and right – sometimes all within the space of a few minutes. 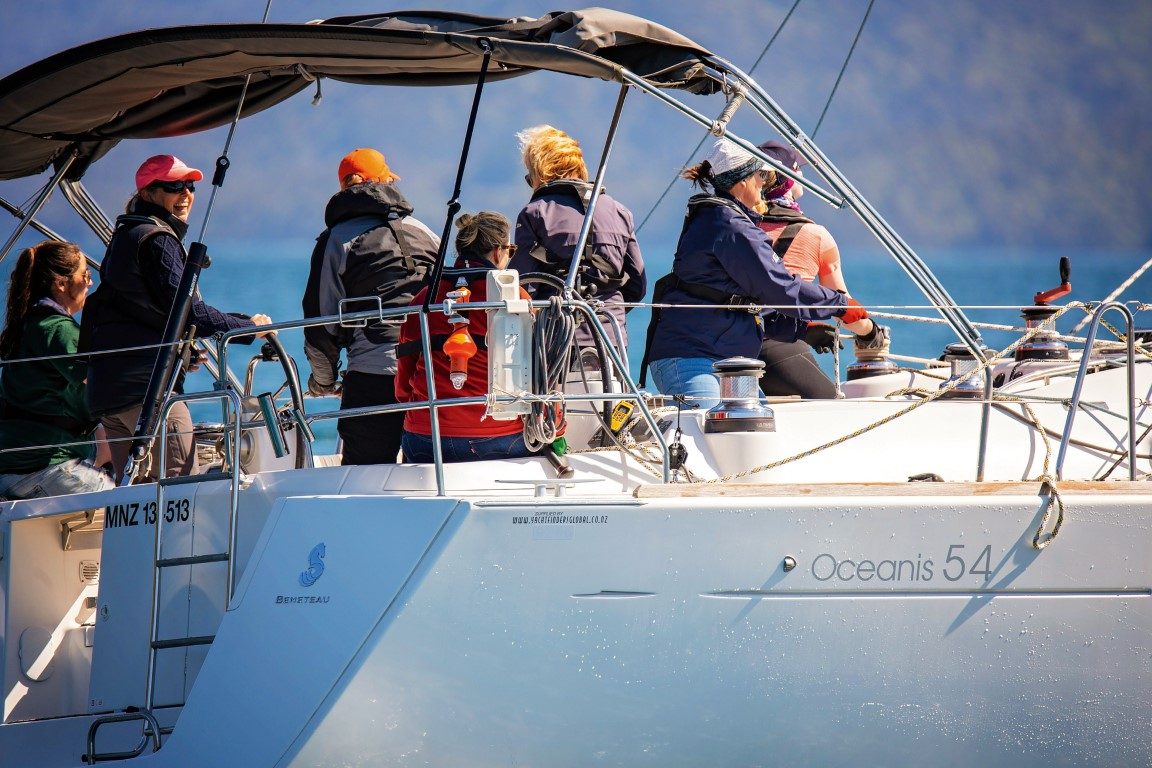 Fortunately, with a combination of Sally’s meteorological know-how and Dave’s local knowledge, we tiptoed our way up the southern shore past the mouth of Whatamango Bay and emerged from the minefield with only the Ross 40 Revs ahead of us.

The course was shortened to finish at Luke Rock, and the other Ross 40, Satellite Spy, ran us down on waterline length just 200m from the finish line, but the Farr 30 Loco couldn’t quite catch us. Another nail was hammered in our handicap coffin as we crossed the line third.

After a leisurely cruise back up the Sound to Waikawa to start race two (enjoying the lunches provided as part of our entry fee), the racing began in a building breeze. The course was a triangle around Allports Island in up to 18 knots of cold southerly. Again, we took the southern shore to the top mark, then bore away and hoisted for a fast, tight kite ride across to the island. 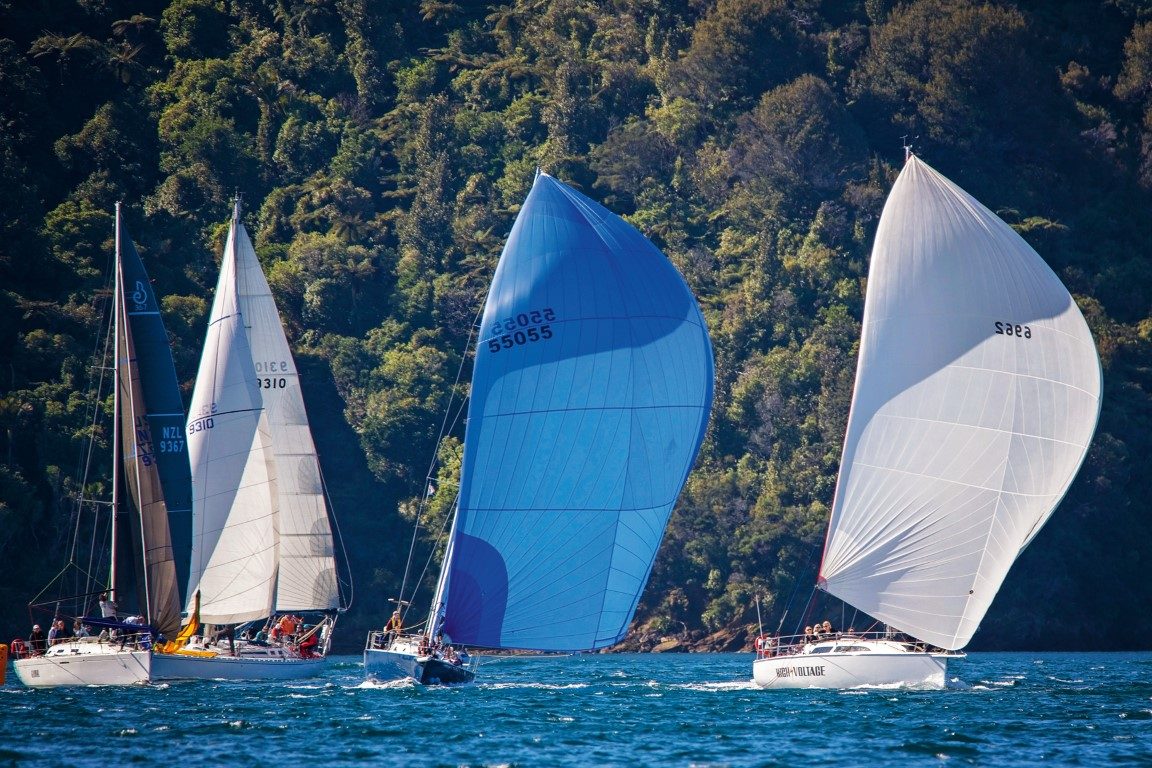 The breeze did its ‘Sounds’ thing again when it came to the gybe, and after watching several of the other boats ending up on their ears we decided to drop and two-sail into the finish.

On Saturday night the yacht club hosted a dinner with guest speaker, but in the interests of social distancing we Aucklanders surrendered our tickets and had an early night before heading back out onto the Sound on Sunday morning for two windward-leeward races.

Just as well we’d rested – after another long wait for breeze it came in with a vengeance and we were straight into a vigorous windward-leeward in winds of up to 20 knots. True to form, though, it dropped back out again and we’d almost reached the time limit when the race committee, with admirable enthusiasm, managed to get the last race away to complete the series.

With a rather strenuous handicap (inflicted after winning every race in 2019), the best the MISS squad could manage this year was fifth overall in division one, but we still walked away with plenty of wine – and, more importantly, the 100% conviction that we will be back next year.

The Mud House Regatta has become one the largest women’s sailing events in the country, and no wonder. Everyone who comes and sails it wants to come back again and again, for that blend of fun and camaraderie, good racing and beautiful views.

Fjord and Moody at SCIBS