Sam Fortescue meets a boat that redefines the art of the possible in sustainable design.

“There are just three vertical lines on this boat – everything else is at an angle,” says Nigel Stuart, the managing director of Spirit Yachts cheerfully when he shows me around the yard’s new flagship.

At 111ft LOA, Geist (German for spirit) dominates the small marina basin at Woolverstone on England’s muddy east coast. Gleaming brightwork is her calling card, but there’s really much more to this yacht than meets the eye. She is one of the most sustainable boats afloat, while her wood-rich interior elevates cabinetry to an artform. 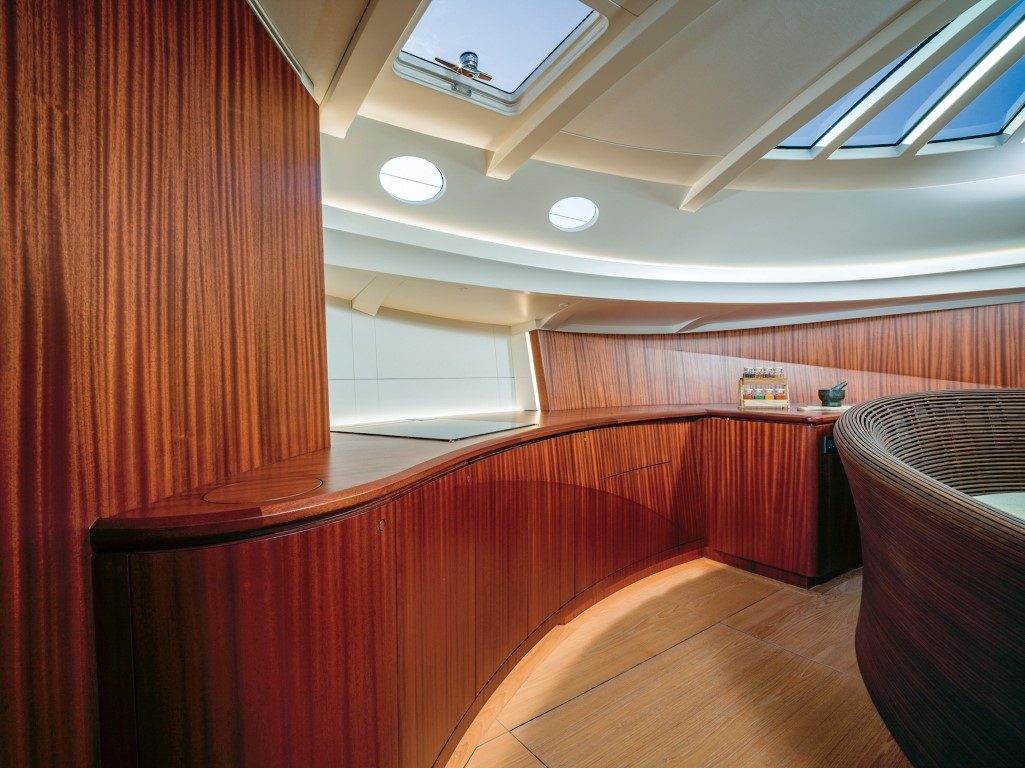 Her German owner knew from the outset that he wanted a piece of art, and previous experience from owning a Spirit 52 had convinced him that the Ipswich yard was the outfit to deliver it.

“In most larger yachts, space is gained at the cost of detaching yourself from nature – higher freeboard and bulwarks for example,” he explains. “Being close to the water and to the environment is what drew me to yachts in the first place and this became central to my inspiration. Sean McMillan [founder and head designer of Spirit Yachts] and I sat down discussing this from the early stages. He was keen to take on the design brief, and he gave me the confidence to push on with the project.”

The result of that collaboration is an achingly elegant sloop with long, traditional overhangs fore and aft. “The counter fell out of favour with designers in the ‘60s when hulls began to be optimised for marina berths and accommodation, rather than looks or performance,” says McMillan. “But the counter on such classic designs is where the speed comes from. If it looks right, it is right!” 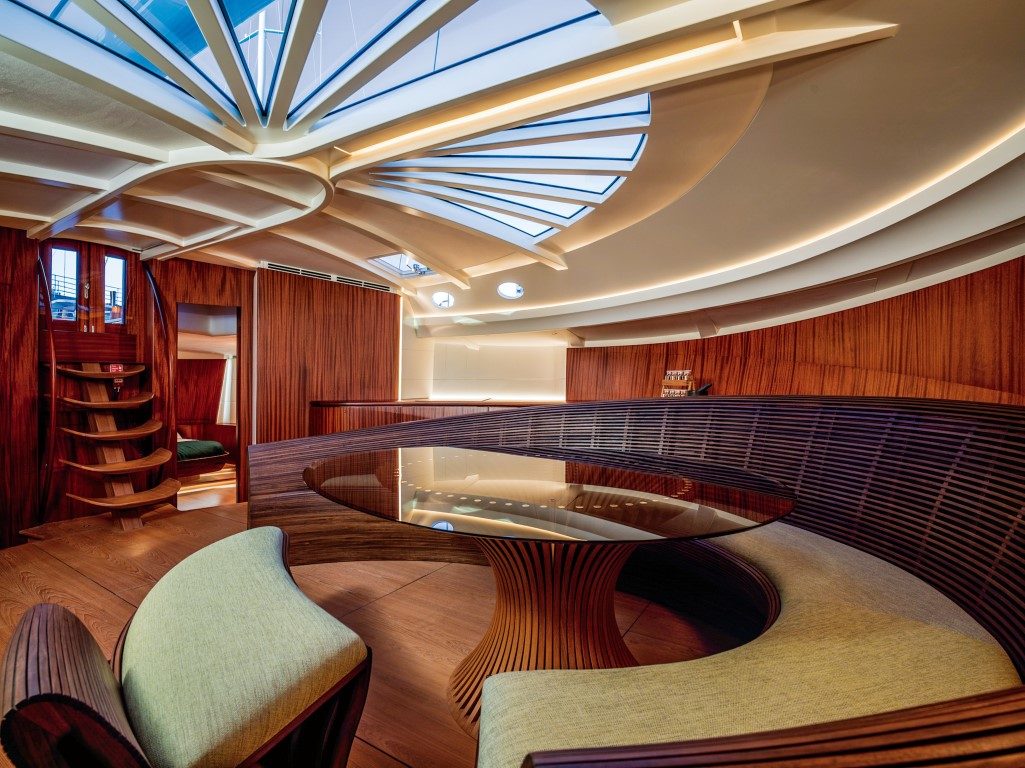 One of her most striking external features is the large fanlight window to the front of the coachroof. It is a feature which has become something of a trademark for the yard, adding hundreds of man-hours to the build time. The rich mahogany of the topsides and coachroof contrasts with the pale teak decking – the last that Spirit will ever install as it shifts to sustainable, engineered Lignia softwood.

The cockpit gives a taste of what awaits below, with its organic curves. It forms a circle within an oval, where the 6-foot radius mahogany wheel is separated from guest or crew seating in a central pod. 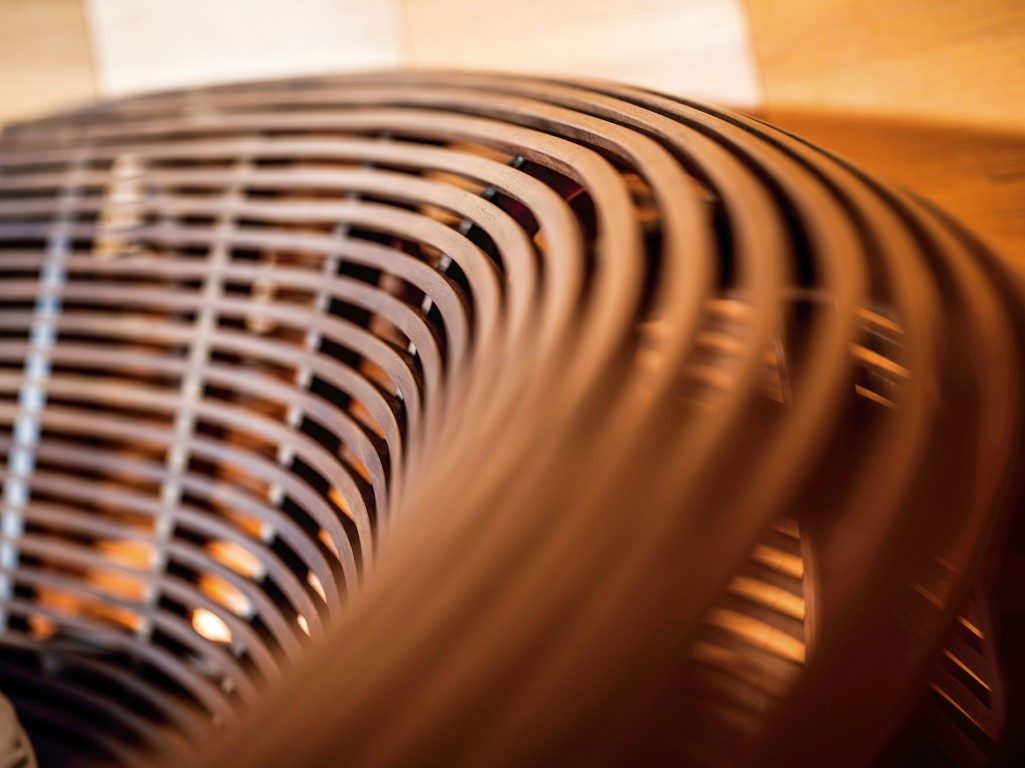 There is pretty much every mod-con that recent technology has brought to sail management and navigation systems here; but it is all hidden. A state-of-the-art touchscreen plotter, plus hydraulic controls, navigation data and so on are set into a panel by the helm, but a lustrous wooden cover folds down to disguise the space as part of the cockpit coaming.

Step below, and the wood becomes an order of magnitude more intense. Rich sipo-panelled walls curve away on either side, with a huge expanse of teak flooring underfoot. There’s barely a vertical line in evidence, because every plank in the panelling is precisely bevelled and inclined so that the curve gets wider as it rises. 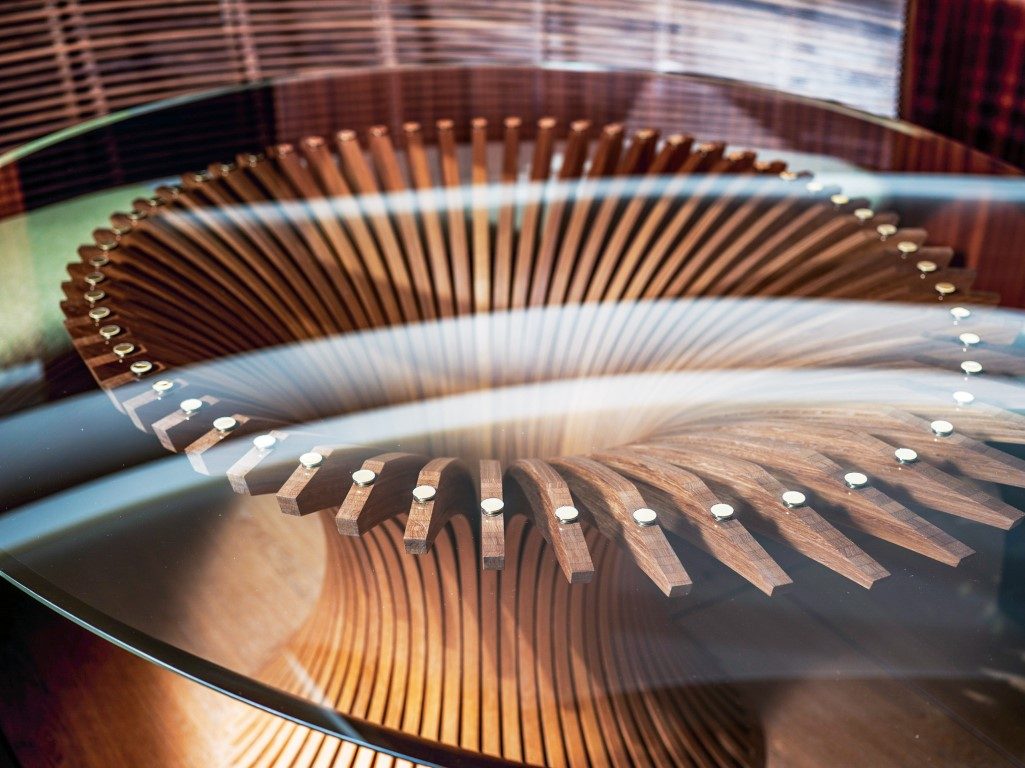 McMillan says: “Her interior is totally unique. The design is a never-ending swirl of organic shapes, encompassing the practicalities necessary in a yacht but in a highly imaginative way.”

And he’s right. For example, there is a capable galley here. But the induction hob, fridge, sink and so on are all hidden away along a recessed counter that sweeps round to follow the curve of the saloon. 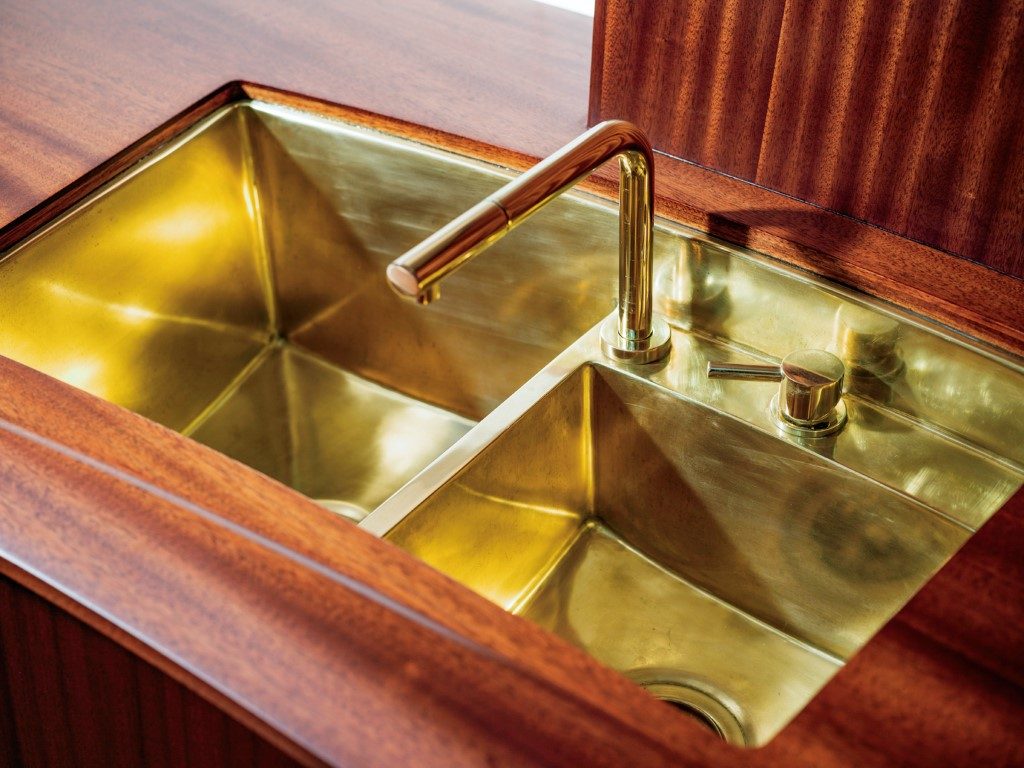 There is a lot of storage space here, but an untrained eye wouldn’t know it, because there are no handles or open lockers. “Paradoxically, the interior design made the optimisation of the ‘hidden’ spaces more acute as the amount of technical equipment on such an advanced yacht had to be hidden in these spaces – not an easy task!” adds McMillan.

The undoubted focal point is the many-layered swirl of the saloon table and its seating. I could hunt for further words to describe its sinuous form, but perhaps a few cold details will do it better justice. 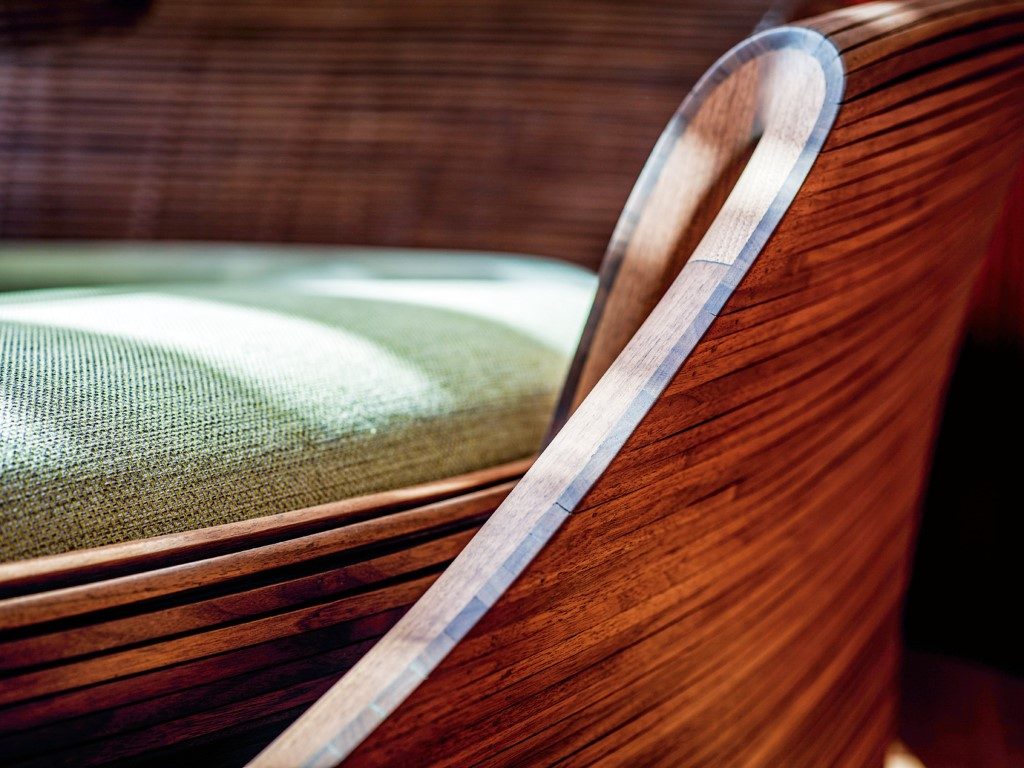 Built from specially selected American walnut, the seating is composed of hundreds of strips measuring 10mm by 10mm in section. They were built by former employees Will Fennell and Ben Jackson, who spent an eye-watering 2,000 man-hours on this element alone. They also built the similar-looking bed heads that appear in the master cabin, the VIP and two double guests cabin aft, resembling a nest more than a berth. 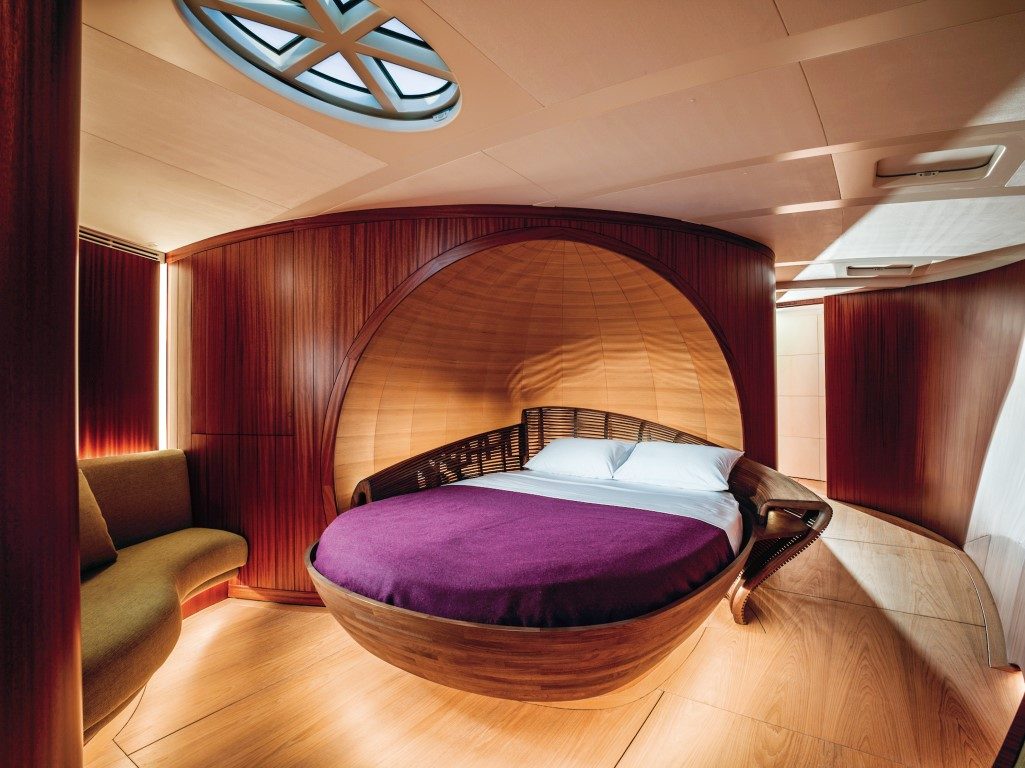 Designer Jonathan Rhoades describes his vision for “warm soft flowing walls” laid out in a double ‘S’ shape like an infinity symbol. “While appearing simple, these twisting forms are coordinated perfectly with the beautiful skylights above creating a calm and tranquil ambiance. These elegant forms not only twist and peel to create counters but uniquely create the intimate back drops for the highly detailed ‘steam pieces’ which blur the line between furniture and sculpture.”

Wood has free rein. The basins in the heads are carved from solid blocks of mahogany; the seats are wooden, as are the shower trays and walls. Clever use of indirect lighting accentuates the warmth of the wood, which all has a naturallooking satin finish. The owner was adamant he didn’t want light switches littering the walls, so there aren’t any. 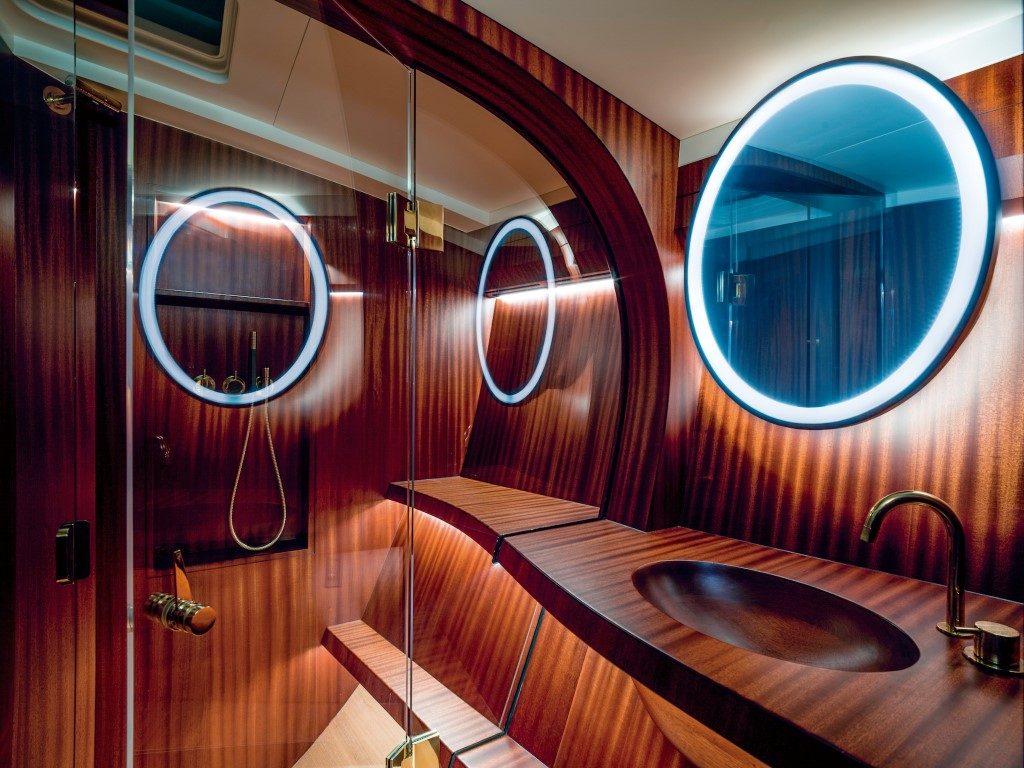 “Motion sensors turn lights on and off during the day,” explains Stuart. “At night, sensors under the beds detect if someone is up and light the way to the nearest ensuite. If a guest starts to go elsewhere within the interior, the system will deduce which way they are going and light the relevant areas in a very soft, warm light.”

That hasn’t been all plain sailing, and when I see the boat alongside in Ipswich, an engineer is ferreting away under the master bed to recalibrate one of the lighting sensors. Apparently it was switching on too readily.

If wood characterises the interior, it is more than skin deep. Just like every Spirit yacht, the hull’s construction blends traditional techniques and modern materials. The sipo mahogany frames are laminated from 6mm-thick strips that are bent into the required shape and glued together – I count more than 12 of them in one slight bow frame alone. These frames are then positioned upside down at precisely marked points along a rough scaffold laid out on the floor of the boatbuilding hall. 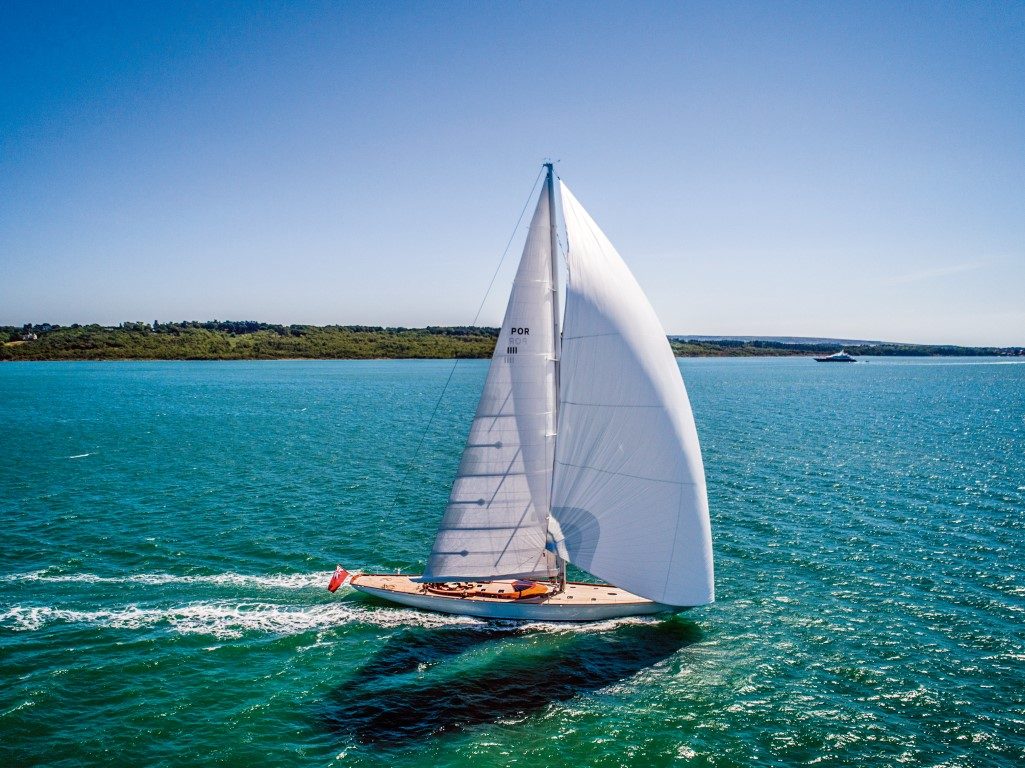 Stainless steel framing is used amidships to strengthen the area around which all the stresses from the rig are concentrated. Then the wooden keel goes in along a specially prepared channel on the bottom of the frames.

Planking goes on top of that – long strips of Douglas fir screwed and glued to the frames. Two cross-set veneers of 3mm khaya are glued to the outside of the planks, then two layers of E-glass and the whole is vacuum infused with epoxy to seal it. “In the end, it is more akin to GRP,” says McMillan.

I am struck by how flat the bottom of the boat really is. She has the underwater profile of a carbon-fibre racer, complete with modern spade rudder and T-keel. Working against that 25-tonne lead bulb on its 3m steel blade is a 41.6m-tall carbon mast by Hallspars and up to 450m2 of sail – enough to really push the boat hard.

She reaches her 11-knot hull speed in around 16 knots of breeze, with potential for up to 15 knots flying the asymmetric on a broad reach. “I have been very impressed with her sailing so far; she is fast and beautifully smooth to helm,” says the owner. “I love racing at the classic regattas on my Spirit 52, so the yacht needed to be similarly competitive with a performance rig and sails.” 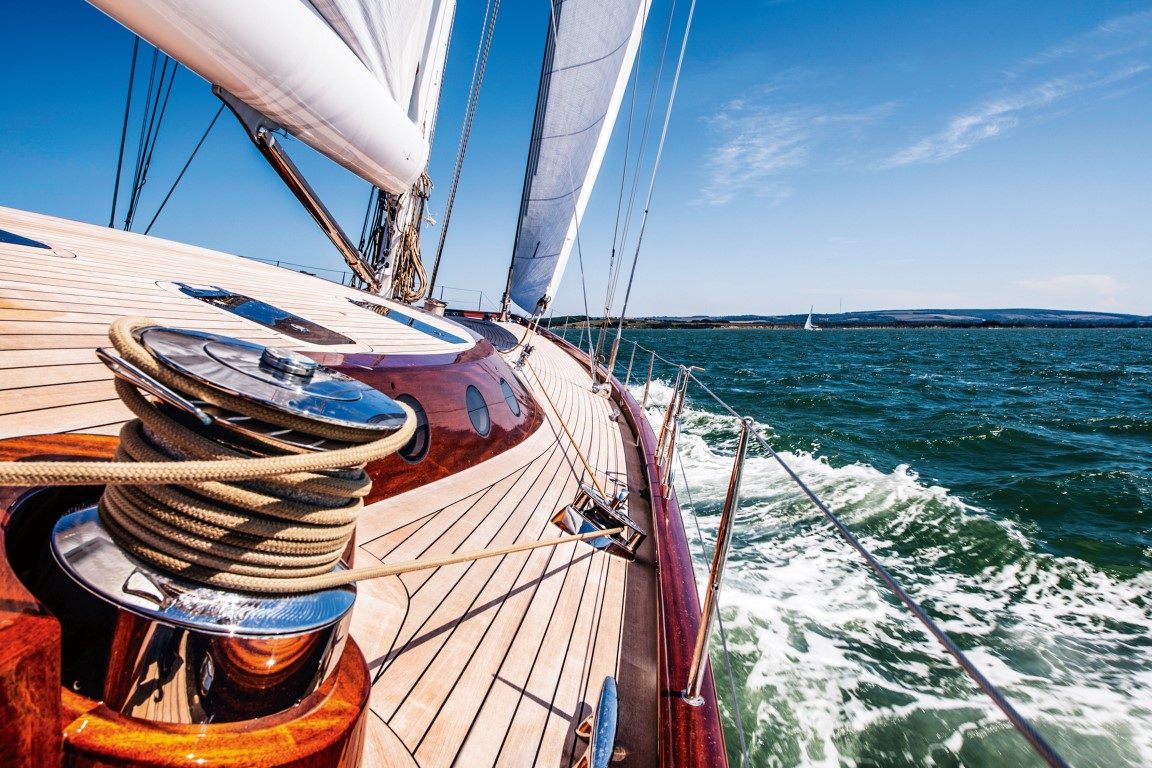 Sail handling has been carefully thought out, with a custom carbon rig. She is fractionally rigged as a Bermudan sloop, with all lines coming back to the cockpit, where a bevy of Lewmar hydraulics makes light of the work. So much so, in fact, that she can be sailed shorthanded (there are no crew berths below).

In some respects, this boat feels like a huge day-sailer. A high voltage motor from Torqeedo powers the Lewmar hydraulic system. A lightweight Vortex reservoir uses 90% less oil than standard, giving a 53% weight saving, and lessening the environmental impact of oil changes. A low-voltage Lewmar power pack serves as a back-up.

The heart of the electrical system is four BMW i3 batteries, totalling a huge 160kWh. They provide the power for the 100kW Torqeedo Deep Blue electric drive, which can push the boat at up to 10 knots.

Crucially, the Torqeedo drive also offers the ability to generate power from the flow of water past the propeller when under sail. This can churn out 3kW at 11 knots, with the owner reporting a hefty 6kW in breezier conditions near Oslo. So, in principle, the boat should be able to sail across the Atlantic without burning a drop of fuel, although there are twin 25kW DC generators on board, just in case. 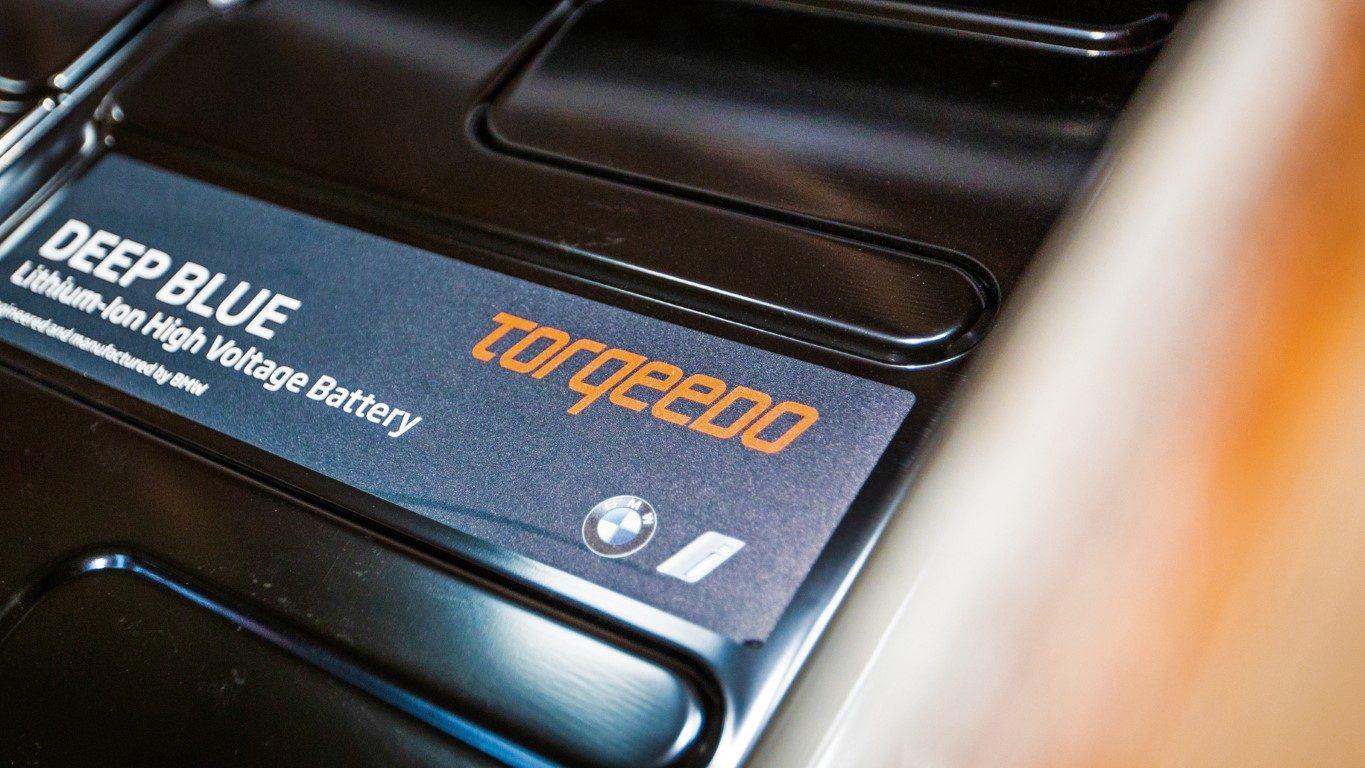 “We compared the project and its goals to a ‘Tesla of the seas’,” says the owner. “I enjoy being at anchor, in a tranquil bay, away from crowded marinas, so regeneration of the batteries was important to allow this selfsufficient way of living onboard. We have generators, but only as a back-up; I plan to enjoy her under power created from a day’s sailing.”

Power demand is so carefully managed by the efficient on-board systems that the boat can spend up to four days at anchor without switching on the generators. For instance, a 5kW Webasto water heater provides hot water only on demand using such effective insulation that there is almost zero loss in the storage and pipework.

There is air conditioning for the tropics, but here again, careful configuration means that the two Webasto coolers don’t require the generator to keep the boat cool overnight. And the fridges and freezers use Cryogel insulation. 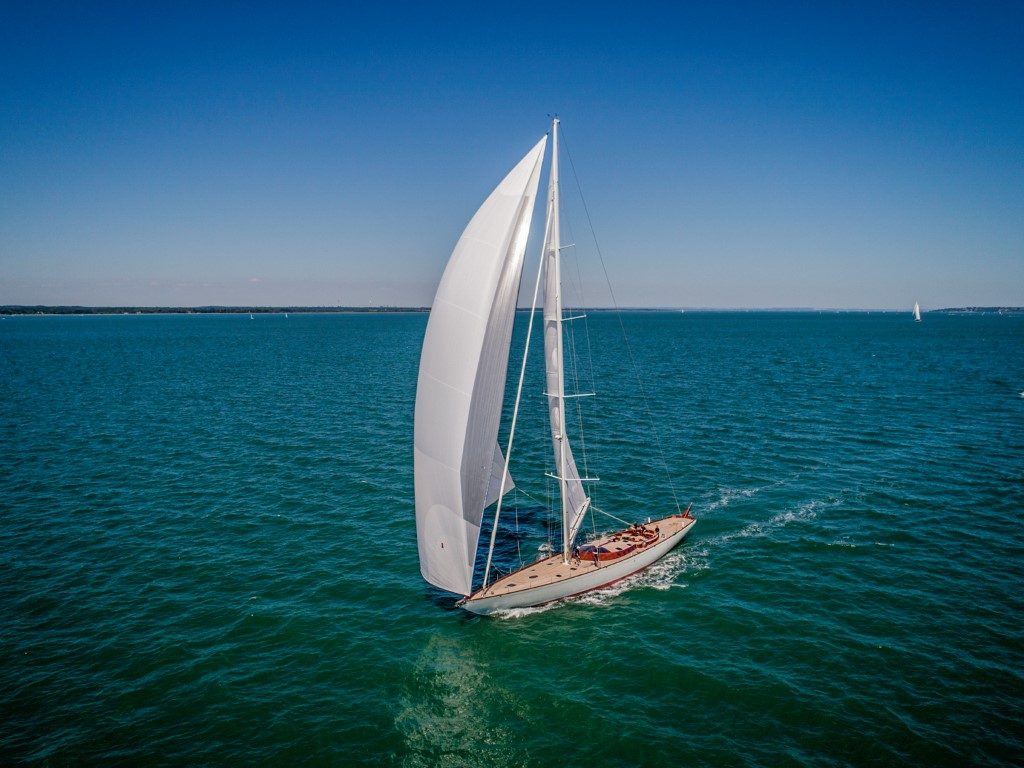 “By partnering with suppliers and challenging ourselves to create customised solutions using the latest energy-saving technology, we have created one of the world’s most sustainable superyachts,” says Stuart. “From construction, using responsibly sourced timber to carbon-saving systems while in operation, the Spirit 111 sets a new standard for reducing the impact sailing has on our environment.”

It is not an idle comparison to note that Geist is the largest single-masted wooden yacht to be built in the UK since the launch of the legendary J-Class Shamrock V in 1930. Not only does she embody the same classical looks but, like Shamrock, she is designed to be as fast as the technology of the day allows.