Tucked in a shed at Whangaparaoa’s Weiti Boat Club, the restoration of the 26-foot Nordic is nearing completion. The beautiful little double-ended cutter has served numerous owners since her launch in 1946 – few quite as colourful as the current incumbent. Words by Lawrence Schäffler, photography by Lawrence Schäffler and supplied.

Nordic belongs to 28-year-old Sam Harkin and it’s hard to avoid being swept up in his infectious enthusiasm as he caresses her stout hull and talks about her history.

He bought her about 18 months ago and, despite the half-century that separates their birthdays, there’s a sense that they were destined for each other – a marriage spawned among the stars. The man and his boat are both free spirits, happily unshackled from the staccato rhythms of 21st century life. 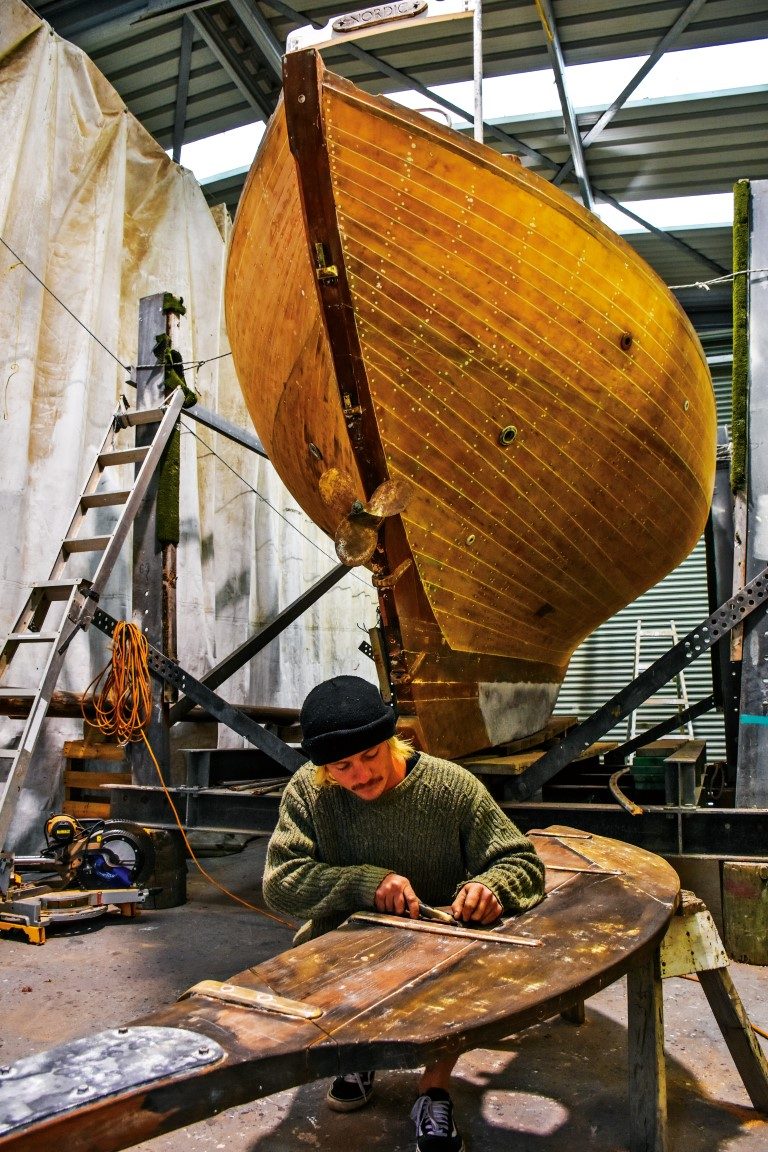 Nordic is a simple yacht – in the nicest possible sense. Solidly-built, her hull comprises 1¼” kauri planking over oak frames with rough-sawn, pohutakawa knees. She still carries her original Oregon spars, though the gaff-rig’s been modified to Bermudan. An unknown, previous owner lopped 500mm off the end of the boom and screwed a track to the mast. Running backstays were also added.

Despite the advancing technology over the years her successive owners have all eschewed modernity. The inventory is fairly rudimentary – there aren’t any winches or jammers, only blocks and hardwood cleats. There isn’t a toilet and the cosy interior is illuminated by a kerosene lamp.

She’s powered by an air-cooled, 8.5hp twin-cylinder Lister diesel with a heavy flywheel – it’s started with a hand crank. The canoe stern, bowsprit and club-footed staysail epitomise the designs of her era. She instantly reminds you of those pioneering vessels that captured the public’s imagination in the round-the-world voyages of the 40s and 50s. Boats and sailors that reeked of adventure. 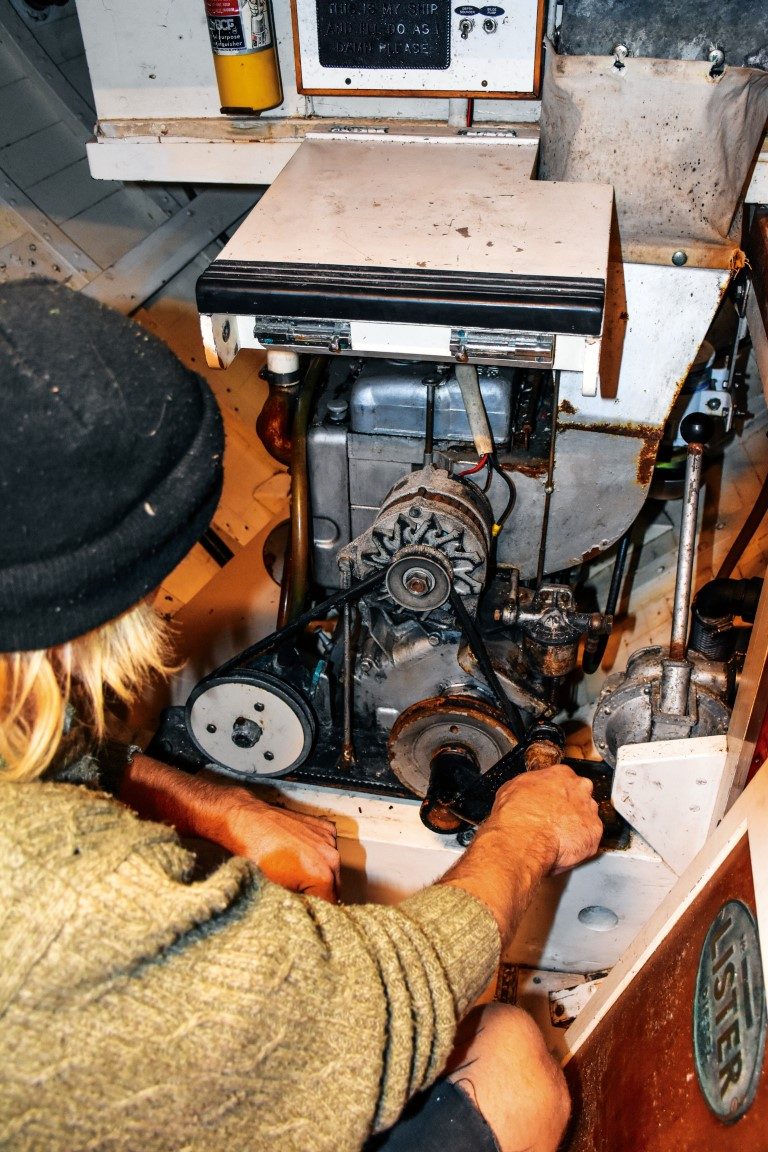 And that’s the way Harkin likes it. His is a similarly uncomplicated life. Together with girlfriend Jen he’s tackling Nordic’s restoration himself, living aboard while doing it, the living space surrounded by hammers, chisels and power tools – the usual arsenal that marks the life of a committed DIYer. He works three-days-a-week at Auckland’s Maritime Museum – as a shipwright – to fund the Nordic project.

When it’s done (and he’s saved enough money) he plans to take off cruising – you get the sense that though the destination hasn’t yet been identified it isn’t really important. A modernday Johnny Wray.

But let’s travel back to Nordic’s birth. 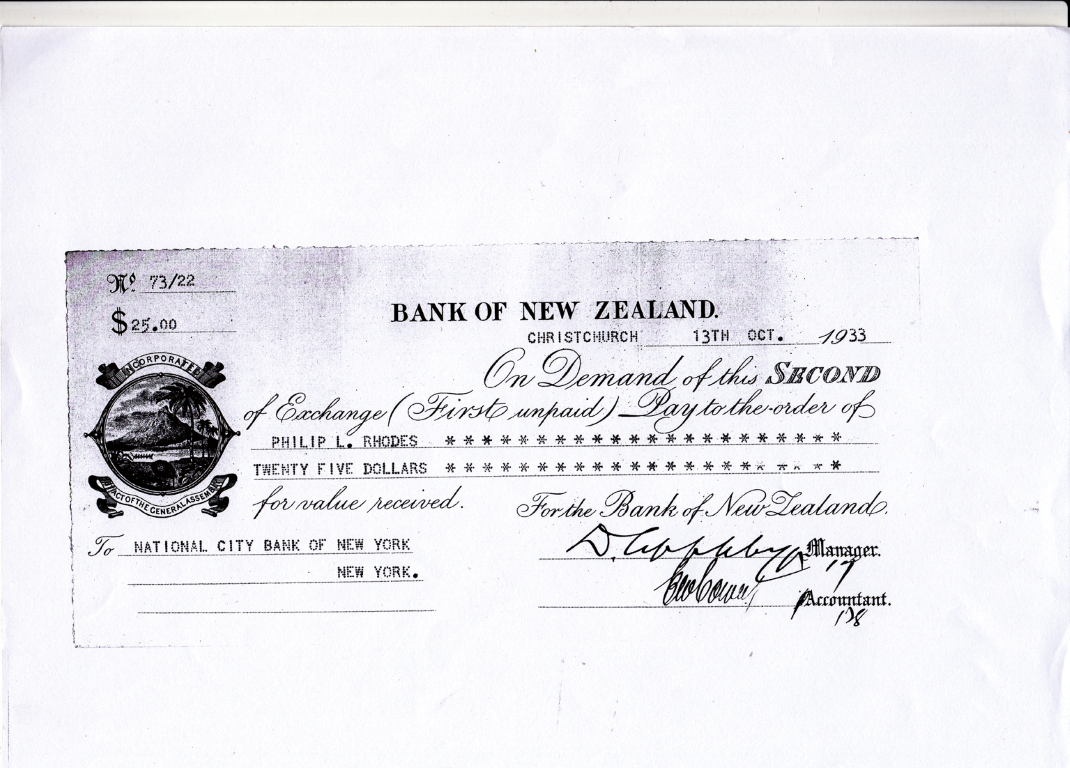 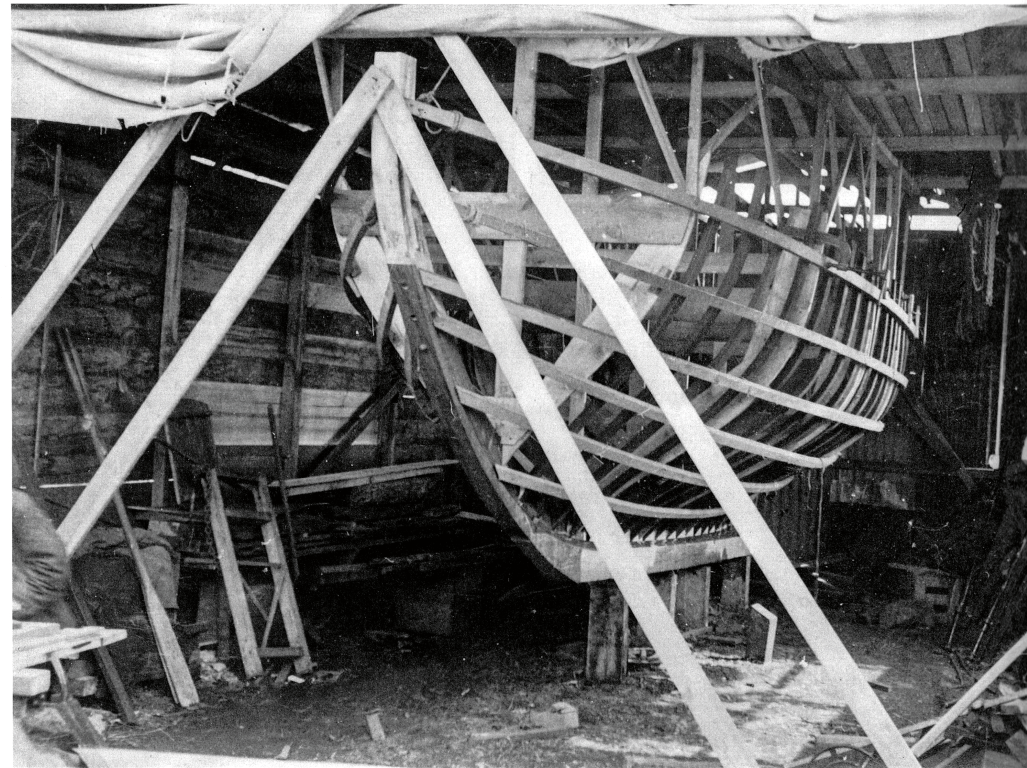 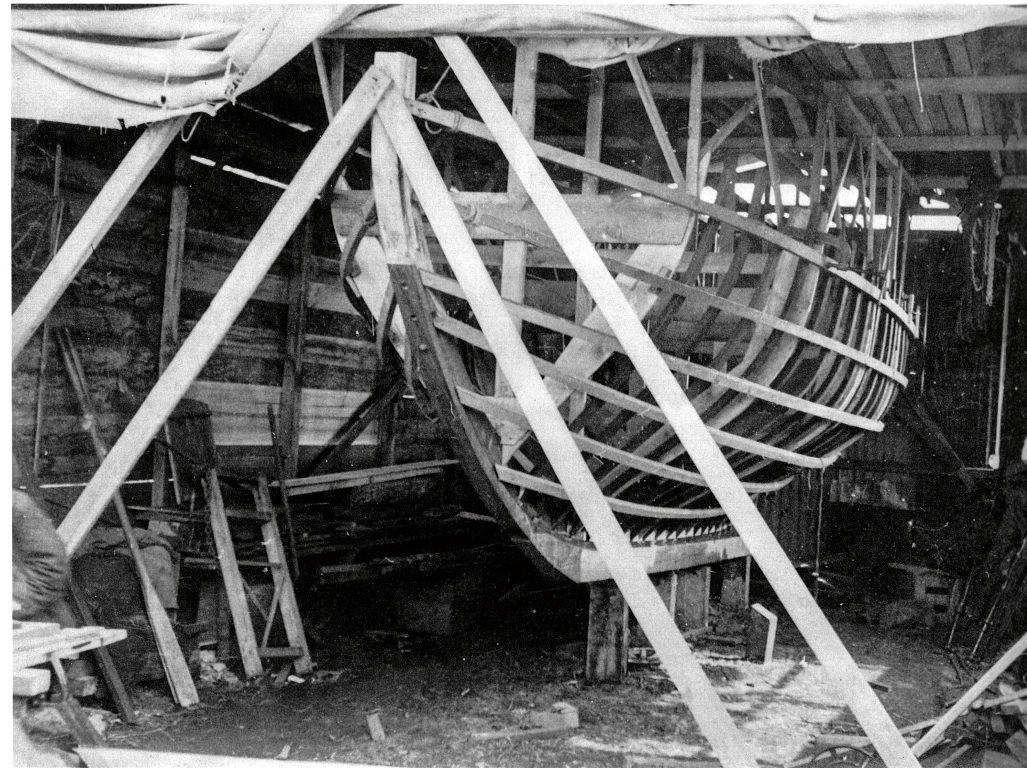 She’s from the drawing board of American Philip Leonard Rhodes (1895–1974), a prolific and versatile designer whose work ranged across superyachts, dinghies, hydrofoil racers and launches. His clients included the Rockefellers and Sears and Roebuck.

He designed the 12-metre Weatherly which won the America’s Cup in 1962. He’s widely regarded as one of the pioneers of fibreglass construction. His Bounty II (for Coleman Plastics in 1956) established the viability of the new material for larger production boats.

Nordic is believed to be his only Caribe design in New Zealand. She was built in Christchurch by a M.W. Peek who bought the plans from Rhodes in 1933 (see the copy of his $25 cheque opposite). He started her around 1936 but the project was put on hold during WWll when he departed for Europe to serve in the Air Force. He took up the tools again on his return, finishing the boat in 1946/47.

Along with buying the boat, Harkin has received a treasure trove of archival documents which includes plenty of correspondence between Peek, the designer and various materials/equipment suppliers. None of it reveals Peek’s first name. 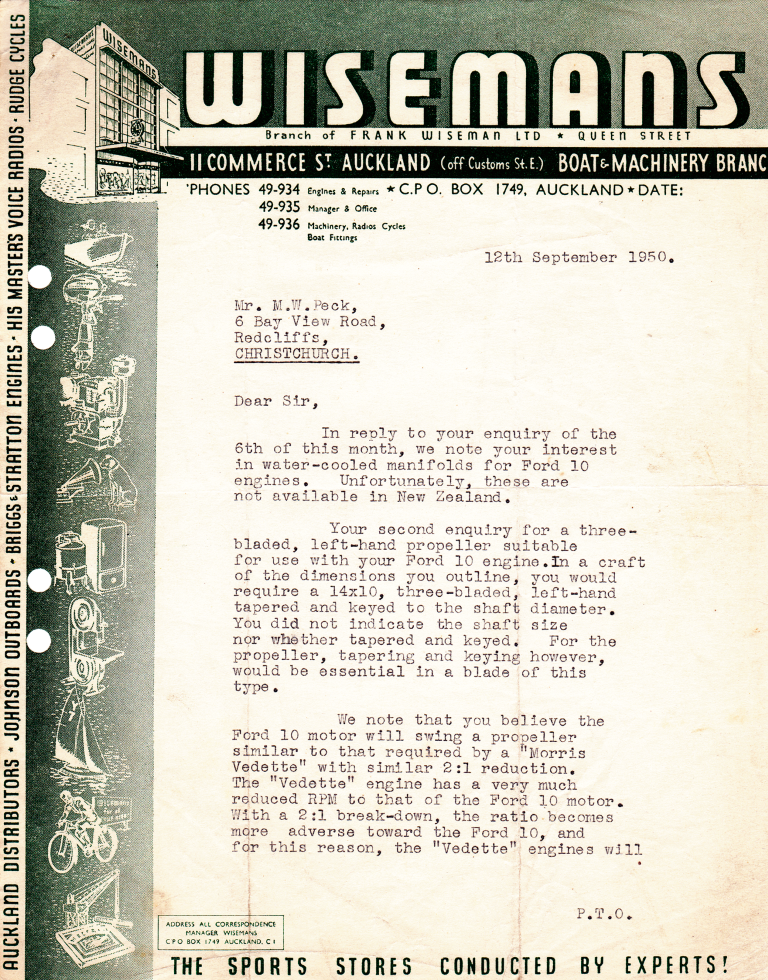 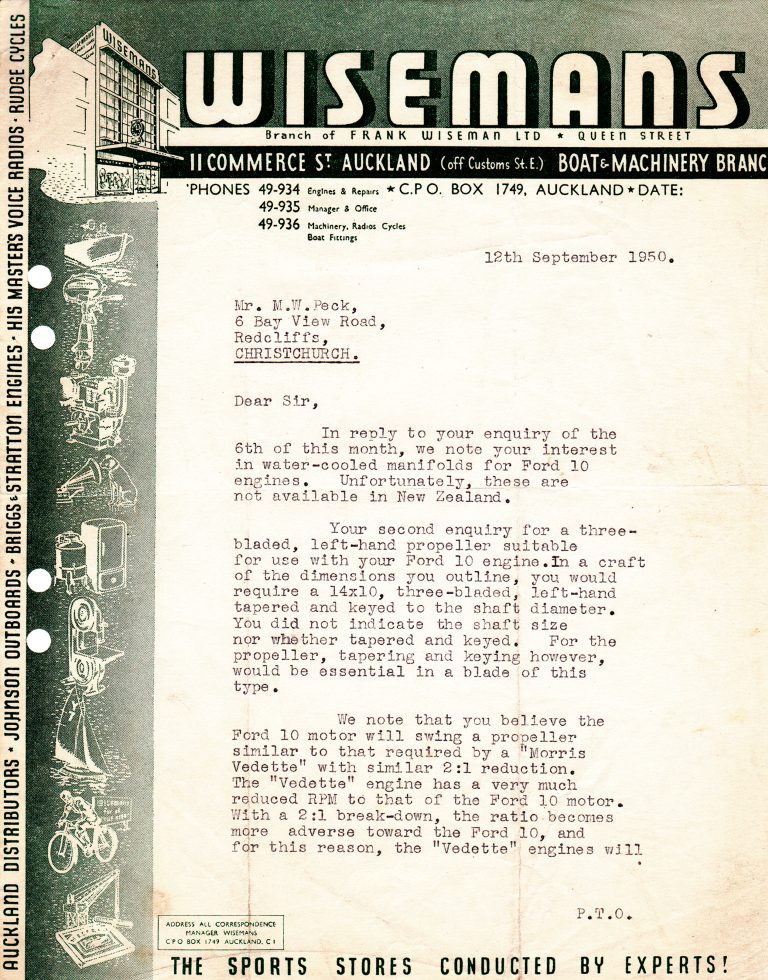 Though Peek doesn’t appear to have fitted Nordic with an engine initially, it seems he began investigating one in 1950. There’s ‘testy’ correspondence between him and the Wisemans company (in Auckland’s Commerce Street) concerning a suitable prop for a petrol-fired 10hp Ford. He also considers using a marinised version of the popular Morris ‘Vedette’ engine. Ford won.

It’s unclear how the Ford performed but around 1963 it was ditched in favour of the Lister diesel – which is still going strong. Harkin says it’s slow-revving (800–1,000rpm cruising) but bullet-proof and doesn’t “miss a beat.” Though the Lister longevity is legendary, there’s a receipt from Christchurch’s Bonner Engineering (October ’94) for a ring and gasket set. The diesel has enjoyed at least one rebuild. 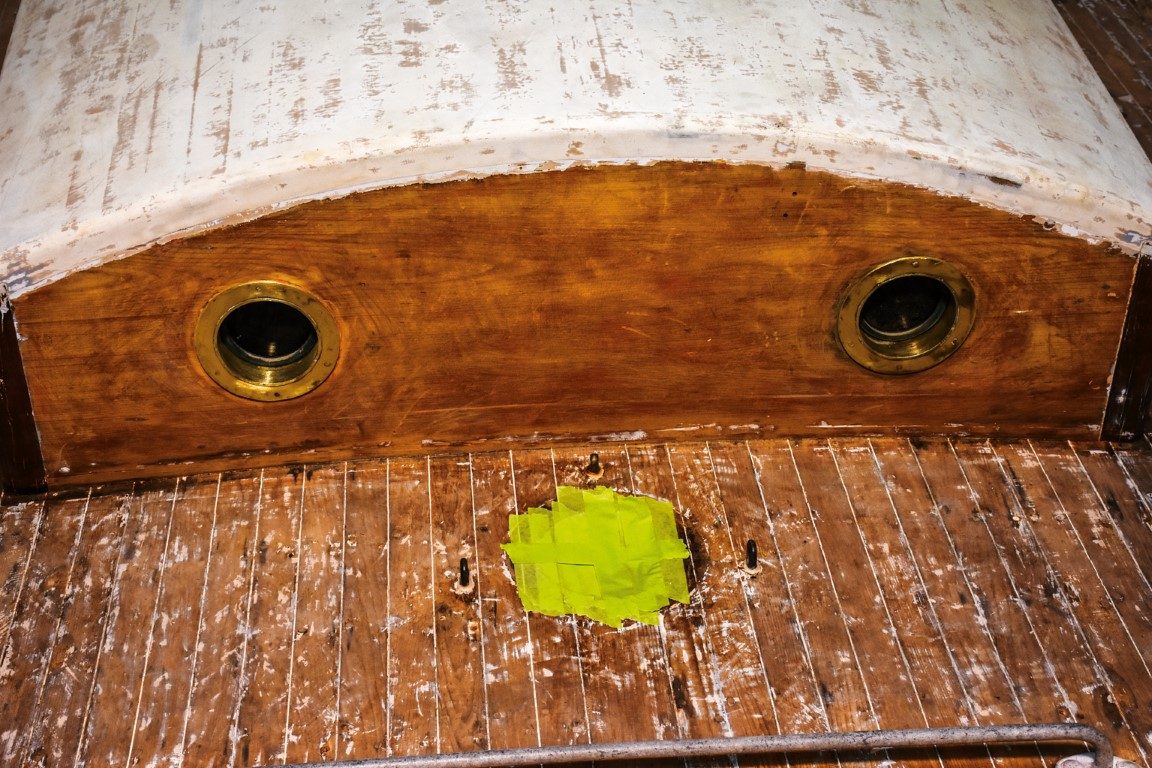 Nordic’s history and the procession of ownership over the half-century following her launching is a little confusing, but she suffered her share of calamities. Boating New Zealand’s maritime historian Harold Kidd uncovered a reference to her being blown ashore in a gale somewhere along the North Island’s east coast. Another entry refers to carbon monoxide poisoning in which a child died.

Stripping away the paint, says Harkin, revealed evidence of a further mishap. Only the starboard side is caulked. Most of the port side was replanked (edge-glued kauri) following a ramming in Lyttleton Marina (date unknown). But the hull is remarkably sound. In fact, the only bit of rot

When Harkin found her, Nordic was lying in Ohiwa Harbour, near Whakatane in a sorry state. The growth on her hull resembled a reef – nestled among the vegetation was a thriving colony of paddle crabs and plenty of “fat, delicious green-lipped mussels.”

Buying her was happy rebound off a 36-foot steel yacht Harkin and his brother had bought. It didn’t end well. But as Fate would decree, he had saved $1,500 – exactly the amount needed for a deposit on Nordic. That the little cutter would become a perfect companion for a life of adventure was obvious almost immediately.

“With my brother as crew we sailed her from Ohiwa to Auckland,” says Harkin. “We had to buy a bunch of polypropylene to re-run halyards – and it wasn’t an auspicious start. We ran aground (twice) leaving – because of the poorlymarked channel. Other than the compass and a large chart of New Zealand she didn’t have any navigational equipment. So we used a hand-held GPS – and relied a lot on dead-reckoning. With the thick undergrowth on the hull we often motor-sailed to get ahead. But it was a fun voyage. I fell in love straight away.” 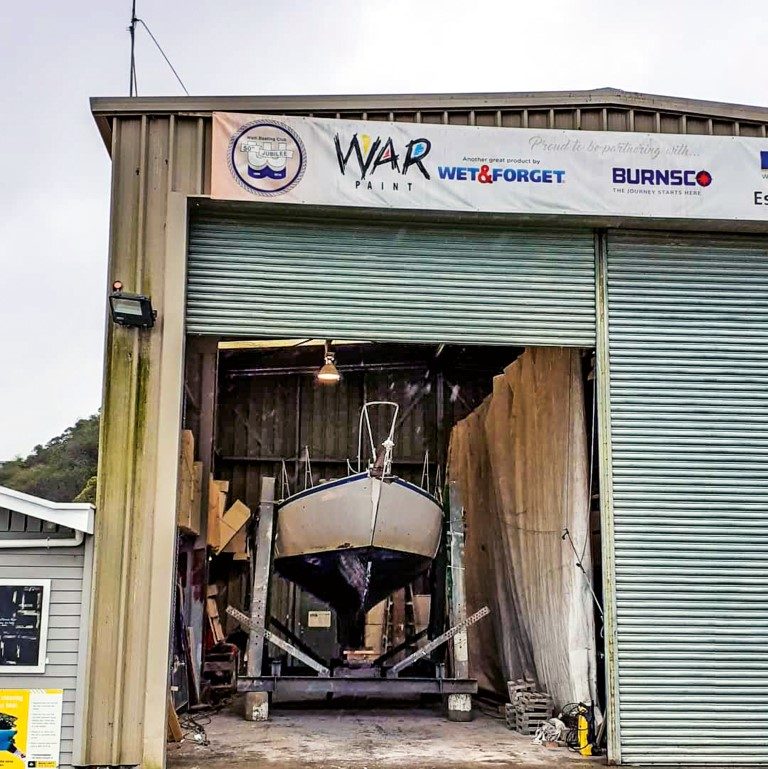 Having delivered the boat successfully the hull was cleaned and Harkin discovered that Nordic does, in fact, sail really well. “The best speed I’ve got out of her is 11.2 knots on the GPS – mind you it was blowing 30 knots, running to Great Barrier Island on New Year’s Eve, carrying a reef in the main, the #2 jib and the staysail.”

He and Nordic also participated “unofficially” in last year’s Coastal Classic, completing the course in 21 hours. She is, he says, a beautifully-balanced lady and happily goes about her business with little persuasion needed from the tiller. The record for unattended-tiller sailing is one hour – a feat she’s accomplished twice.

The little cutter’s scheduled to return to the water at the end of August after her refurbishment. It’s been an intensive project – but it’s turned up a few unexpected treasures. “I found an ancient pair of Aviator sunnies under the floorboards – I don’t know if they belonged to Mr Peek but he was a pilot during the war, so I like to think they were his. I also found an old primus burner.” 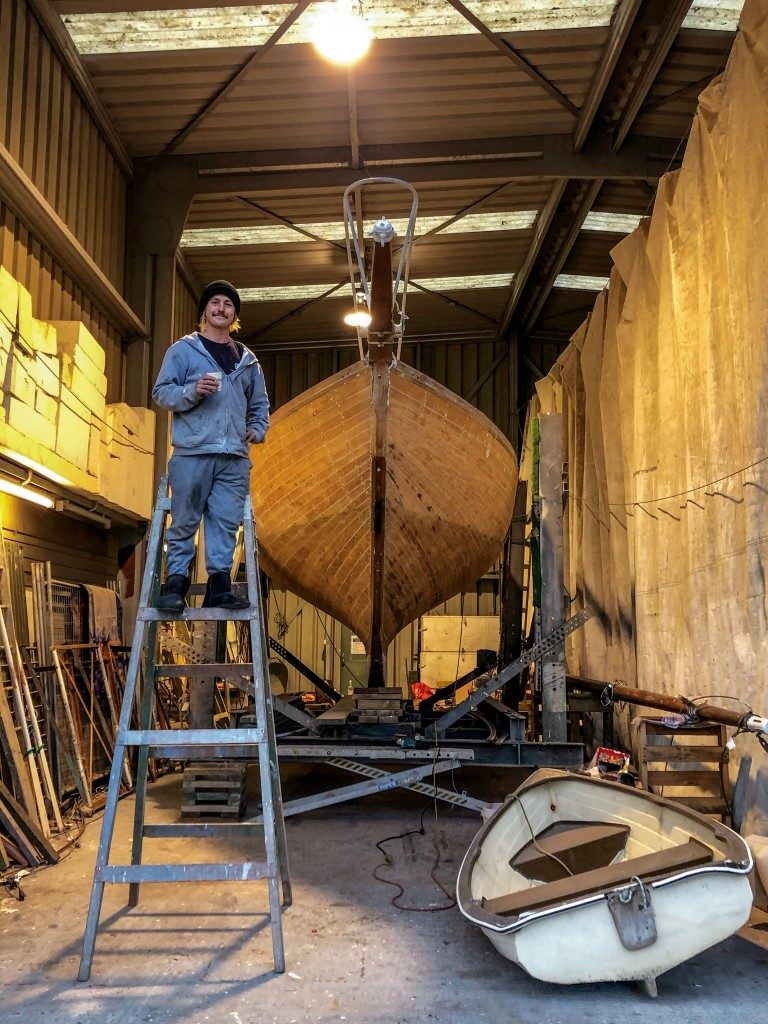 Harkin’s a chippie by trade but his current role at the Maritime Museum involves replacing the deck timbers on the old Ted Ashby scow.

He says he is eternally grateful to the people who’ve helped with Nordic’s rebirth. First and foremost is Jen (despite the grime and grind that goes with DIY rebuilds she’s a great source of encouragement when things get rough). His Mum – who provides the odd meal and also tucks into sanding. Bruce Gentry (operations manager at the Maritime Museum) who kindly drove him and his brother to Ohiwa to collect Nordic and never once lectured them about life and its attendant responsibilities. 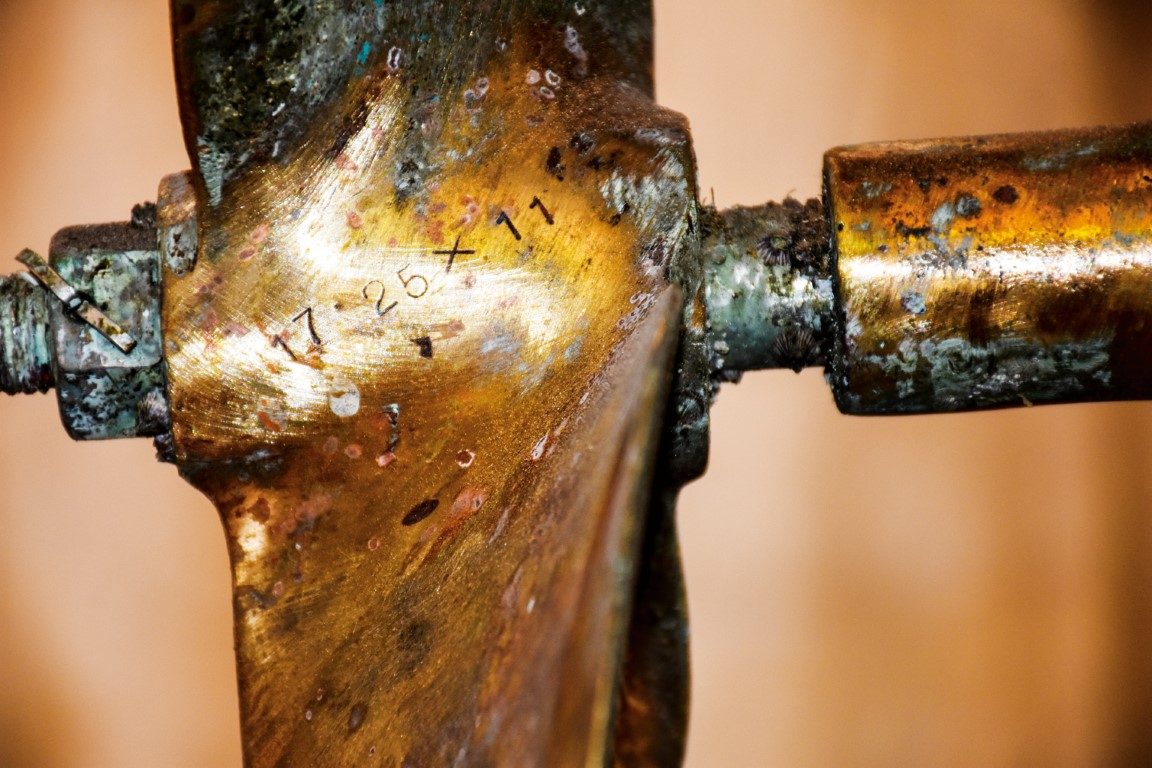 Most importantly, though, local boatbuilder Paul Tucker who not only offered sage advice throughout the project but also allowed Harkin to use his workshop and machinery and borrow tools.

Look out for Nordic on the Hauraki Gulf – she’s a beauty.