Coromandel seaman, Jim Morgan, just can’t help himself. “She was just too good a boat to sink on the mooring,” he says of his latest acquisition, the little wooden workboat Lisa Rose. Story by Lindsay Wright.

“She arrived here at Whangapoua Inlet and the people stuck her on a mooring, then disappeared.” After he’d saved her from sinking two or three times, Jim tracked down the owner. “He wasn’t interested in the boat – he just wanted to get rid of her – I was getting sick of pumping her out – but she was too good to let her sink.”

“How much do you want for her?” he asked the owner. “Aahh, three bottles of rum,” was the reply. “Which is why the locals call her the rum boat.” He can’t remember if it was Captain Morgan – or some lesser breed of libation, but the deal was done and Jim added another boat to his armada. 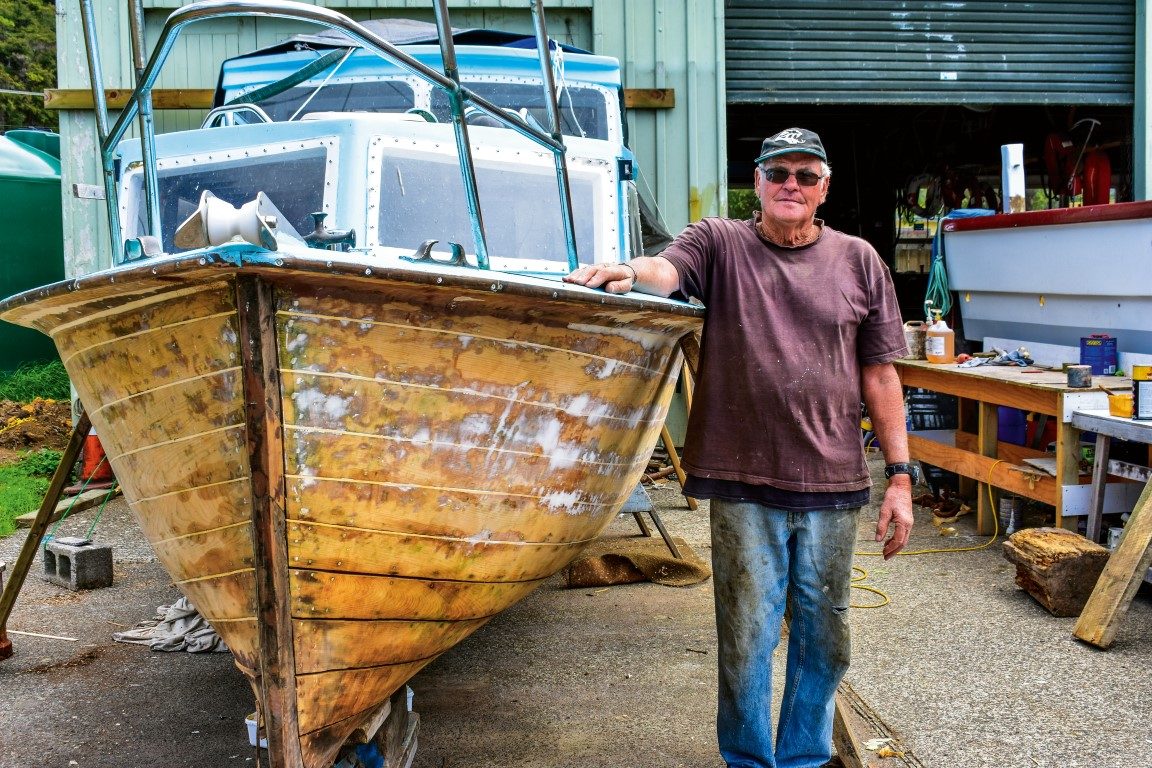 That was a year or so ago and since then the 1980 40hp fourcylinder Isuzu diesel has been removed and reconditioned and is awaiting re-installation. The stern section of the shapely 6.70m kauri hull has been rebuilt and the hull planking splined with yellow Alaskan cedar – supervised by boatbuilder Terry Taylor.

“She’s mostly full length kauri planking,” says Taylor. “She was built by C.E. Thompson Boatbuilders and Motor Engineers in Dargaville, around 1940.” A bronze builder’s plaque fastened inside confirms her origins.

Her ¾” (19mm) hull planking is copper-riveted to hardwood frames. The rotted foredeck has been replaced with 6mm plywood and kauri used to replace the planking aft. Several broken frames have been ‘sistered’ (ie; sections of wood fastened beside them for extra strength). 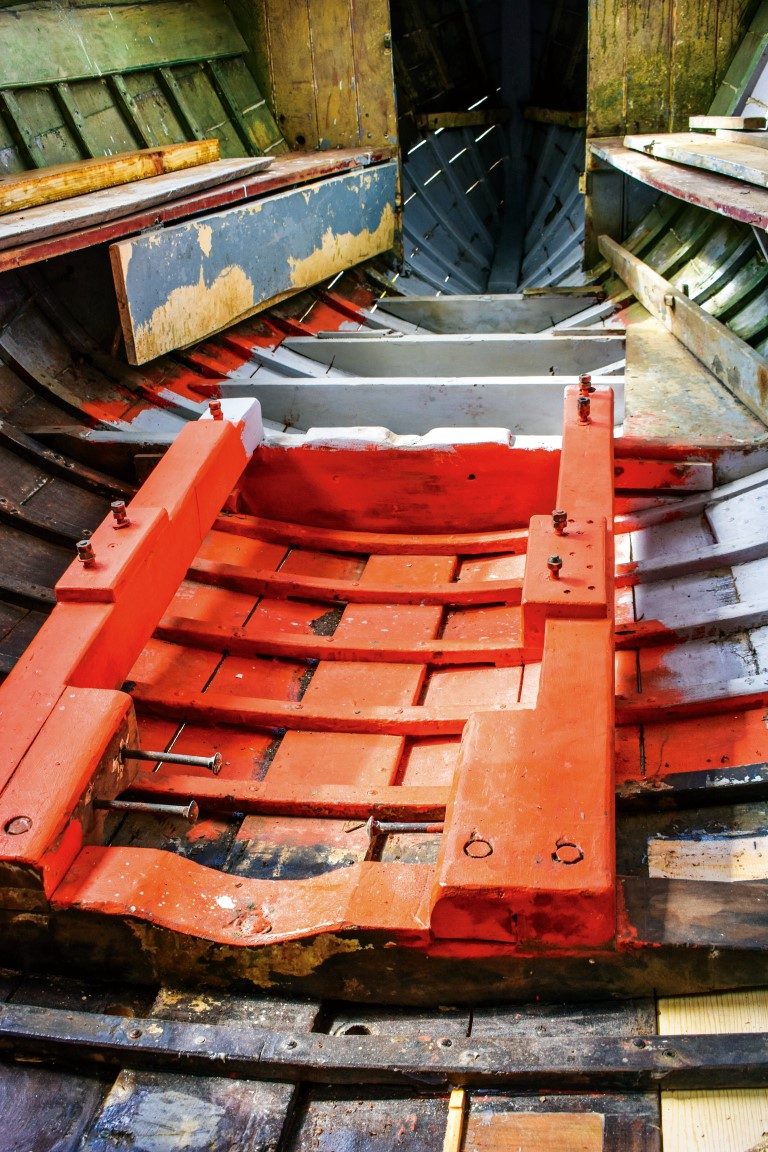 Lisa Rose’s Dargaville builders were also commissioned to build two of the boats Sir Ernest Shackleton took to Antarctica as part of the 1914 Endurance expedition: Dudley Docker and Stancomb Wills. After the Endurance was crushed in heavy pack ice the two boats and one other, James Caird, were dragged across pack ice, launched and sailed 800km to Elephant Island.

Shackleton wrote to the builders, Erik Thompson and his son, Charles: “In regard to the boats, it will interest you to know that they gave every satisfaction under trying conditions in the Antarctic. You should be proud of them.”

The same builders were commissioned to build a doubleended boat for Douglas Mawson’s 1911 Australasian Antarctic Expedition and two more to the same design were built for Captain Robert Scott’s fatal 1911–1912 Terra Nova expedition.

But Lisa Rose settled for a much less glamorous role, towing rafts of kauri logs and general tugboat work around Hokianga Harbour. “I don’t know much about her history before she came to Whangapoua,” says Jim. “She was obviously well built but had fallen on hard times and unsympathetic ownership.”

In a career spanning years of commercial fishing and boat work around the coast, he reels off a list of vessels he has owned that quickly outstrips my rusty shorthand. Clio, Dawn, Messina Ann, Cray Hunter, Joint Venture, to name a few. But right now, he’s down to four.

Number one is his nuggety carvel-planked motorsailer, Big Spree which the Morgans have owned since 1997. The statistics roll rapid-fire off his tongue. 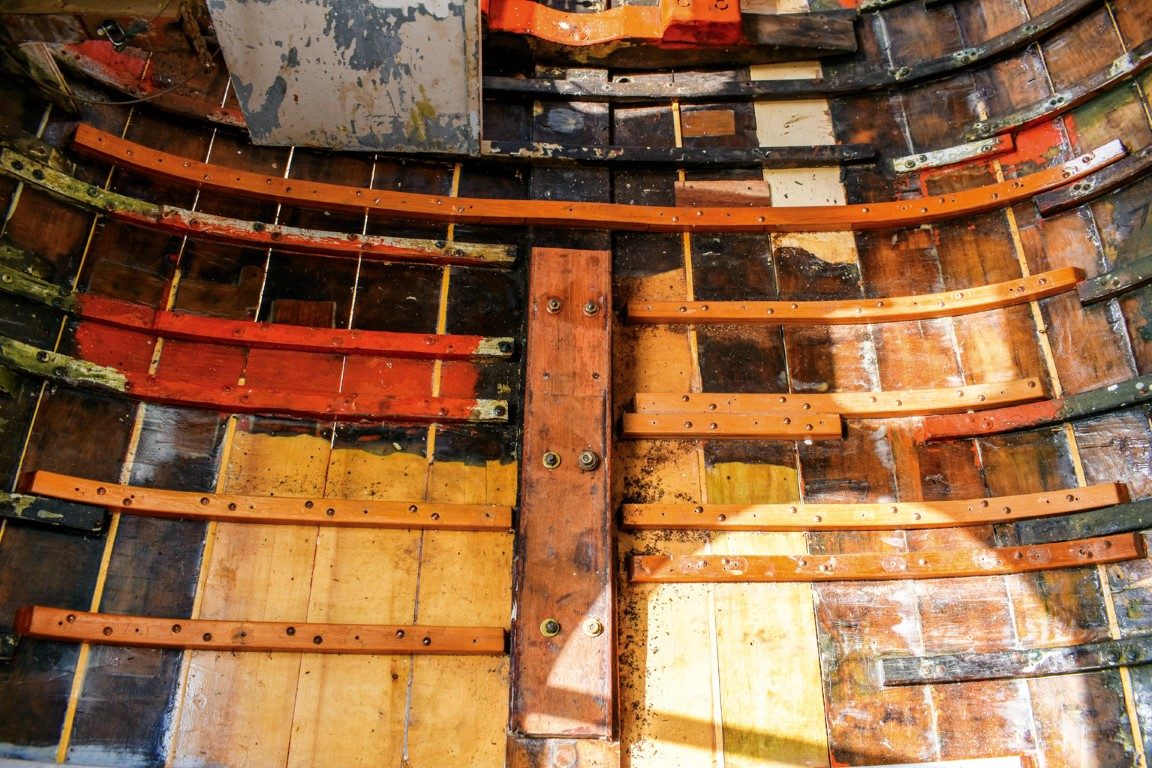 The relatively shallow draught helps Jim and his wife Gail with crossing the bar at Whangapoua Inlet, the shallow port sheltered behind a sprag of land that sticks out from the Coromandel Peninsula north of Whitianga, and which has been their home for the last 35 years.

Some coastal cruising people and others in the know drop in to talk boats and see what he’s up to. “I sometimes get called to guide people over the bar – I stand on the beach with a handheld VHF and pilot ‘em in,” he says. “It’s pretty good with these big tides – we had two metres under us when we came over this morning – but it can get gnarly.”

An 80hp 6LXB Gardner drives through Big Spree’s 3:1 Twin Disc gearbox, providing eight knots cruising speed for the 25-tonne motorsailer. It takes fuel from two 1500-litre tanks. The engine room bilge is as clean as the proverbial dining room. “We use her just about every week,” he adds. 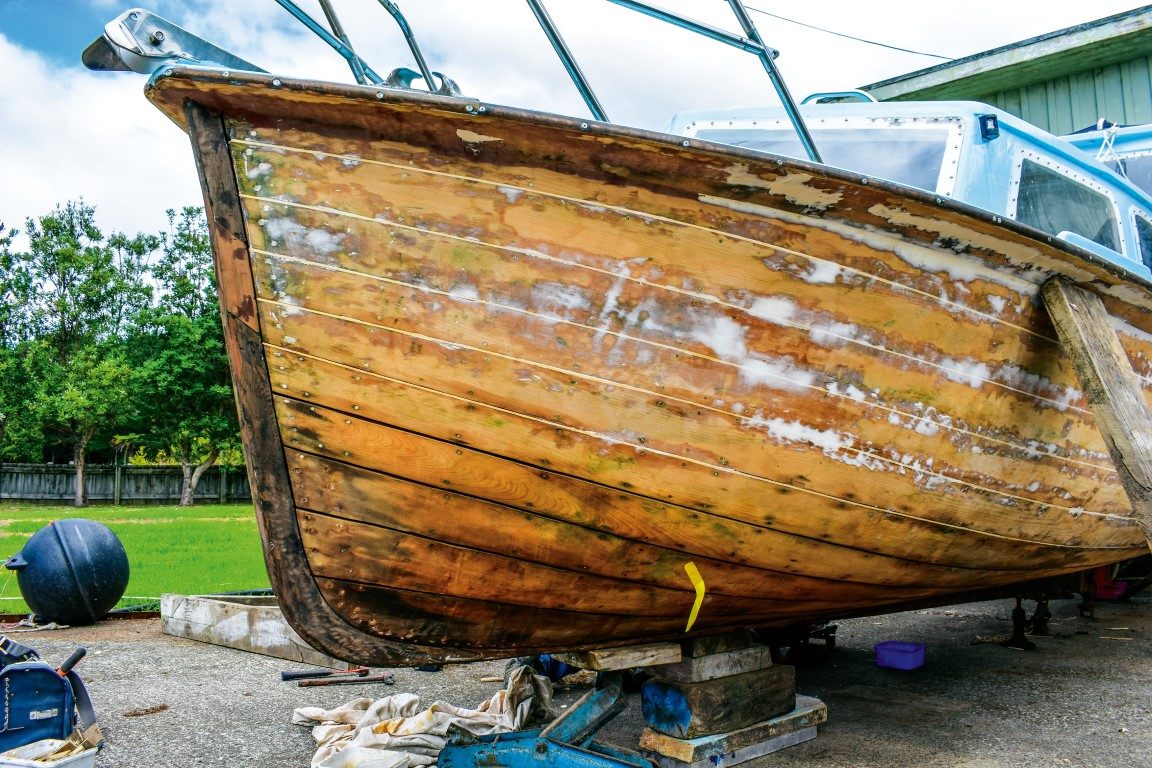 Big Spree has the warm ambience of a boat well used and well loved. Rigging and engineering are heavy-duty commercial fittings, quality electronics and machinery – all well used and maintained. “It doesn’t pay to cut corners with gear,” he explains. “It’ll just crap out when you need it most.”

But the Morgans haven’t always had a heap of horsepower at the end of their boats’ control levers. In 2005 they bought a Cape Dory 32 – an American fibreglass production yacht – and spent a winter cruising the Pacific Islands. “But I’m not a yachtie,” he admits, “I just didn’t like it.”

The rest of his fleet includes a 9.2m solid fibreglass Japanese coastal fishing boat powered by a 135hp turbocharged Yanmar diesel through a sternleg. “Great little seaboat – just about the best I’ve had,” he says. “She’ll do over 30 knots.”

A Pinkney skiff rounds out his boat collection. “There was four of them built – good little boat.”

I suspect that when it comes to boats, he’s rarely seen a bad one.

THE SPANISH FLU OF 1918 Lest we forget