Towards the end of the boreal summer, North America’s Northwest Pacific Region is inundated with classic boat enthusiasts. Of all the events scheduled in that corner of the world, the most celebrated is the Port Townsend Wooden Boat Festival, this year in its 43rd edition. Story and pictures by Bruno Cianci.

The official boat-count was 144 but reducing the Port Townsend Wooden Boat Festival to statistics – albeit significant ones – wouldn’t do justice to the event.

What best captures the essence of this gathering is not the number of boats, but rather those that are part of the ‘natural’ environment of this unique maritime centre – a region that was once, before the 1929 Great Depression – a thriving commercial hub.

Organised by the Northwest Maritime Centre, a non-profit organisation established in 1978, this is a typical maritime event of Anglo-Saxon culture – convivial and friendly, and one also contrasting with the European ones that, by definition, focus on exclusivity rather than inclusiveness.

The event is the most important of its kind on the west coast, and is a brisk succession of meetings, seminars, demonstrations, boatbuilding contests and the like. And the surrounding area usually offers pleasant sailing, although this year the last night and final day were characterised by heavy rain.

The city of Seattle, reachable to the south through the famous Puget Sound, is just 40 nautical miles away; Victoria, the most important city on Vancouver Island (and home to a festival that takes place over the weekend before Labour Day), is located just across the Strait of Juan de Fuca, 35 nautical miles northwest of Port Townsend; while Vancouver is located 90 miles to the north.

At the festival we had the opportunity to sail in an Ericson 38 with Brandt Faatz, the executive director of the Centre for Wooden Boats, Seattle’s most beloved maritime heritage organisation.

Under the rain, wrapped in our oilskins, we sought advice on the best periods to sail in the Puget Sound: “Summer is less windy than other seasons, but warmer,” says Faatz. “August has the least wind and the most fog, but it’s nice and hot. September, the month of the Festival, is perhaps the best month, with good wind and quite a few warm days. 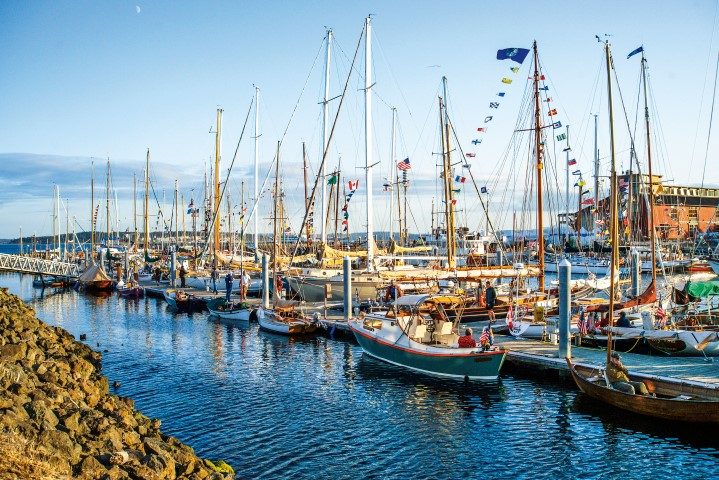 “Winter is cool and rainy but has many days with a fresh breeze and great sailing. In the past I’ve had great weekend cruises in December, when there’s frost on the deck and it’s cozy in the cabin. In winter, though, we can have gales of up to 45 knots, or even more.”

The celebrated yacht designer Sam Devlin managed to miss only the inaugural edition of the festival (1977), which took place a year before the Northwest Maritime Centre was established. Thereafter the event became the most indispensable showcase for his motor and sail boats (ranging from 8 to 62 feet), stubbornly made with the technique that made him famous: stitch-and-glue. 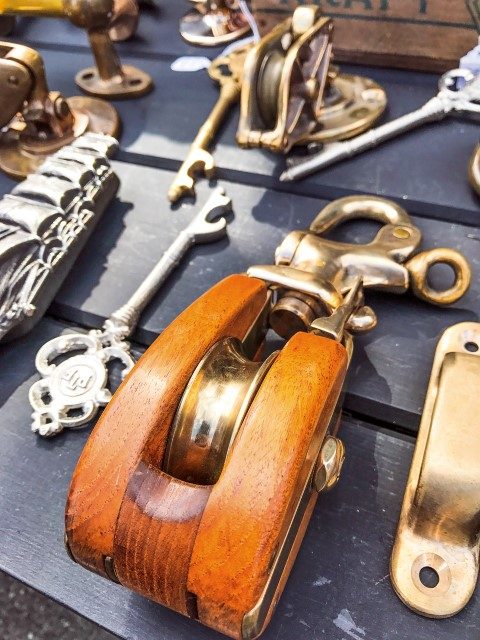 He didn’t invent it, as the Mirror dinghy was already made in the same way over a decade before Sam built the tiny Egret (15 ft). Instead, Sam should be credited for being the one-andonly who managed to build much larger boats with this fast and affordable technique.

When he received us aboard his Josephine, a 1934 salmon troller converted to a cruiser, he pointed out that – at least theoretically – the stitch-and-glue technique could enable him to build craft of up to 150 feet, ten times longer than his first, famous creation. As of today, none of the 438 boats he has built approaches that size, but should the right customer pop-up, he would certainly not hesitate.

Another regular visitor to the event is Pete Langley, the owner of the legendary Port Townsend Foundry (PTF) and the brother of Patrick Langley, formerly a trusted sailor of ‘his majesty’ Dennis Conner.

During the Wooden Boat Festival, Pete Langley regularly leases ‘The Cottage’, a historic shed located within the harbour that hosts the event, in which he stores each night the artefacts he exhibits during the day: cleats, turnbuckles, handles, bells, plates, steering wheels and the like, all made of the most refined alloys.

In the event of a visit, the ‘fetishists’ of onboard hardware should take the opportunity to visit the foundry, located a few miles away, to see how and where these items of fine workmanship are manufactured.

The best way to see this hardware at work is to join the schooner Martha – a sort of ‘ambassador’ for PTF products. “I crew on Martha every chance I get,” says Langley, “and I enjoy working with the kids, adults and the sail training programme.

“I have raced in San Francisco and sailed down the coast to Morro Bay. I’ve also raced in San Diego, in the Great American Schooner Cup, as I had hardware on many of the vessels in that race, including the first pieces I had ever made as Port Townsend Foundry (after 1981), on the schooner Rose of Sharon.

“Indeed, Martha has a lot of our work on her including all her keel bolts, turnbuckles, Kranze irons, bow rollers, stanchions and more. Her owners support us and we are happy to repay by giving the best of what we can do.” 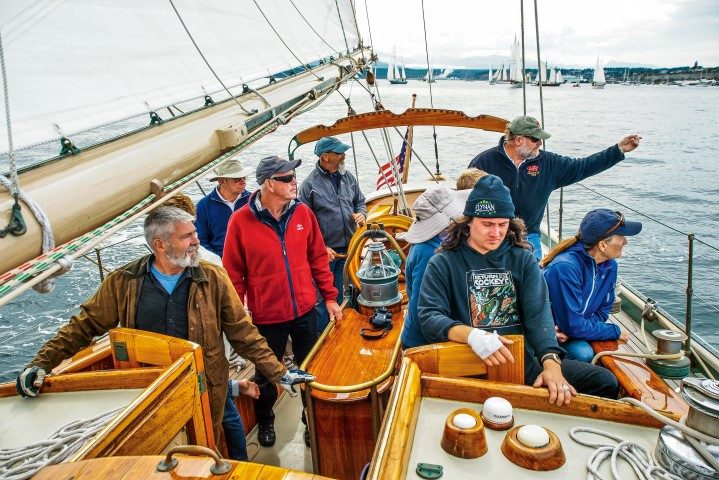 During my visit I had the privilege of sailing on Martha under the command of Robert d’Arcy, her charismatic skipper. For the record, the schooner was beaten by the more agile Sir Isaac (1984) – just 49 feet in length. Owned by Ann and John Bailey, who took 10 years to restore her, Sir Isaac lives in Port Townsend and is a natural recipient of the Schooner Cup offered every year by the festival organizers.

And then there were many other boats. The Lotus, a wooden motor vessel built in 1905 and normally moored in Seattle alongside the MOHAI (the Museum of History and Industry), was taken to Port Townsend where she provided affordable accommodation at the very centre of the show.

Next door was another habitual visitor: the working vessel Tordenskjold, a schooner built in Ballard (Seattle) in 1911. It fished the North Pacific and Bering Sea for halibut and other species, ending a 100-year career in 2012.

The boat was then retired and donated to Northwest Seaport, a non-profit organisation devoted to the preservation of maritime heritage and the development of educational programs. The Tordenskjold is still fully operational and serves as both an education platform and Northwest Seaport’s floating ambassador.

Another beautiful sight was the Blue Peter, a classic motor yacht, purpose-built for sightseeing in the local waters of the Pacific Northwest. Launched in 1928 from Lake Union in Seattle, she is 96 feet long and can carry up to 12 guests for day trips. She was named after the signal flag used aboard ships ready to depart for sea. 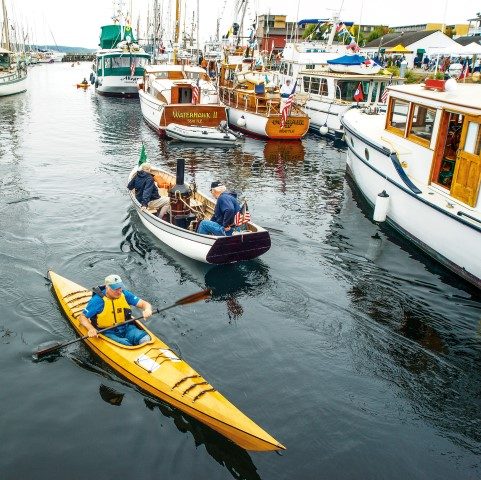 Along the same jetty were Merry Chase and Cape Ross, other habituées of the maritime gatherings of the region. The latter was built at Sterling Shipyards, in 1952, by the Canadian Fishing Company.

Originally, she fished salmon and herring along the entire coast of British Columbia; she was retired in 1999 and converted into a cruiser after a six-year refit. Built in 1929, the Merry Chase started her life under the ownership of Canadians of Japanese descent, but was seized under the War Measures Act in 1942.

During her career she served as a Naval Patrol Vessel and Calibration Vessel, and later as tender to Canadian naval units. Now, the boat is run by a charter company.

Standing out among the smaller craft was the sloop Felicity Ann. In this tiny boat the solo sailor Ann Davison completed the first female crossing of the Atlantic, between 1952 and early 1953. The sailboat was restored by the Northwest School of Wooden Boatbuilding, of Port Hadlock, and then transferred to the Community Boat Project.

On board was the young Viola, a charming volunteer, with whom we discussed the activities of the foundation that now owns the boat with educational purposes.

Scattered around the jetties are scores of kiosks and other facilities where exhibitors display their offerings – craft, tools, clothing, or books – as well as delicious street food. Good live music was performed until the early hours.

Being a port area, there are also fixed structures such as the large building located west of the harbour that houses, among others, Brion Toss Rigging. Jen Bates, a Canadian who’s been working there for some years, first came to the Port Townsend Wooden Boat Festival in 1997 with her parents. 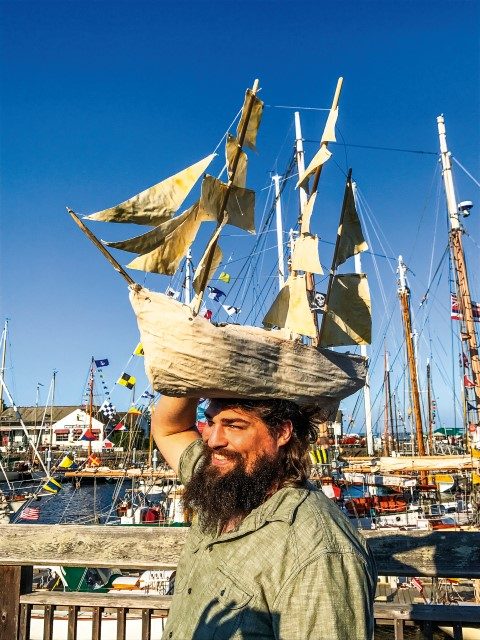 According to her, “there used to be more sailboats in the past, whereas now powerboats are more popular; besides, the festival is bigger than it was over 20 years ago. There is higher attendance and the booths are less marine-focused than they once were. Still, the festival is exciting and something to be proud of as a Port Townsend resident.”

Married to an American rigger, Jen has raised two kids – one named Chance – who sailed with us. He regularly crews on Martha. As his mum says: “He’s been lucky enough to have grown up in a town that has fully supported his passion and skills; he’s now deeply involved in youth regattas and in teaching youth sailing through the Northwest Maritime Centre.”

Its mission, as we later discovered, ‘is to engage and educate the people in traditional and contemporary maritime life, in a spirit of discovery.’ The centre also manages a campus that uses maritime experiences to educate, inspire people to adventure, and celebrate the related culture, in service of the local maritime community and industry.

Mostly it does this because, as stated on the organisation’s official website, ‘the sea is the most powerful teacher of all.’