Increasingly we live in a binary world: you are either this or you’re that; you are them or you’re us, but never in-between. Some boats, though, are in-between. Story and photos by Matt Vance.

In the powerboat world there has always seemed a great divide between the prop-spinning power boaties and the river-rat jet boaters. They eye each other suspiciously over this divide and out of earshot refer to each other as “saltwater dandies” and “skinny water bogans” respectively.
Much like K’ Road on a Saturday night, you occasionally come across something that is neither one nor the other, a delightful hybrid of ideas and in-betweens that is just crazy enough to work.
North Canterbury salmon fisherman Tony Tucker came across his version of a hybrid, not on K’ Road, but in an old 4.4m Wooldridge outboard jet boat that took a lot of finding. 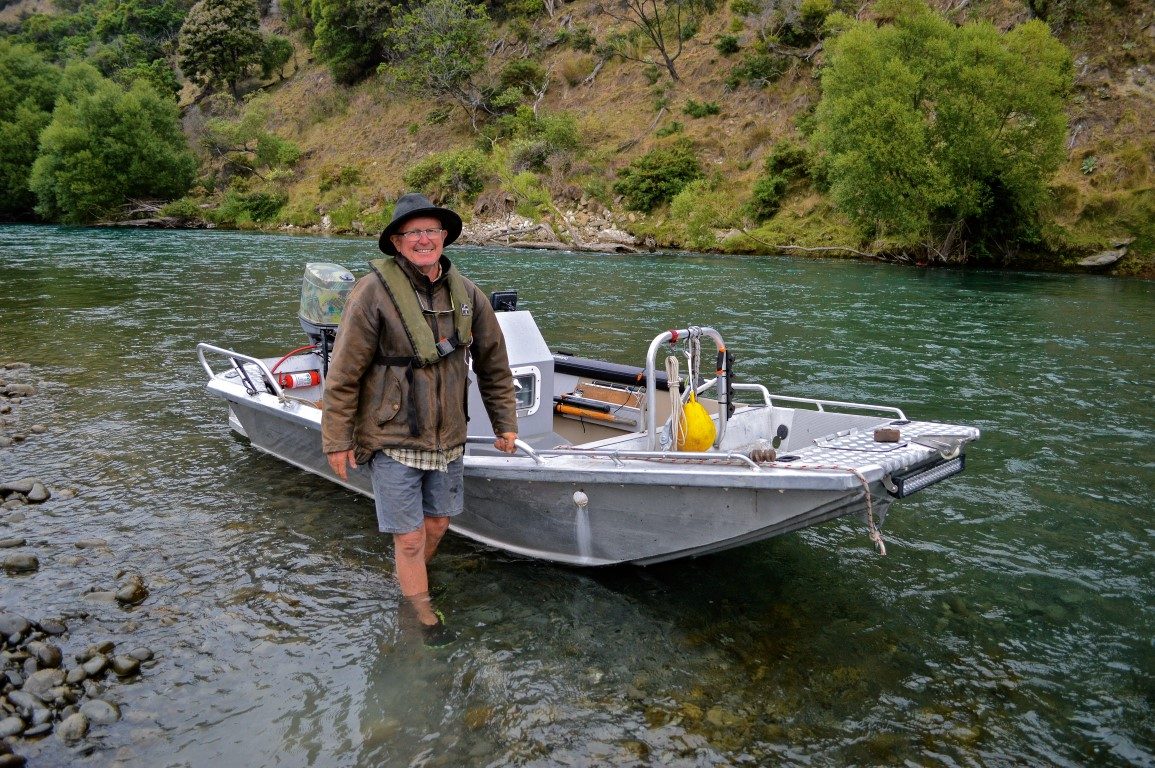 The Wooldridge family is famous in North America for constructing boats for the wild rivers of Oregon and Alaska. In the mid 1980s Lindsay Montgomery at Southbridge Engineering, just south of Christchurch, imported the Wooldridge templates as flat packs. He constructed just 33 hulls in total, aimed at the South Island’s braided rivers, and principally salmon fishermen keen on a light, open and sturdy riverboat.
Outboard jets are in a category with unicorns and cheap houses in Auckland and when mentioned in casual conversation usually elicit a blank, confused stare from the recipient.
They are the perfect hybrid, with the economy and ease of an outboard and the shallow water manoeuvrability of a jet boat. When you see one for the first time you say to yourself “Why didn’t I think of that?” or alternatively “What the hell is that?” 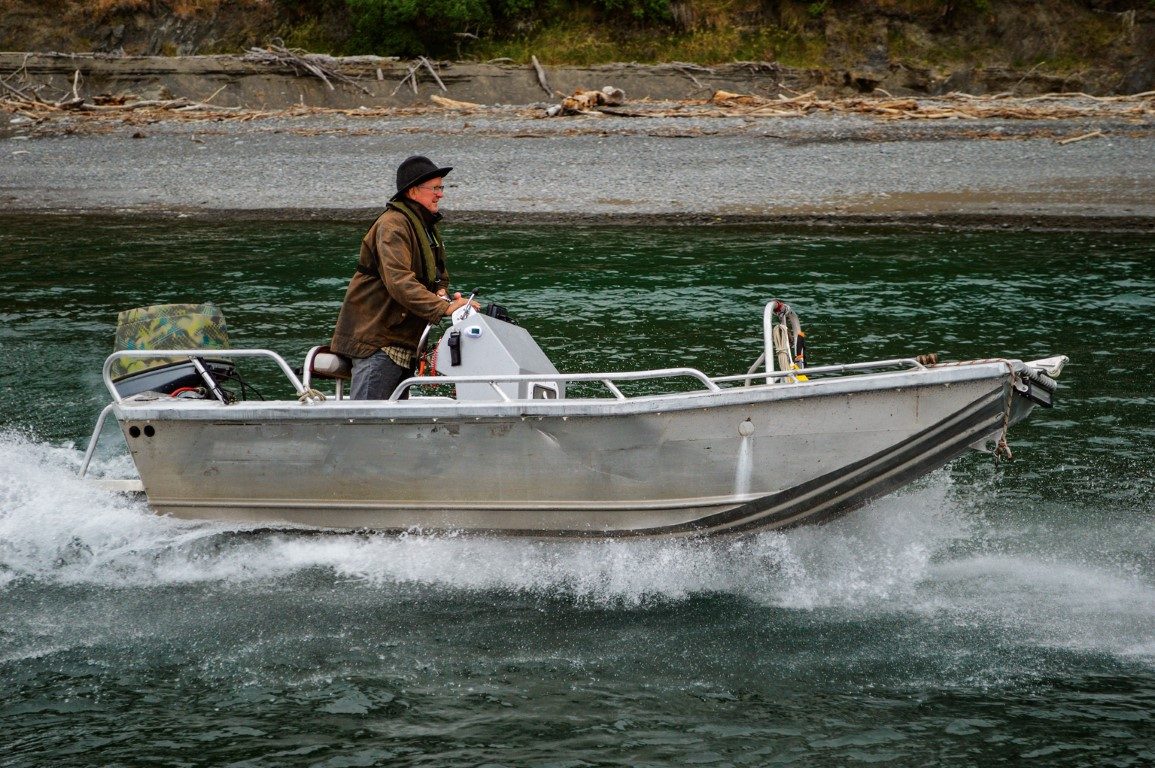 The engine on this Wooldridge is the original Yamaha 80hp two-stroke. It looks like any regular outboard until your eyes are arrested by the nautilus shell arrangement at the bottom where the prop should be below the cavitation plate.
It is a simple bolt-on job, yet it transforms the Yamaha into a skinny water jet. The only downside is you might lose up to 20% in horsepower, though the light and responsive hull means this is easily absorbed.
While most jet boats are inflicted with a big, heavy, gas-guzzling brute of an engine and their owners may sneer at your puny horsepower, they will be first to look the other way when you top up for gas or are dragging her off a shingle bank by yourself. They will also look the other way when you kick up the motor to floss the teeth of the intake grill after taking a mouthful of gravel.
When Tucker purchased her, the Wooldridge was a sorry sight. There was an odd, swept-back windscreen with side benches and not a lot of room to move. Its distinctive shape and the outboard jet were originally the property of local personality Steve Howie, of Kaikoura Marine, who used the boat for white baiting trips to Haast. Howie has since passed on, but Tucker notes the vessel is still referred to as “Steve’s boat” by the locals. 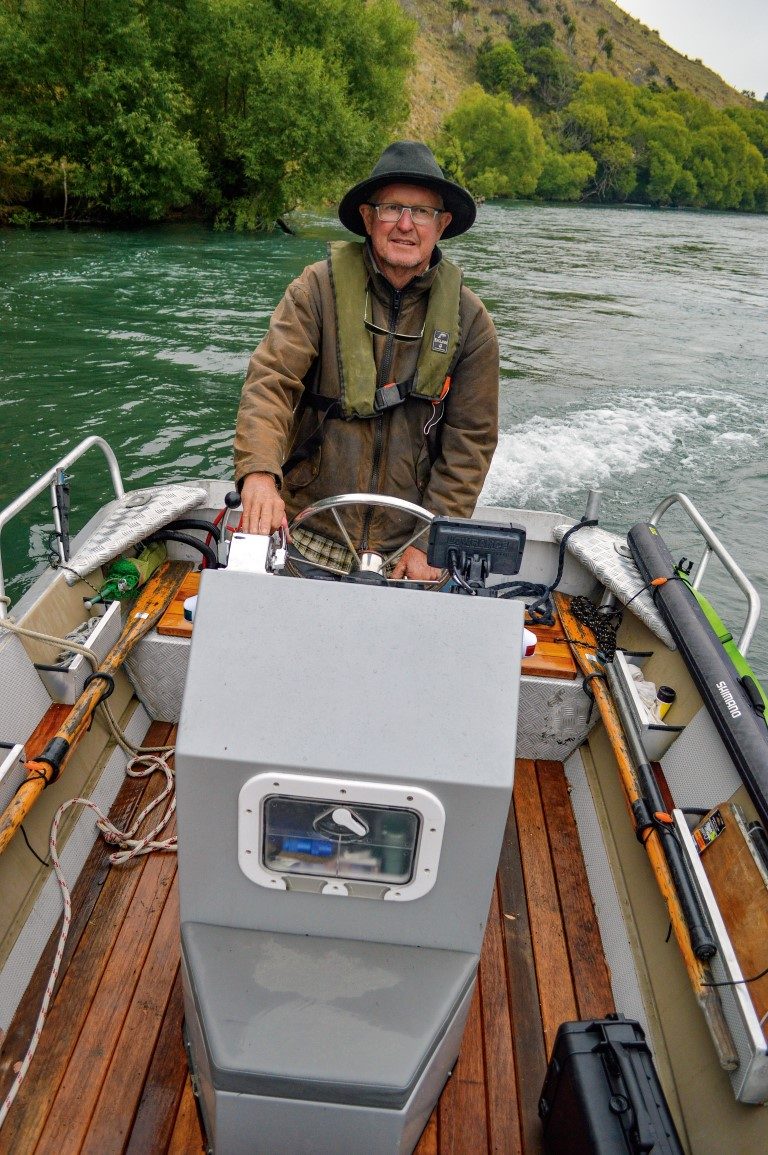 As part of the renovations, the aluminium floor was removed along with large slabs of 30-year-old saturated polystyrene flotation. With the floor up Tucker took the opportunity to rewire the boat, and after a small short and electrical fire, rewire her again!
A recycled kwila hardwood floor (on rubber strips) was laid over the aluminium ribs, which provides a quieter ride anda warmer feel to the boat. Alloy plate from the old floor was recycled to extend the anchor locker, reinforce the transom and create twin-boarding platforms that allow easier access from the water to the flared hull.
The gunwale handrails were extended and a centre console from King Watercraft was added to provide walk-around access for fishing and a comfortable standing position that allows the helmsman to read the river. It was the perfect Covid lockdown project with months of careful deconstruction and redesign out of which came an excellent salmon fishing riverboat. 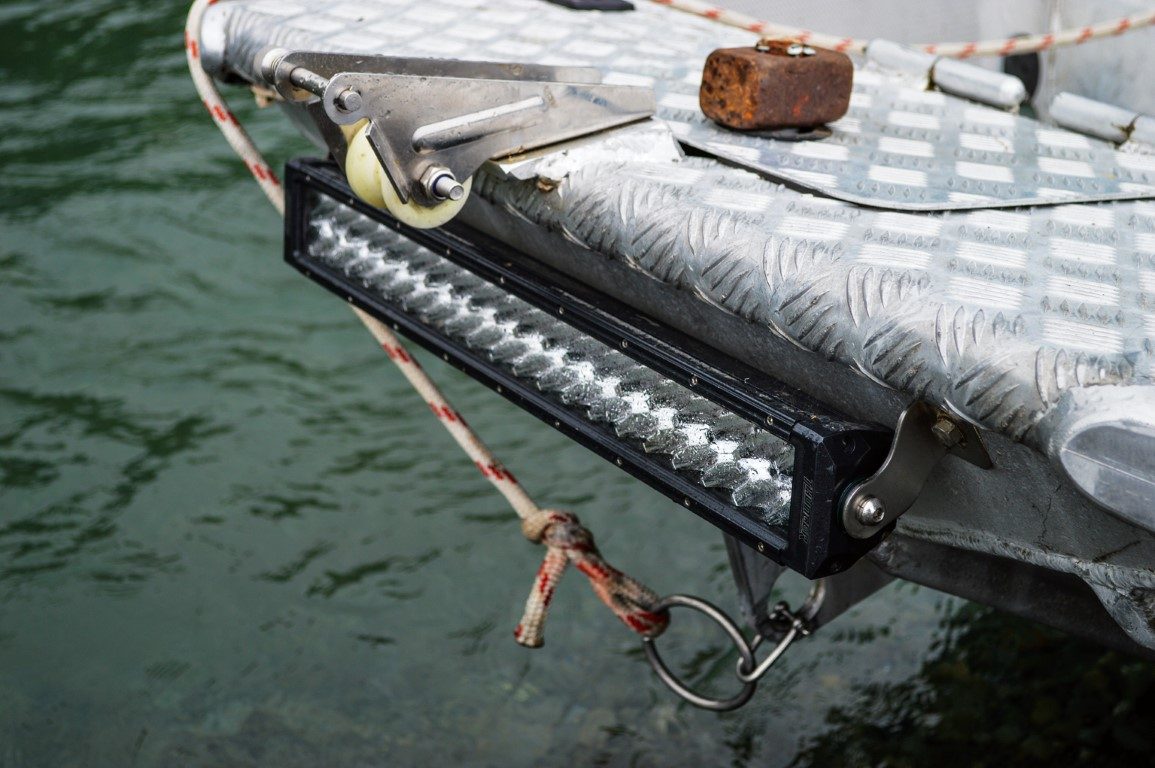 Every conceivable addition was added to make the Wooldridge a fishing machine, from multiple strategically-placed rod holders, seven gear hatches, a bow-mounted anchor spike (a driveshaft out of an old Nuffield tractor) and a plough anchor back-up. The ultimate bit of bling? The LED floodlights on the bow for early morning departures and late evening returns to base.
Going for a spin in the Wooldridge is an education for a saltwater dandy like myself. The lower reaches of the Hurunui River are swift and braided like most Canterbury rivers.
Launching the Wooldridge illustrates the first advantage. She is light enough to slide off the trailer and hold against the current without the hassle of driving her on and off. With that out of the way, we booted downstream to the lagoon, which allowed us a straight stretch to get photos and induct me into the art of driving an outboard jet.
Tucker has picked up this skinny water business quickly and does all sorts of tail wagging to push us over the shallow bits on a bulge of water. Planing quickly and in trim is vital to all of this.
Staying in displacement mode is asking to become a beached whale and, with this in mind the Wooldridge has what I call ‘no rise’ (that is zero deadrise), or an arse as flat as shovel blade. With no sea to contend with, it’s all about having a shallow hull that planes quickly. 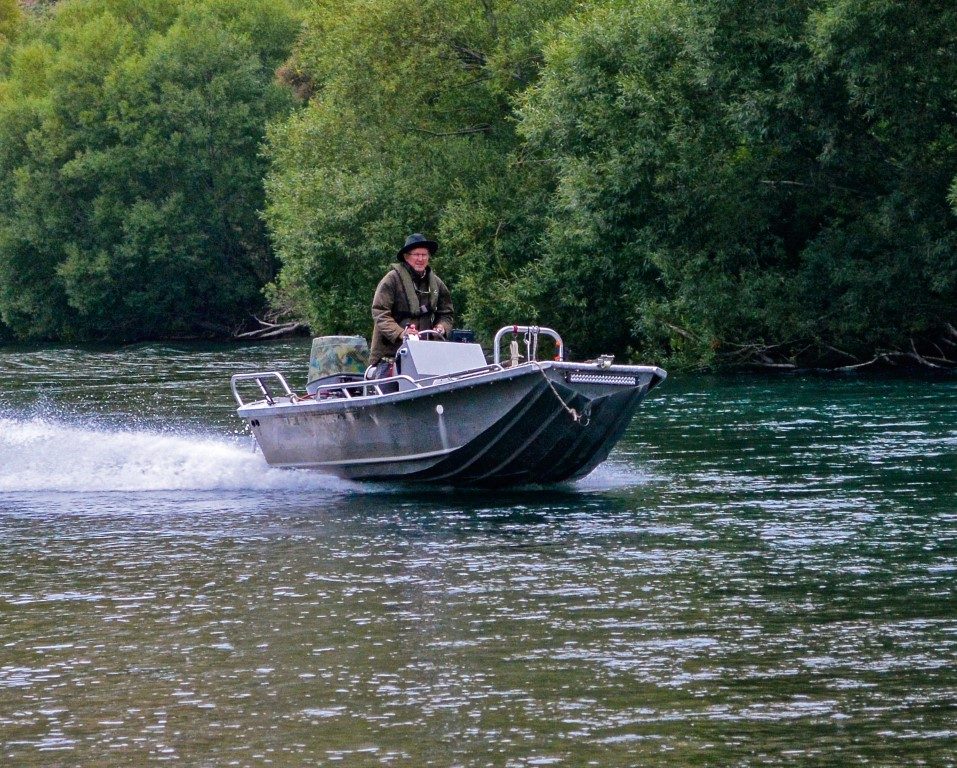 While the Wooldridge is no oil painting to look at, she is a hoot to drive. With a little wiggle of the helm as you give her the curry, she is quick on her feet. The two-stroke Yamaha has plenty of power in its band and, as it is the power that steers you, that’s useful in the corners.
As her hybrid nature suggests she steers neither like a pure jet boat nor like an outboard. In the first part of the turn the sharp forward chines help you carve, but somewhere in the middle of the turn the flat bum lets go and you end up doing a skid turn.
It is more like drifting than cornering and it is a hoot that brings out the freshwater bogan in me. In the end, the mantra is to keep the power on and allow enough river room for the drift.
While hooning in the lagoon we catch sight of a forlorn character in his dinghy on the far shore. He has been downriver salmon fishing but the tide has dropped and the flow has increased so he cannot make any way rowing against the current.
We are having way too much fun and do our best to ignore him. But eventually some semblance of adult responsibility creeps into our hooning and we make eye contact. As he pleads his case to us in a convincing manner Tucker and I are like a couple of kids who have been called in for dinner by Mum. We give up being drifting bogans and tow him home upriver like respectable adults. There is nothing in-between.