John Street has been personally responsible for the saving and superb restorations of many of our classic yachts, both from the Logan and Bailey stables. Ethel is his latest.

The Logan brothers would be amused to look out on the Waitemata Harbour today, 109 years after they closed their yard in Mechanics Bay, to see a very high proportion of the yachts they built not only still in existence but also sailing competitively.

In less than 20 years of production during the Golden Age of our yachting history, the brothers provided Auckland with a stock of keel yachts that has been cherished and made to last well beyond the international norm in the Kiwi No.8 fencing wire tradition of the sometimes hard times since. 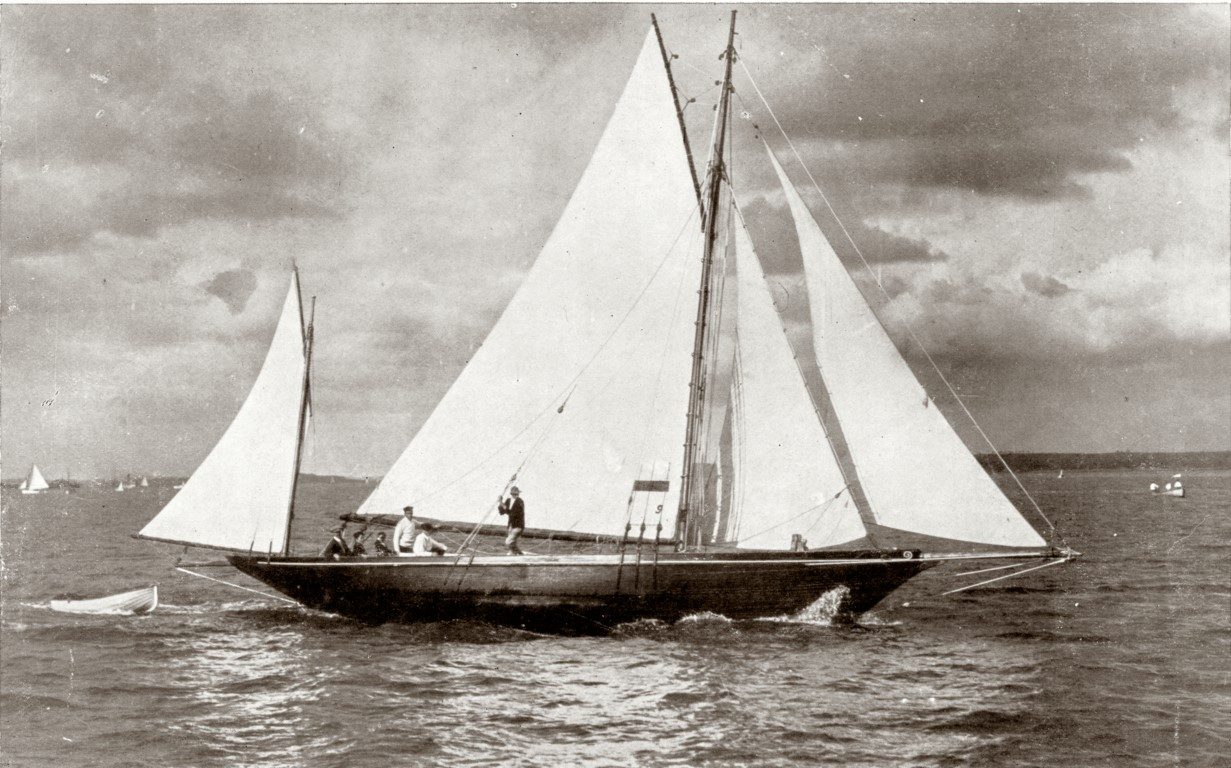 Street has chosen the Logan Bros yacht Ethel as his latest project. They built her for Colonel Herbert Dawson of Great Mercury Island and launched her in late 1896. The Auckland Star of 14th November 1896 had this to say:

“Messrs Logan Bros have just finished at their shed on the Railway Reclamation, a handsome cutter-yacht to the order of Mr. H. Dawson of Great Mercury Island. The Ethel, as she has been christened, is a shapely craft of close on 12 tons, and is built chiefly for cruising about the owner’s place and for occasional communication with Auckland.

“Her dimensions are: Length overall, 48 feet; l.w.l., 24 feet; beam, 11 feet; draught, 5 feet 6 inches. She is coppered on the bottom, has a lead keel, and carries inside and outside several tons of ballast. The yacht is rigged with a pole-mast and will carry a good spread of canvas, and her overhanging bow, black paint, gold streak and scrollwork give her a smart appearance.

“Her lines are good, and indicate speed, while at the same time she is given enough beam to ensure her being a very roomy, comfortable boat. The Ethel is fitted with a roomy cabin aft, panelled and very handsomely finished, with sleeping accommodation for eight persons, and there is a hold amidships for carrying stores, etc., and a place forward for one hand, with an oil stove to do the cooking. The yacht is diagonal built of kauri, with three skins, and is one of the best pieces of workmanship yet turned out of the Logan Bros’ shed.”

Dawson had bought the island in 1893 to run cross-bred sheep for fine wool. A vessel was needed to run wool to Whangapoua on the mainland – and supplies back – plus occasional trips to Auckland. Robert Logan Sr had built Ngahau, a very similar vessel, for E.N. Boult of Whangarei in 1892, halfyacht, half-trader, with enough beam to carry Boult’s fruit and produce to Auckland and stand up to often tough conditions on the east coast.

Ethel was a tad bigger all around than Ngahau, but both were elegant, fast yachts as well as being practical load-carriers. Ethel’s stylish cabin top featured oblong ports in the style of Ladye Wilma of 1895 and, harking back, to Jessie Logan of 1880. 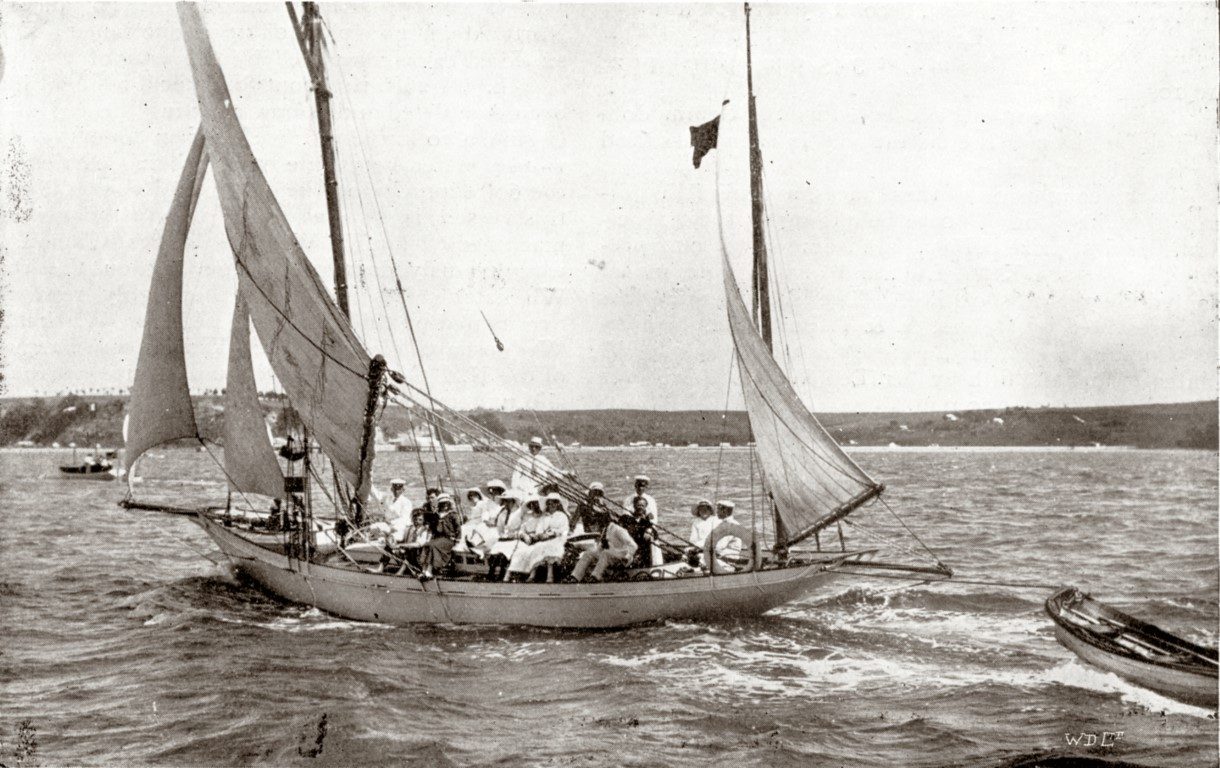 Through the agency of Auckland yacht-brokers Sinton & Fisher, Dawson advertised her for sale in November 1911, now converted to yawl rig, with two tons of lead on her keel and five tons inside. In February 1912 Dawson sold Great Mercury to John and Frederick Kemp who ran Ethel for some months. But something odd occurred and we see Sinton & Fisher themselves entering her in races on the Waitemata up to January 1913.

By May 1913, wire mattress manufacturer W. J. Quelch of Glen Road, Stanley Bay had swapped his Collings & Bell-built launch Dorothy with Kemp for Ethel. Quelch had her cargo hold converted into a comfortable main cabin, painted her white to help with upkeep and kept her moored off Stanley Bay wharf. Until his death in 1934, when he had the new Colin Wild-built 36ft keel yacht Vida, Quelch owned a large number of prominent yachts and launches, rarely keeping them for more than a season. 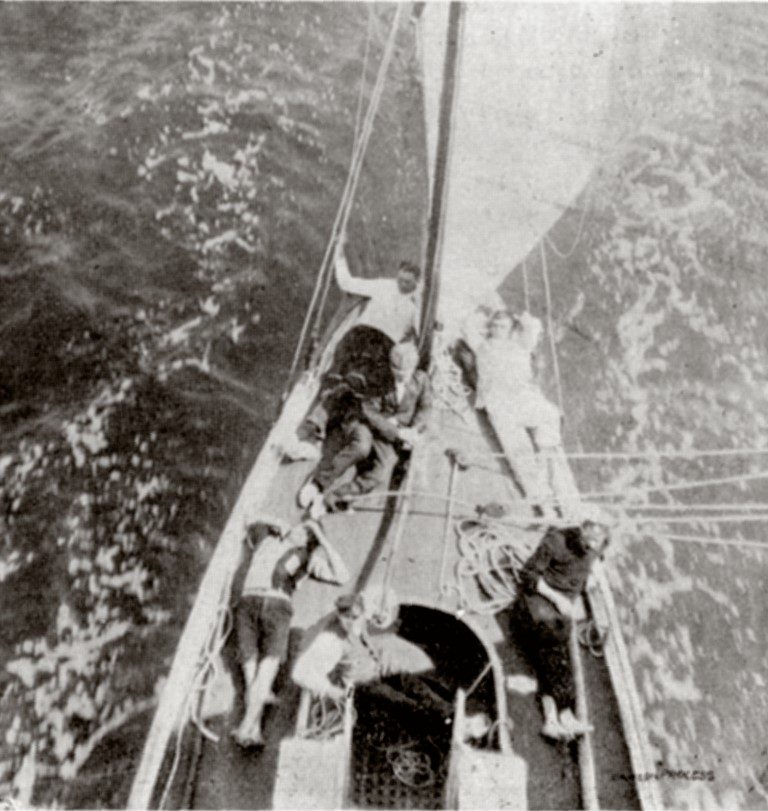 By March 1914 Quelch had moved on to a newer boat and sold Ethel to buy the Tom le Huquet-built keel yacht Alexa. Ethel went to another prodigious launch and yacht owner of the time, dental surgeon W.R. Ingram, who part-exchanged his Bailey & Lowe-built 24ft linear rater Eulalie for her. Ingram had become enchanted with large two-masters after hiring the Logan Bros 61ft yawl Dawn for the 1911-12 summer and having a great cruise about the Gulf with his family.

Ingram installed a 12hp auxiliary in the cockpit, put two more tons of lead on the keel and set about racing seriously with North Shore Yacht Club, of which he was a flag officer. But when the 1903 52ft Logan Bros cutter/yawl Ilex became available to him after the death of J.C. Macky and his wife in the sinking of the Lusitania in May 1915, he sold Ethel to Captain F.E. Wills of Onehunga.

Captain Wills sailed Ethel around North Cape to the Manukau where she was used for fishing outside the heads, her fine main cabin converted to a refrigerated fish hold. Later she went down the west coast, fishing out of Waitara north to Kawhia and Marokopa.

There follows a gap of over 10 years of silence on her activities but in 1938 she was reported as having spent many years lying in the Henderson Creek. At this time Dick Lang hauled her out at his St Mary’s Bay yard and put new keel timbers in her.

Indeed, St Mary’s Bay was to be her home for many years, owned by fisherman George Murphy, who lived in a large early villa in London St behind the Ponsonby Cruising Club’s clubrooms. As a child living on the Devonport waterfront in the 1940s I used to see George Murphy plodding up harbour late on Sunday afternoons, with Ethel under power, a three-cylinder Lister, hugging the wharves on the south shore, out of the tide, but often into the teeth of a strong westerly.

Her distinctive long, lean medium-blue hull was quite unlike anything else on the Waitemata. Obviously a faded beauty, she still was cutter-rigged with a pole mast and a heavy stained canvas trysail, but I rarely saw her under sail.

Another gap, and in 1975 Ethel was owned by John Smith on a farm near Paeroa with a hole in her side. John did extensive repair work including new decks and a cabin top. In 1999 Tom Leary of Grey Lynn secured her and got her in good enough shape to use her for charters, somewhat underrigged, black-hulled and piratical of aspect, but living and breathing again.

In November 2011, after Tom’s untimely death, a pair of cheerful gentlemen, Keith Munro and Kevin Ebbitt, bought her. She was by then largely derelict at Te Atatu, the seams of her black-painted hull gaping in the sun. Keith and Kevin set her up in a temporary covered structure in the congenial environment of the hardstand run by Te Atatu Boating Club.

Munro – a steel fabricator – had the task of producing all the metal fittings. He has a lengthy yachting history with many off-shore sea-miles. With a background in centreboarders at Point Chevalier Sailing Club, Ebbitt served his time as a boat builder with Shipbuilders Ltd with Roy Steadman alongside fine tradesmen like Cyril Freeman and Colin Silby.

Ebbitt did all the fine wood work about Ethel. By constant part-time work, assisted by John Wright who owned the smart 1919 38ft launch Jeunesse, they reached the point of relaunching Ethel in the last days of October 2013. 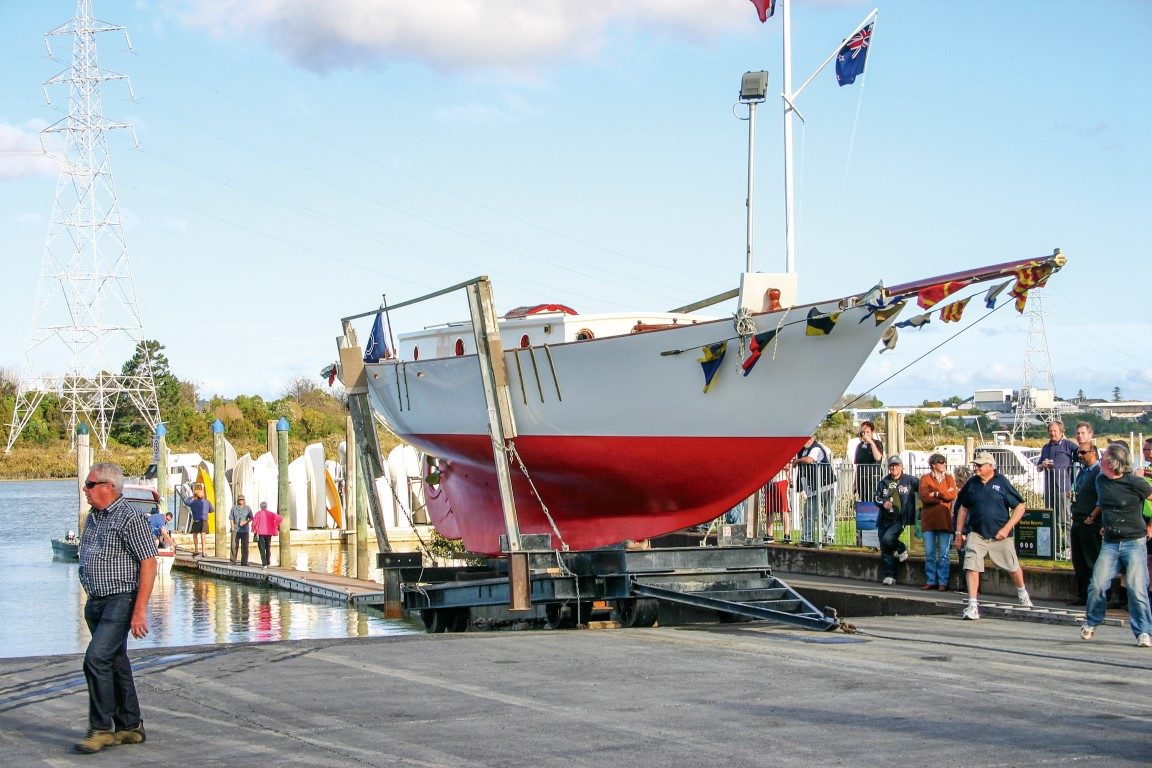 While their massive refit didn’t qualify as a champagne restoration of the extent and expense of, say Ngatira, Rainbow, Ariki, Rawhiti or Ida, they launched Ethel in fine shape physically and with a strong resemblance to her original form. And now John Street will be adding her to the fleet of the Classic Yacht Trust, affirming once again that Old Logans will never die!

The Alexandra Shackleton: BACK FROM THE ICE