An 18m, 110-year old yawl lying in Wellington’s Mana Marina is a rare, surviving example of the work of her American designer – Charles Drown Mower. Her age and life story make her a definite candidate for restoration, but she needs plenty of help.

U Whilna is a North American Indian word for the osprey or ‘graceful bird’ – and that she is. Even with her missing masts and the extensive life scars, the grand old dame’s former elegance shines through.

The scars are the reminders of an extraordinary past. She’s survived 10 owners over the first 100 years of her life – roughly one per decade – and her current owner (a syndicate headed by Wellington filmmaker David Holley) is the 11th. She’s covered a lot of miles since her 1909 launching. 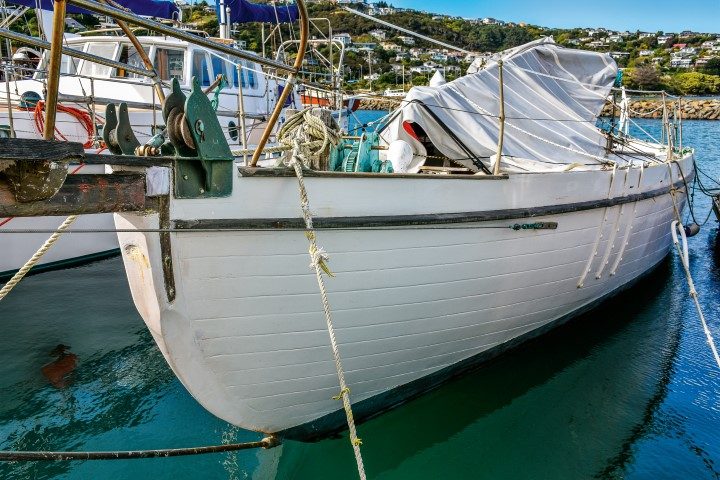 She was built in China by the Shanghai Kwong Fook Cheong boatyard (it no longer exists), constructed with 30mm teak planking over iroko frames. She was commissioned by the then Commodore of the Royal Vancouver Yacht Club (RVYC), Richard Henry Alexander, who wanted a fast racing yacht.

The design fell to New York’s Charles Mower (1875-1942), a well-known designer and writer. In addition to his many books aimed at DIY boatbuilders, he was at one time the design editor of the famous Rudder magazine. He was also official measurer for the Manhasset Bay Yacht Club, the Cruising Club of America and the New York Yacht Club. 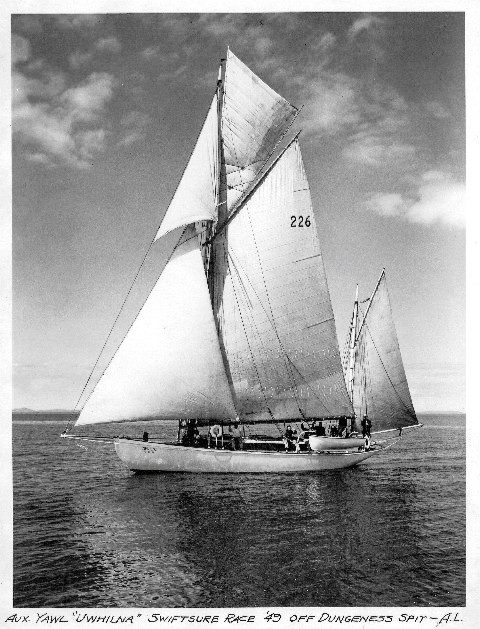 And he knew his stuff – uWhilna was very quick. Alexander sailed her to victory in the 1913 Beaver Cup. A later owner, Fred Mills, repeated the feat in the 1938 Beaver Cup and she was awarded the Bird Rock Trophy in 1941 after becoming the RVYC’s first yacht to circumnavigate Vancouver Island.

After a successful 30-year racing career, she was laid up under covers in Seattle in 1942 to avoid being seized by the US Government for the lead in her keel.

She first arrived in New Zealand in 1974 during a circumnavigation by her then owners, Seattle’s John and Maxene Hohmann. Together with their two sons and dog (Salty), the Hohmann’s made headlines in many parts of the world for their far-out decision to ‘opt out of the rat race’. They sold everything they possessed, refitted uWhilna as a cruiser and embarked on a five-year 50,000-mile voyage. 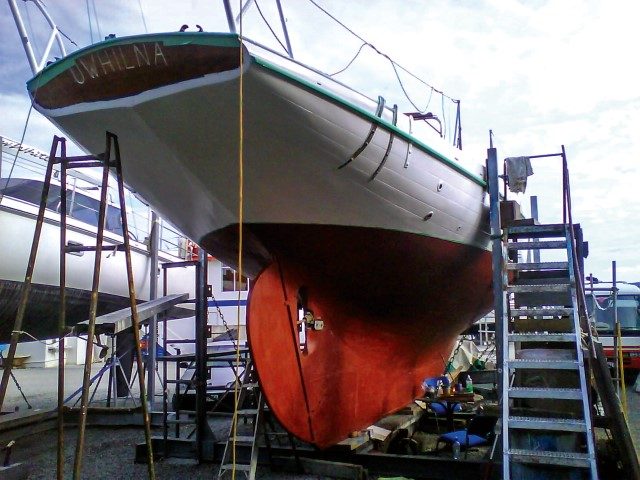 Back in Seattle she changed hands a few times and then returned to New Zealand in 1991, after an extensive refit by Seattle boatbuilder Victor Culina who refastened and re-caulked her. Here, she again changed hands and then lay in Whangarei’s Town Basin for many years, unattended and unloved, a convenient home for marine creatures below and above the waterline.

The syndicate acquired her in 2007 and one of its members (John Creser) elected to sail her to Wellington where he could begin restoring her in earnest.

By then her original gaff-rig was a distant memory – though she still carried timber masts, she was now a Bermudan cutter. Her age and condition quickly became apparent. A few days into his single-handed delivery – somewhere off the Kaipara Harbour – the mast snapped below the top spreaders. 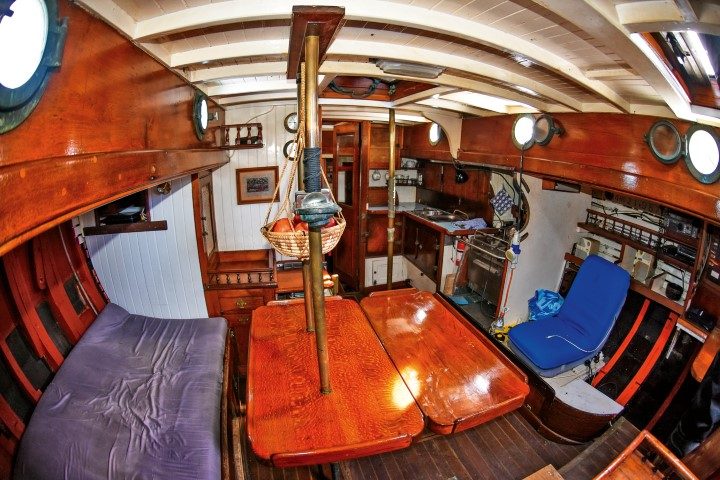 The Hohmanns, coincidently, had suffered exactly the same fate with the original mast when they set out on their circumnavigation. In fact, Creser believes they had fitted this very mast which snapped some 50 years later. With the top third of the mast jettisoned, he sailed her home under a small foresail/mizzen jury rig.

Creser’s been toiling on the boat for the last 12 years – doing much of the work with volunteers from the Titahi Boating Club and bringing in specialists where necessary. And the schedule’s been extensive. Her engine – a 56hp Standard Vanguard diesel – had been in the boat for about 60 years but was very tired. It was retired.

Hugh MacCrae rebuilt the rudder box, fitted new tanks, installed a new shaft and cutlass bearing and replaced a number of frames. Creser has a substitute engine – a well-worn 50hp Ford D series – but concedes a more modern engine would be a better solution. 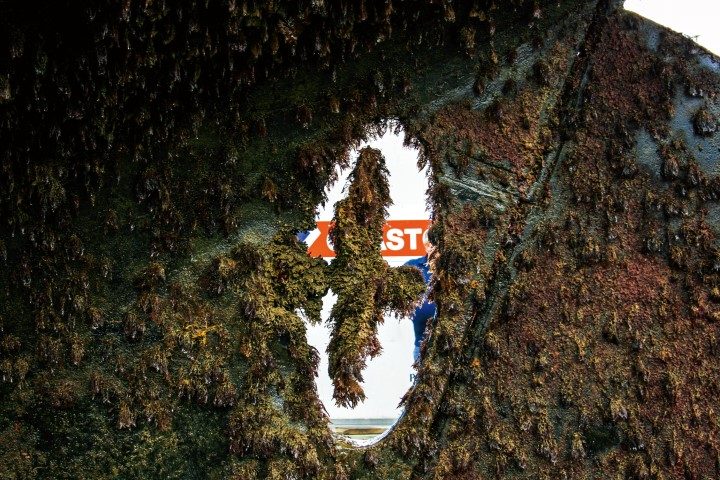 In 2012 the engine beds were replaced by Wellington boatbuilder Maurice Dickie, and a new mast acquired via Trade Me (an alloy model which previously belonged to the Aucklandbased classic Rawhiti). And the caulking was redone.

Culina – the Seattle boatbuilder who sailed uWhilna to New Zealand for the second time – elected to settle here and still lives in Whangarei. While he owned her he installed new bronze floors. He likes to keep an eye on the vessel’s progress and recently shared this observation with Creser: “You know John you’ve got something in common with all the people that have owned this boat? You’re completely nuts.”

Exploring uWhilna’s interior is like entering a time-warp. As you’d expect, she’s been modified and changed many times by various owners – not always for the best, it must be said. But there’s lots of rich teak structure, and it’s hard to miss the large, brass Mandarin characters on the toilet – I’m told they’re the phonetic representation of uWhilna. 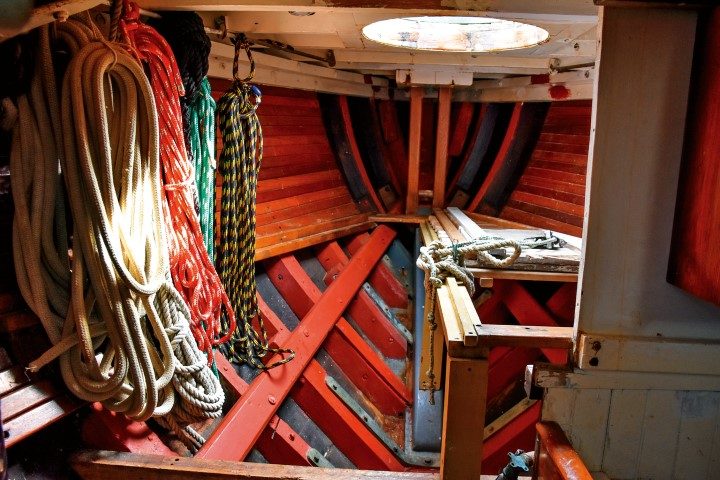 In fact, the interior is extraordinary in the way it conveys the sense of how things were done in the ‘Eric Hiscock’ era – it’s wonderfully reminiscent of the Wanderer books I devoured as a wannabe teenage circumnavigator. It’s hard to believe she was designed as a racing yacht.

On deck, you’ll find glorious pieces of sailing gear dating to yesteryear – bronze winches, unusual hatches, cleats – and a windlass that wouldn’t have looked out of place on Cook’s Endeavour. All of these were added long after she was built. 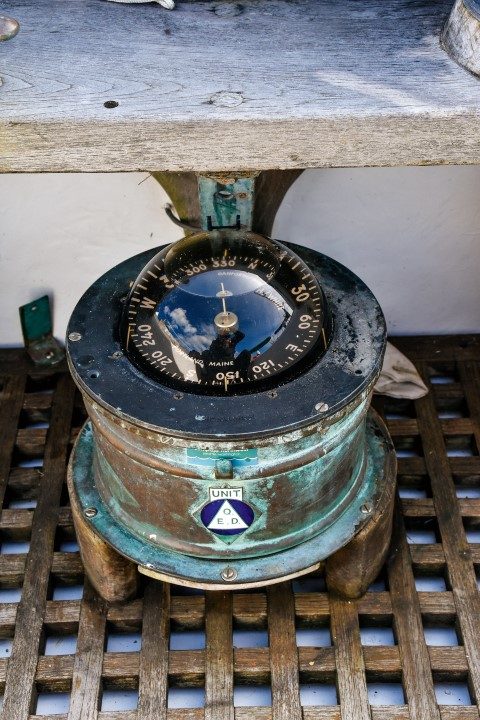 Where to from here? Well, there are a few options.

“Saving this boat,” says Creser, “is important. She deserves to be saved – I want her to survive – but she’s too big a project for our syndicate. She needs more resources. In an ideal world, I’d like to have her finished and sailing in time for the 2021 America’s Cup.

“But if I were to be completely objective, I instinctively feel she should be returned to the US or China – probably to the Mystic Seaport Maritime Museum in Connecticut. That’s where the remnants of Mower’s legacy lives – in the Museum Library – though much of the original material, including many of the models he built, was destroyed in Hurricane Carol (1954) and during a monster storm in 1992. All that’s left are 433 sheets representing 107 designs – a few small boats – and uWhilna.

“That’s why preserving her is so important to Mower’s legacy and the skills of the Chinese builders.”