They may look more like Christmas Tree decorations than fishing lures, but kabura or slider jigs do the business on snapper – and a whole range of other species.

Think about it: no more buying smelly, expensive bait and berley before each fishing trip, and no more bulky chilly bins to store it all. Instead, picture a small tackle box containing a handful of lures and diminutive, lightweight, fun-to-use tackle generally providing far more fish at the end of the session!

Yes, if you can fish a ledger or flasher rig with a heavy weight attached – a Black Magic type Snapper Snatcher, for example – you can catch fish on a tai rubber slow-jig-type lure, better known locally as a kabura or slider.

Mind you, I wouldn’t blame anyone seeing a kabura for the first time having doubts about its potential. With a globular, free-sliding head atop a clump of spindly, multicoloured tendrils, a kabura looks so unlikely! But boy, do they work well! 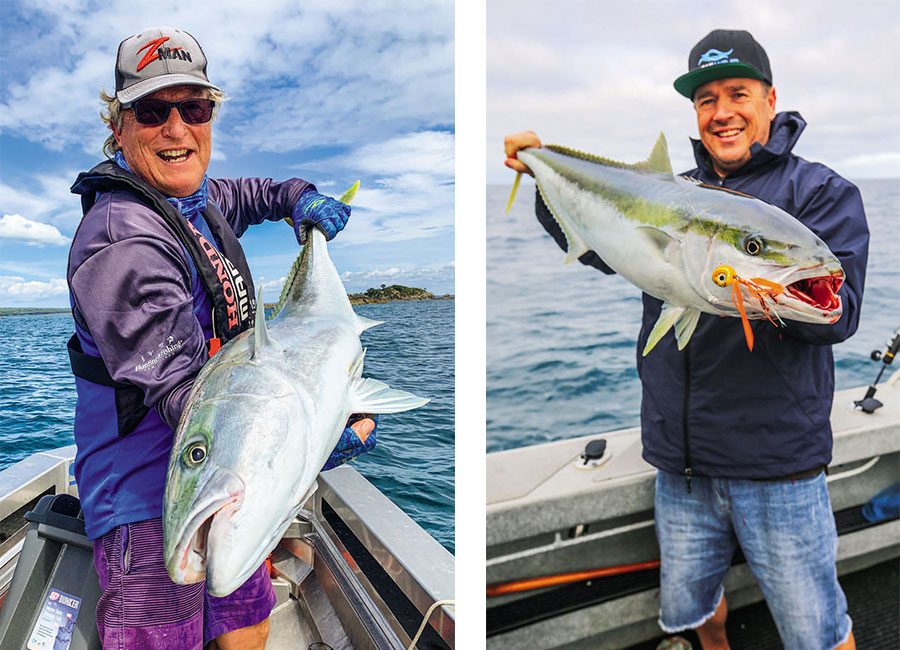 It is not necessary to find work-ups to catch fish on kabura-style lures, but they can definitely reduce the waiting time between hook-ups.

HOW DO SLIDERS WORK?

While the bulbous head tends to dominate the lure’s appearance, especially in the heavier weights, it’s actually the long, slim tentacles that play the biggest role in the slider’s effectiveness. The tentacles’ undulating magic often proves impossible for fish to resist and their nemesis is nestled among the tendrils – an assist rig armed with two small but very strong hooks.

The lure’s other key secret is the way it behaves in the water. When falling towards the bottom, water drag initially causes the tentacles to separate from the weighted head, which descends faster. The tentacles are prevented from sliding too far up the line by the trace-to-mainline joining knot.

This behaviour sees the weighted head hitting the seafloor first, leaving the long tendrils still waving and fluttering seductively well up off the bottom, where they look vulnerable to any predator. The short time period between the heavy head touching down and the two components of the lure coming back together is when bites tend to occur – anglers who click their reels into gear when they feel the slider’s head reach the bottom often find themselves holding a bucking rod with a reel unloading line! 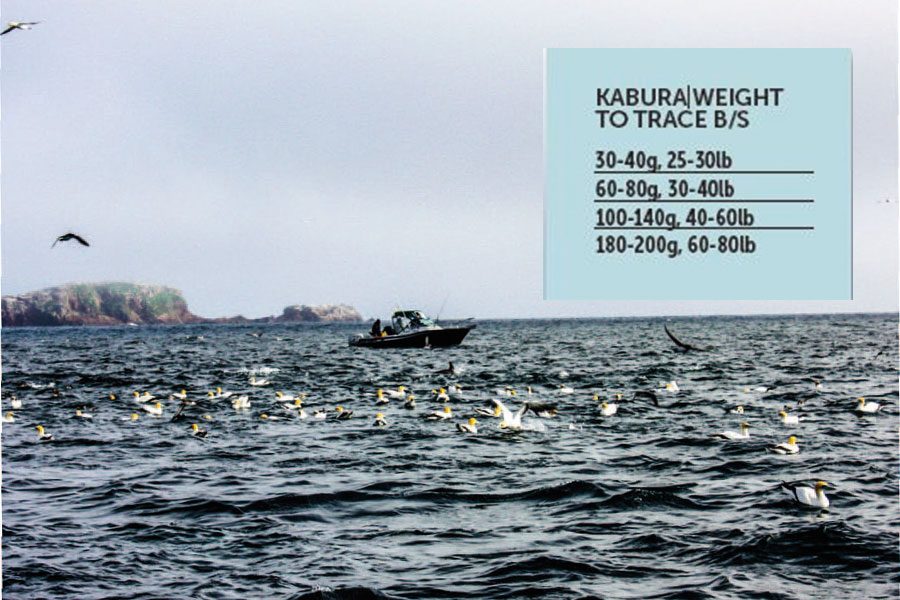 The rod: Any light rod rated for 4-8kg line with a whippy, forgiving action is a good candidate (lightweight soft-bait rods will do the job), but, shorter specialised slow-jig rods make the most of the technique’s potential and provide the best success.

That is because specialised slow-jig rods exert more precise control – longer rods tend to move sliders too far, too fast – and their ultra-light tip section is designed to slow the lure’s movements to create a more seductive action. The same light tip helps to absorb any sudden head shakes and bursts of power from hooked fish, so the small hooks are less likely to rip or bend out.

The reel: Reels can be overhead (i.e. a baitcasters or small freespool reels) or spinning models holding around 250-300m of 10kg braid. It’s unlikely you’ll ever break or lose that much line to a snapper, but wear and tear tends to shorten the mainline over time and it’s comforting to have a bit of insurance when you hook a decent kingfish.

Mainline: This should be braid, around 20-30lb breaking strain, typically labelled as 15-20lb (7-10kg) – braid is notorious for over-testing. Braid is thin so it cuts through the water which means lures remain near the bottom for longer. Braid’s lack of stretch transmits any fish contacts – nibbles, bumps and bangs – to the angler more effectively.

Trace material: The deeper the water and the stronger the current and/or wind, the heavier the kabura and the stronger the fluorocarbon trace should be. The leader needs to resist any chafing when the line is under tension with the heavy slider flicking around as a snapper shakes its head – see the lure to trace weight table. Around two metres of trace does the job nicely.

The lure: When fishing sliders ‘as light as possible’ is not recommended! Instead, choose a lure weight that gets down and stays there.

If undecided, always choose the heavier option, especially since a lure bumping along the bottom creating vibrations and kicking up silt and sand, will draw hungry fish in for a closer look. Hopefully that interest will result in a bite!

To give you some idea, fishing charter operators using sliders on a near-daily basis tend to start with 140g lures when fishing in 35-50m of water, but change up to 180g if the wind and/or current picks up.

Look for lures from reputable brands incorporating bright colours – fluoro orange and pink are well-proven and luminous paint is known to attract fish. 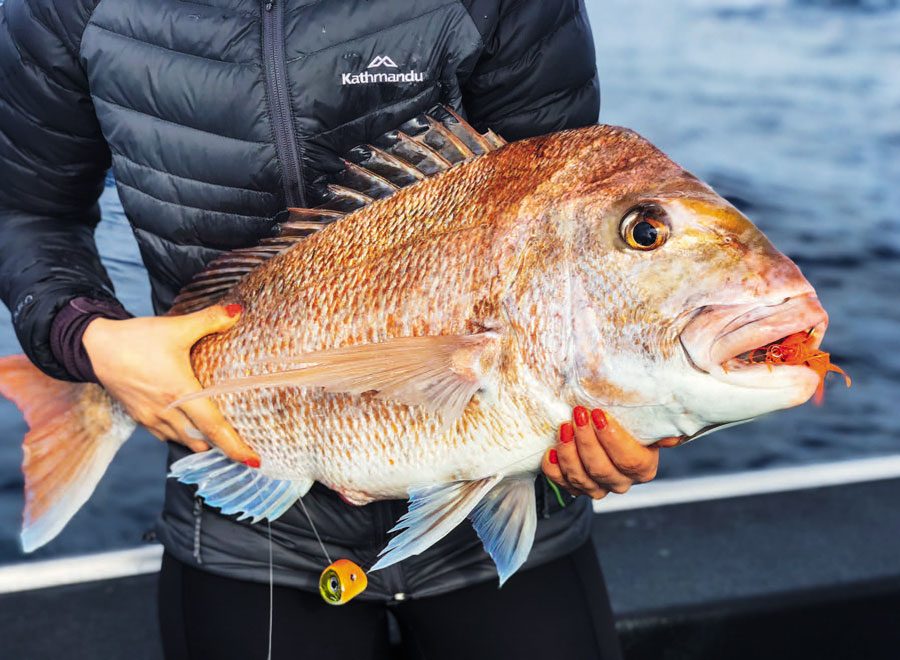 A chunky snapper on a brightly-coloured slider from deep water

GET THE BEST FROM YOUR KABURA

As soon as the lure touches the bottom, engage the reel and – if you are not already hooked up – slowly wind up a few turns of the handle, retrieving three to six metres of line.

Or you can try ‘mechanical jigging’: lifting and dropping the rod while simultaneously making one full rotation of the reel’s handle. This slow-motion lift-and-drop action keeps the lure in the strike zone for longer.

Whichever retrieve method you choose, resist striking when you feel a fish biting. Instead, wind the reel or lift the rod a bit faster – this will often make the fish bite harder and hook itself.

If you get no interest within the first several metres of the retrieve, drop the lure back to the seafloor, repeat and repeat again! When the line angle reaches around 35-40o, it’s time to wind in and start the whole process again.

NB: Lobbing lures up ahead of the boat gets them to the seafloor quicker and they stay there for longer before lifting off the bottom as the boat drifts over and past them. 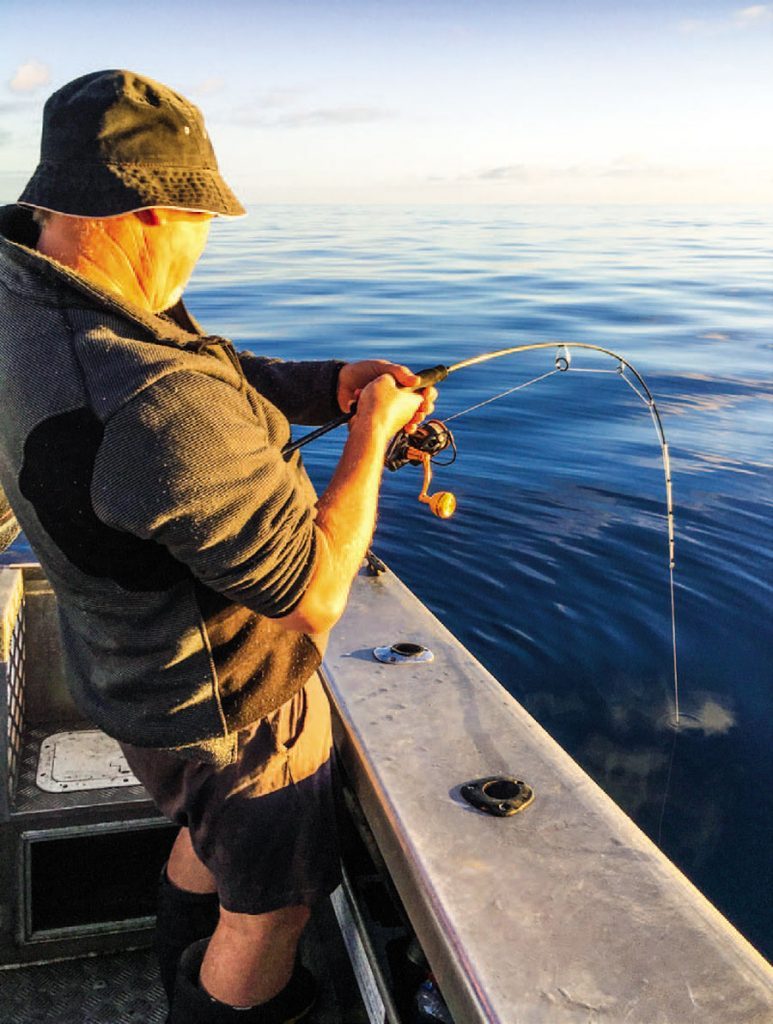 Using specialist tackle like this whippy rod with its parabolic action allows an angler to make the most of a kabura’s fish-catching ability.

• It is best to drift-fish when using kabura-type lures. If necessary, deploy a drogue to slow the drift speed enough to allow your offering to reach the bottom and stay there, trundling along at a fish-catching rate.

• Fishing rough ground results in lost tackle, so stick to reasonably clean areas. Look for promising fish marks on the fish-finder near the bottom in 20-100m of water (30-50m is usually best) and seek out work-up activity, as workups really attract fish and get them biting.

• The better fishing grounds hold food snapper like to eat – shellfish, crabs and sea worms – with the best areas also exhibiting significant depth changes or nearby structure that interrupts the tidal flow. Bathymetric charts can assist in locating suitable areas.

• When the water is less than 20m deep look for current and preferably water that’s a little murky, to help disguise your boat’s presence.

• Snapper can be all but ‘invisible’ on sonar when feeding hard against the seafloor, so give an area that’s been consistent in the past at least 10-15 minutes before abandoning it.

• If a steady stream of seabirds flies past going in the same direction, it’s usually worth following them, even if its for several kilometres. Persistence is the key here!

• Feeding activity can be signalled by wheeling, diving birds, fast-moving dolphins, and/or the presence of whales. A good pair of binoculars can alert you to these opportunities.

• Rafts of birds sitting on the water are always worth checking out, especially if they’re gannets. Often they are resting after recent feeding activity and the snapper/kings/john dory etc are still under the birds, deeper down out of sight.

• Congregations of boats are a giveaway: if you see two or more boats in close proximity ‘in the middle of nowhere’, it can be worth checking out to see if they’ve located a workup and/or feeding fish.

• If the fishing is particularly tough, pin a strip of squid tentacle to the assist-rig’s leading hook. The natural scent combines with the lure’s appearance, weight and movement to deadly effect. Keep baits small because snapper will swallow bigger baits, hooks and all, making unhooking difficult and release impossible.

So next time you’re planning a trip out fishing and want a refreshing and exciting change, grab a bunch of sliders, buy, beg or borrow a light, whippy outfit and prepare to turn your fishing world upside down! BNZ