With massive salt deposits and active mining operations deep below their bottoms, the Great Lakes may just be one of the strangest boating locations on earth. Story by Craig Ritchie.

It seems incredible, but every weekend hundreds of boaties on North America’s Great Lakes drive right over people, and often at wide-open throttle.

Think I’m kidding? I’m really not. And it’s not just people – boaties plow full-throttle right over trucks, front-end loaders and all manner of construction equipment too. And most of them have absolutely no idea they’re even doing it.

Sounds fantastic? It is – and testament to the fact that truth is often stranger than fiction. That’s because all the people and vehicles that these boats drive over are actually located hundreds of metres underground in a series of salt mines that tunnel far beneath the lakes.

Understand, we’re not talking tiny tunnels here, but vast systems big enough to accommodate construction equipment like loaders, trucks and even small trains. Centred about 600m below the bottom of Lake Erie and around 7km offshore from the city of Cleveland, Cargill’s rock salt mine is a sunken city of tunnels, some measuring 7m high and 15m wide. There’s even a small train that runs out there to drop off the miners and bring the salt back to shore.

The Great Lakes sit on a bed of salt because once upon a time it was the bottom of the sea. About 500 million years ago what we know today as North America’s Great Lakes basin was actually open ocean. When seismic shifts forced chunks of seabed skyward creating a new continent, the newly-formed Appalachian Mountains trapped gazillions of litres of sea water behind them, which subsequently dried up and left behind a vast bed of salt. In some places, the salt layer is nearly 3,000m thick. 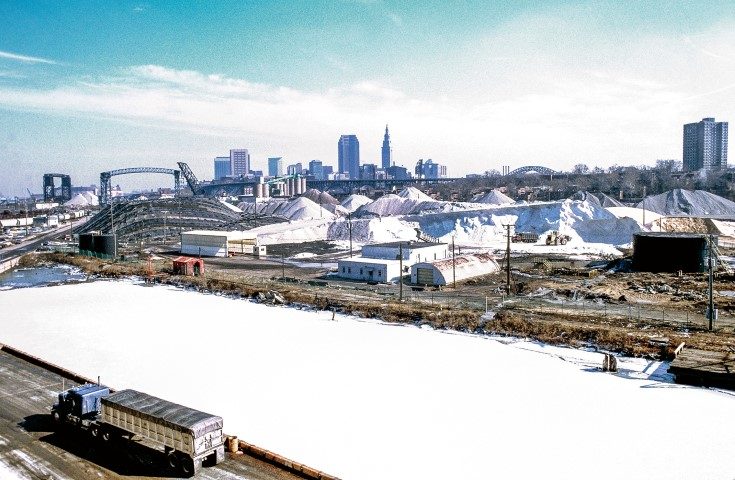 Subsequent ice ages buried the salt bed with vast layers of shale, limestone, sandstone and dolomite, forming the present-day landscape and lakebed. This rock layer happily serves as a somewhat impervious cap that allows miners to extract the salt from below the lake bottom without worrying about moisture seeping into the mine.

It’s convenient that this all happened where it did, because the Great Lakes basin is the ideal place to mine rock salt. For starters, there’s a huge local demand for the stuff every winter, as cities and towns across Canada and the northern US pour the stuff on roads to melt snow and ice – and enhance driving safety. 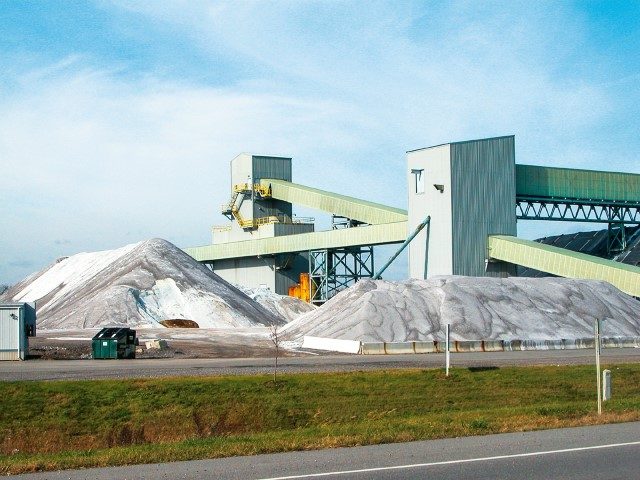 Further, mines on the Great Lakes enjoy easy access to cheap transportation – as the continent’s industrial heartland, the Great Lakes basin is blessed with numerous cost-effective options including ships, trains and trucks. So getting the salt to market couldn’t be easier.

As appealing as it all sounds, the process of actually extracting that salt and getting it to the surface is both complex and expensive.

Salt mines on the Great Lakes, like the massive Cargill mine in Cleveland, use a system called ‘room-and-pillar’ to mine the salt. ‘Rooms’ are created by the extraction of salt, and ‘pillars’ are columns left standing for support. In a nutshell, miners drill into the salt and pump it full of an explosive called ammonium nitrate. They blast, and a front-end loader scoops up the bits and loads them into trucks that take the salt to an elevator for removal. 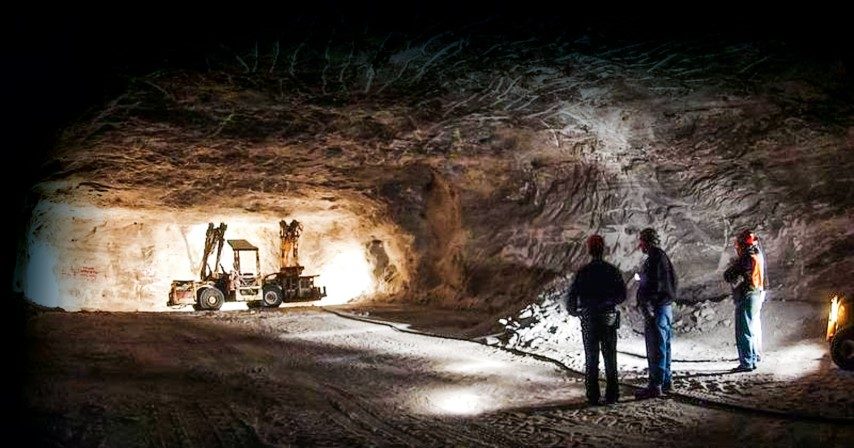 So-called rooms measure about 10m wide by 12 or 15m long, and from floor to ceiling are around 6m high. Pillars are normally around 15m in circumference, so they’re pretty big. Imagine a big open room with a bunch of huge columns holding up the ceiling and you get the general idea.

Because it leaves about half of the available salt behind, the Room-and-Pillar technique is not the most profitable approach. But when you have tonnes and tonnes of water over your head, you have to make certain compromises. 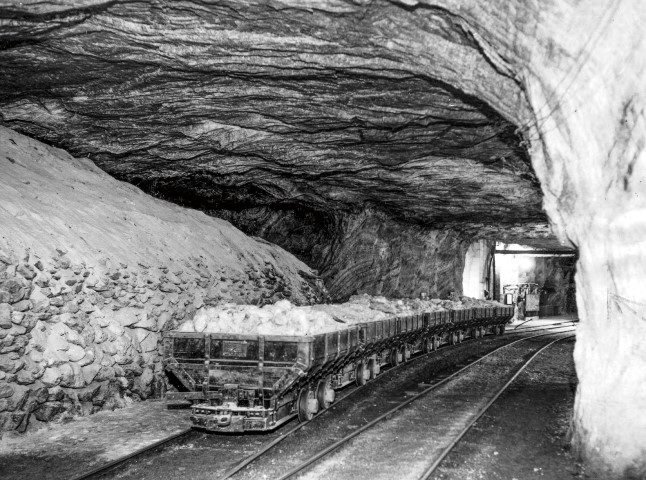 When the Cleveland mine was built in 1961, it reached a depth of 600m. An elevator shuttled men and machinery down the mine’s shaft to a corridor, dubbed Main Street, or the main drag of the mine. The actual mining takes place farther down Main Street or off one of its tributary tunnels, as much as 10km offshore. Constant seismic testing protects miners from harm.

In 1994 another company called Akzo Nobel operated the largest salt mine in the world more than 300m below the Genesee Valley in western New York. In spite of all the safety precautions and careful engineering, two rooms caved in. Within a year, water pouring in from overhead aquifers flooded the whole operation. Fortunately, it flooded slowly and no one was injured. 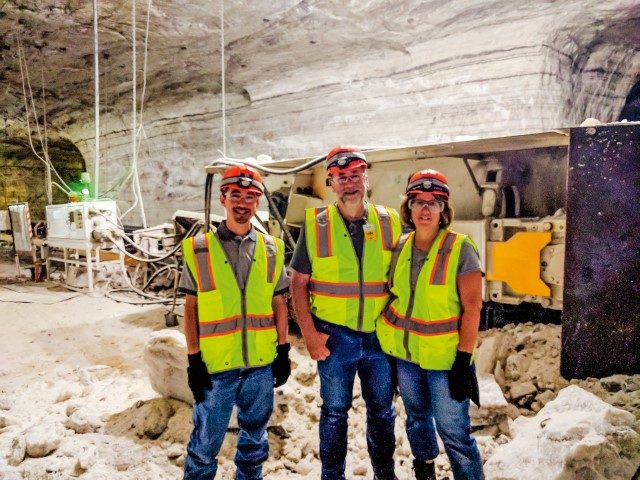 Cargill temporarily closed its Cleveland mine on August 19, 2013, after an anomaly known as a convergence was discovered in one of the tunnels off Main Street. In a nutshell, the distance between the mine shaft’s floor and its ceiling shrunk. Although the shift is measured in millimetres, it’s the figurative canary in the coal mine, since it indicates that either the ceiling is sinking or the floor is coming up. Engineers and scientists evaluated the situation, declared it stable, and the mine re-opened a week later.

Convergence monitors throughout the mine keep a close eye on ceiling and floor conditions, with the results monitored by the company as well as state and federal regulators.

HOW LONG CAN IT LAST?

While there may be mountains of salt under the Great Lakes, every mining operation has its limit.

A salt mine that opened off Detroit in 1906 closed up shop in 1985, after millions of tonnes of salt had been removed. With 53 years of operations under its belt, the Cleveland mine has a lot of life in it still – some estimates suggest it could remain active for another 75 to 100 years. 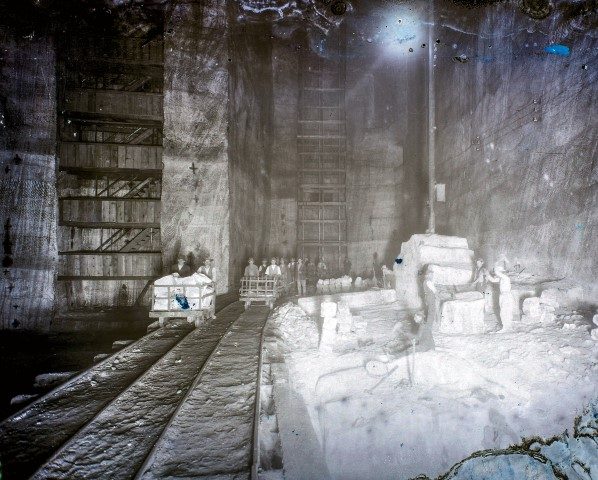 Which is good for Lake Erie boaties. We can continue to enjoy putting the throttle down and driving right over frontend loaders at full speed – and who doesn’t enjoy that? – for many more years to come.

STORING CRAP IN THE BASEMENT

Mining in Cleveland was temporarily interrupted in 1981 when the US Department of Energy conducted an experiment there to determine if it could be used to store nuclear waste.

Facing the prospect of having the lake’s basement turned into a nuclear waste dump, Cleveland residents and public officials dug in and ferociously opposed the tests. In February 1982, Cleveland City Council passed an ordinance to restrict the testing, which ultimately led to the government abandoning the scheme.

Rock salt is legendary for its ability to melt ice and greatly improve winter driving conditions. But it also eats vehicles, harms vegetation, damages pavement and kills fish when salt trucks drive over bridges spanning streams. Alternative de-icing products exist but are expensive enough to be impractical for use on highways and city streets. 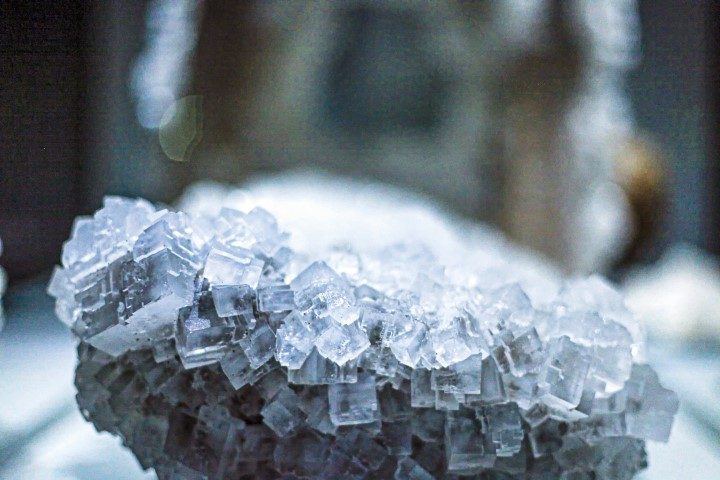 One promising alternative being tested comes from an unlikely source – sugar beets.

Researchers have discovered that a de-sugared byproduct created as sugar beets are processed for consumption can withstand temperatures down to -35°C before freezing. It’s being tested now.

Didn’t your mom tell you that beets were good for you?