If there’s one thing that boaties value all over the world, it’s clean water and healthy aquatic ecosystems. Our love of the water and everything in it comes naturally, as can be expected for people who spend as much time as possible floating around on the stuff.

We like to think that we are a responsible lot, and collectively, we probably do have a greater sensitivity to clean water than most. But there are always things we can do to take even greater care of the resource. For even though boating is a low-impact way of enjoying the outdoors, new innovations and technologies continually make it possible for us to reduce our eco-impact even further.

Sound good? Then let’s dive in – and check out some all-new ways of checking our own environmental footprint on the water. 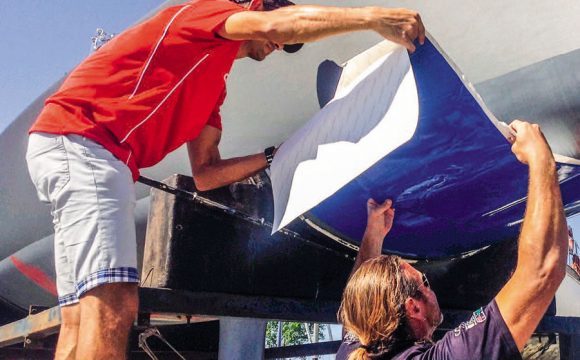 While everyone wants to keep marine growths from fouling the bottom of their boat, no one wants to impact anything else in the process. That’s exactly why a number of bottom paint manufacturers have begun offering completely non-toxic alternatives to the traditional biocides. This stuff isn’t just healthier for the environment, it actually works really well to boot.

Traditional bottom paints work by leaching chemical biocides that kill marine plants and organisms they contact. Growths that try to adhere to a painted hull wind up absorbing a snoot-full of the stuff, and promptly fall off and die. Effective? You bet. Nice? Not so much.

Traditional bottom paints formulated with cuprous oxide and other similar copper compounds come in two basic forms: ablative paint, which is designed to wear off and constantly expose fresh layers of biocide, leaching copper into the environment in the process, and non-ablative paint, which doesn’t physically erode but also leaches copper into the water in order to work.

How much? Estimates suggest a 30-foot sailboat will leach about a kilogram of copper into the water each year, and that can lead to trouble when boats are found in concentrated environments like marinas. Copper levels can quickly build up the point where they exceed government toxicity standards. 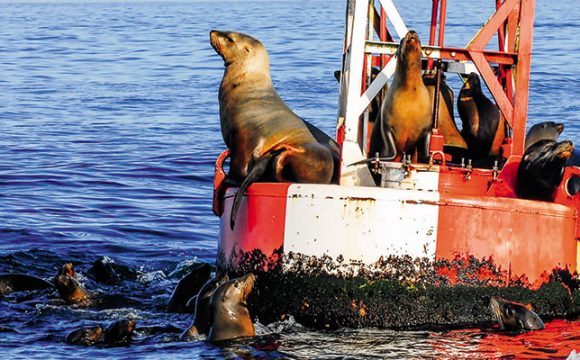 It’s all about minimising your impact on sea life and the environment.

Each year in Europe nearly 150,000 tonnes of anti-fouling paint containing biocides are used.

Next-generation bottom paints like Ecominder and NS-1 from ePaint, which the company notes are used by the US Coast Guard on its aluminum boat fleet; Hydrocoat Eco copper-free bottom paint from Pettit; Pacifica Plus and Fiberglass Bottom Kote Aqua bottom paints from Interlux; and ColorKote, Monterey and Mission Bay bottom paints from Sea Hawk protect boats from marine growths without leaching toxins into the local environment. So, they don’t harm the nearshore fish, plants and invertebrates that are essential to the overall health of aquatic ecosystems.

Another option is to just skip the paint altogether and use tape instead. A Belgium-based company is hoping to capture a chunk of the anti-fouling product with a completely new approach that relies not on leeching poisons, but on making boats too slippery for marine growths to adhere to.

MacTac – the company that has lined kitchen shelves for decades and decorated millions of student notebooks with its peel-and-stick colored vinyl – offers a new, patent-pending antifouling barrier product called MacGlide that protects boats by making the hull so slippery that growths simply can’t adhere. Because it contains no biocides, MacGlide is said to be safer both for the environment and the boat yard employees who come into direct contact with it.

Sold in rolls, MacGlide self-adhesive film sticks to the hull like tape, and is applied on overlapping layers from bow to stern. Once the hull bottom is fully covered, a finishing varnish hardens it to form an armour-like seal that’s said to last far longer than traditional bottom paint. 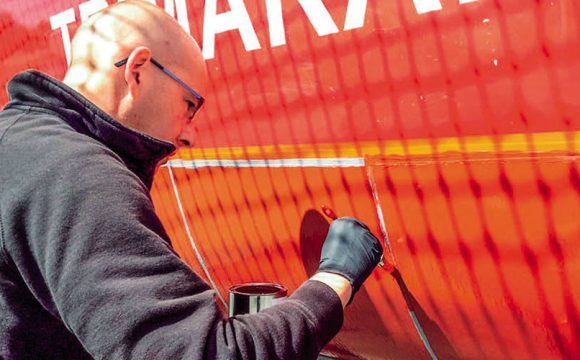 Research the various options for anti-foul paint. Some are friendlier than others.

Growths can still cling to the hull when the boat is tied up to the dock, but once the hull begins moving through the water at more than seven knots, water pressure makes it impossible for the beasties to hold on, sending even tough customers like barnacles and mussels sliding down the hull to simply fall off at the transom.

“Thanks to its non-stick properties, MacGlide anti-fouling protects the hull from the colonisation of marine micro-organisms without spreading toxic substances into the ocean,” says MacTac business development manager, Daniele Perotti.

“It is 100% biocide-free. Each year in Europe nearly 150,000 tonnes of anti-fouling paint containing biocides are used. One square metre of anti-fouling paint contains on average 15 grams of biocide, and each gram of biocide pollutes 10,000m3 of water. Now consider that a 30-foot yacht has an immersed surface of plus or minus 25m2 and it’s easy to appreciate the impact on marine life.”

As an added bonus, the product reduces friction, allowing boats to pass through the water more easily as a result of lower drag. This allows a higher top speed, while simultaneously reducing annual fuel costs by anywhere from five to six percent.

Most of us don’t give a second thought to our sacrificial anodes – those curious knobs of raw metal found on outdrives, shafts, rudders and other components that dangle under the boat. Yet anodes are pretty cool devices.

Metal corrodes in water as a result of naturally occurring electro-chemical reactions. Anodes are made from metals that have a particularly attractive electro-chemical voltage range, so these corrosive reactions tend to concentrate on the anode while skipping other adjacent metal parts. It’s like catering a kid’s birthday party by serving cake and broccoli at the same time – the cake gets devoured, while the broccoli escapes untouched.

Anodes have traditionally been made of zinc – to the point they’re universally known as ‘zincs’ rather than by their proper name. The problem with zinc is that it can be quite harmful when found in high concentrations, such around marina docks.

Exposure to elevated levels of zinc has been found to be highly toxic to plants, invertebrates and fish, for example. Worse still, zinc anodes typically include some amount of cadmium, which has been associated with serious illnesses including kidney disease, atherosclerosis, hypertension and cardiovascular diseases. 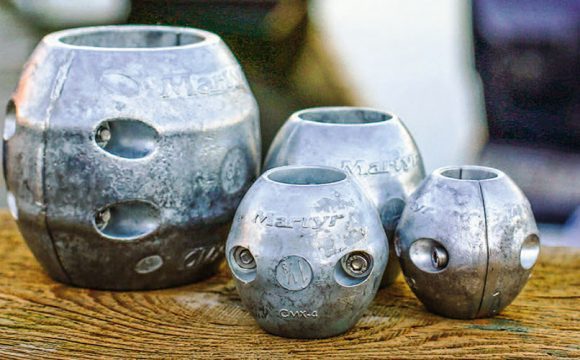 In boat-intensive locations such as a marina, the collective impact of zinc anodes can pose a threat to sea life – aluminium anodes are a popular alternative.

Fortunately, zinc isn’t the only option when it comes to protecting our running gear. Aluminum anodes, for example, are completely non-toxic and even more effective than zinc, which is why they’ve been adopted as standard equipment by every outboard and sterndrive engine manufacturer in the world today.

Beyond being more effective, aluminum anodes last up to 50% longer than zinc anodes of comparable size. Aluminum is also much lighter in weight, and what’s more, it costs less. There really isn’t a downside to it, which begs the question why anyone would use continue to use zinc.

For those who want the ultimate protection, magnesium anodes are an even more effective option for boats that operate strictly in fresh water. Magnesium offers an exceptionally active electro-chemical voltage range, giving it a substantial protection edge that surpasses that of zinc and even aluminum. The downside is a higher cost, being pricier than zinc and near twice the price of aluminum.

If there’s one thing sure to annoy your neighbours, it’s being that guy – the one running the generator all night long to power the air conditioner. You may be nice and cool, but no one else in the anchorage can sleep thanks to all your noise. And that’s fair enough since, in all likelihood, you probably can’t sleep over the noise either.

No wonder a growing number of boaties are ditching the onboard generator altogether and replacing it with an AC inverter and a bank of lithium-ion batteries. Today’s high-capacity lithiumion batteries are powerful enough to run the air conditioner all night long, and without any noise, without any fumes, and without any need to get up in the middle of the night to refill the fuel tank in your underwear when it runs dry at 4:22am.

Lithium-ion batteries blow away traditional lead acid or gel cells in every possible way, starting with run times that are two to three times longer – giving them ample capacity to run energy-sucking appliances like air conditioners for eight to 10 hours or more.

They also last around seven times longer. Where standard deep-cycle cells have a typical life span of around 500 charging cycles before they need to be replaced, lithium-ion batteries can last over 3,500 cycles before giving up the ghost. Although they are more expensive to buy, lithium-ion batteries last for many more seasons than lead acid or gel cells – saving money in the long run while simultaneously reducing the number of dead batteries going into landfill. Talk about a winning combo.

So who said it ain’t easy being green? Thanks to forward-thinking engineering and old-fashioned innovation, anyone can greatly reduce their environmental impact out on the water. BNZ