PWCs are more commonly called jet-skis in New Zealand. ‘Jet Ski’ was the brand name given to the original Kawasaki stand-up PWC from 1972 and the name is now also used to describe the larger sit-down PWCs that makes up the bulk of the market.

Unlike the noisy, two-stroke machines of yesteryear which seemed to be exclusively piloted by young oiks keen on buzzing honest fishermen, annoying boaters and colliding with swimmers (I’m showing my age here), modern jet-skis are positively refined by comparison, and useful too. 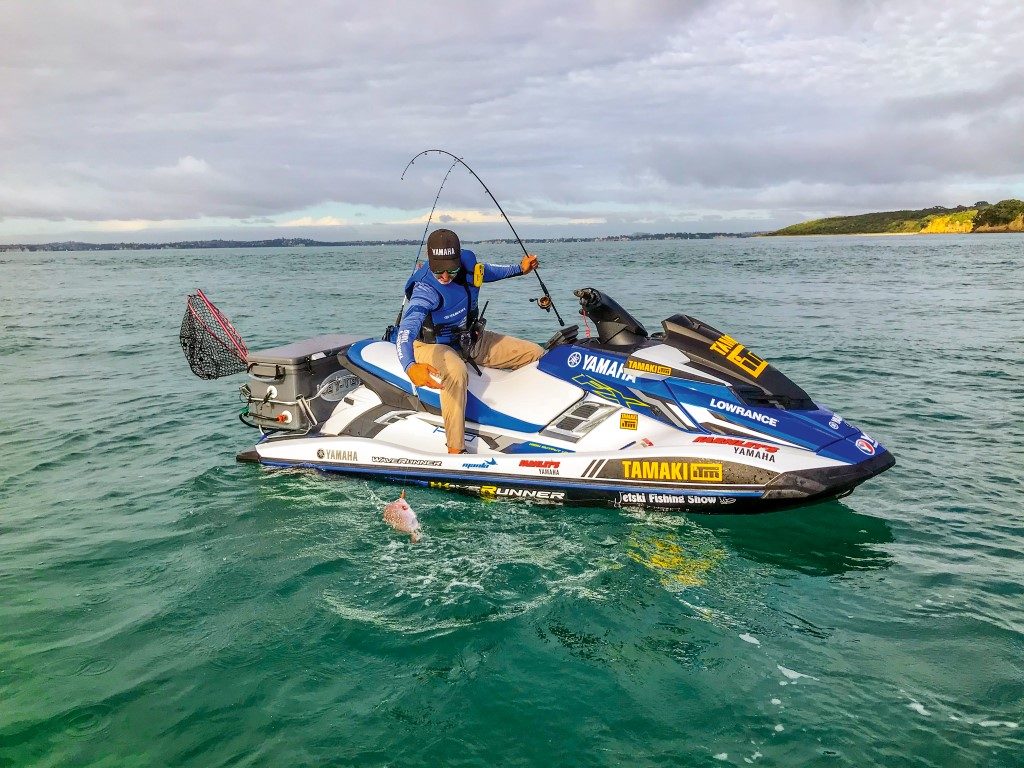 Not only are they larger and more powerful than before, they also use much less fuel and emit fewer harmful exhaust gases. PWC owners have on average become older and manufacturers such as Yamaha (WaveRunner), BRP (Sea-Doo) and Kawasaki (Jet Ski) have successfully pitched their machines at families.

Bigger PWC models can seat up to three people and tow skiers, wake boarders and all sorts of water toys. They have the range to stay out all day or cover long distances in comfort, and with their compact nature, they’re easy to tow, launch and store.
For many, a PWC represents a viable, practical alternative to a trailer boat.

The sport fishing PWC
One of the fastest growth areas for PWC sales in New Zealand is sport fishing. On any given weekend – and fine evenings during the week as well – hordes of keen jet-ski fishers around the country race out for a few hours of quality fishing time. 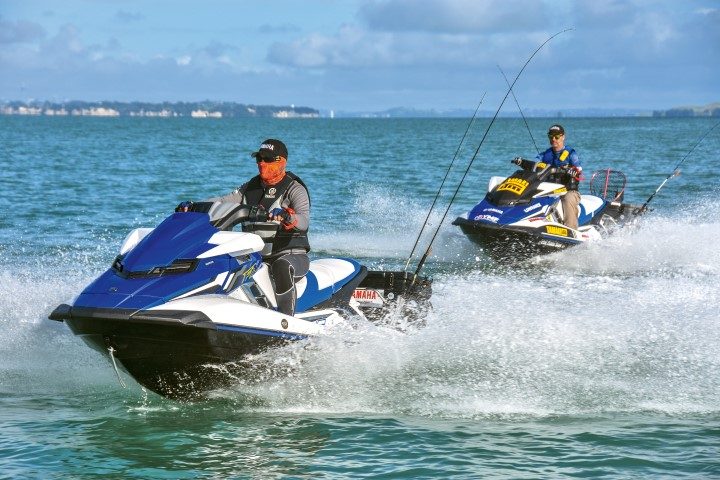 Using personal watercraft for fishing is nothing new – you can fish from anything that floats, including a jet-ski – but buying and equipping jet-skis specifically for sport fishing is a relatively new development. It has spawned an industry devoted to rigging jet-ski fishing machines and supplying accessories.

But why is jet-ski fishing so attractive?

I spent a morning with high-profile jet-ski fisher Kirk Davis to get some answers. Kirk is the creator and host of the television and social media series The Jetski Fishing Show. It grew out Kirk’s desire to share the exceptional fishing he was enjoying from his jet-ski: “Some of my mates were sceptical about the fish I was catching, so I decided to make a few videos to prove I wasn’t lying!”
Kirk’s home videos quickly morphed into a popular web series and then a regular segment on the long-running TV fishing and diving show Fishy Business, now screening on Choice TV.

Gone fishing
Kirk and I launched a pair of Yamaha WaveRunner FX machines off the beach at Maraetai, Kirk’s festooned with show sponsors’ logos and mine on loan from Yamaha Motor New Zealand.

Within a matter of minutes, we’d crossed over to Waiheke Island and started fishing. A little later, we stopped in Sergeants Channel close to Crusoe Rock, halfway between Waiheke and Motuihe Islands, where Kirk hooked and lost a good-sized kingfish before boating a smaller one.

We then spent a couple of hours casting soft baits in the shallows around Crusoe, catching perhaps 20 snapper between us before it was time to head back to the beach. 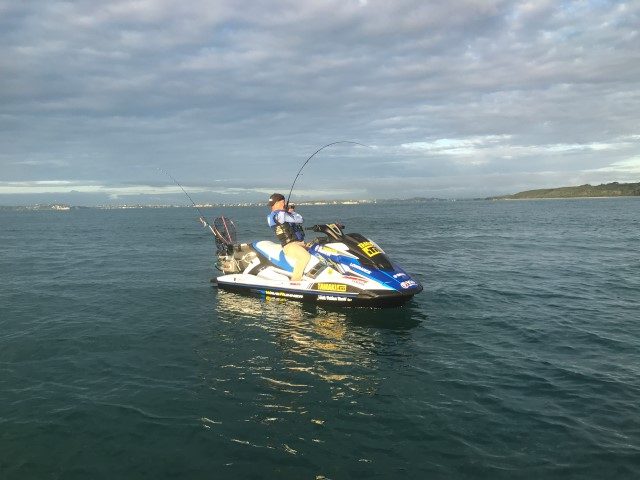 We’d squeezed in a lot of fishing and covered a fair bit of water in a relatively short time, which, says Kirk, is one of the many attractions of fishing from a PWC.

“That’s what’s so great about them. They’re fast, so you can cover a lot of water quickly, and they have the range to go a long way.”
Good skis will handle rough water without pounding their riders to pulp and they’re amazingly stable at rest, says Kirk, making them good fishing platforms.

With so much demand on people’s time these days, the ability to launch a PWC, blast out to your chosen fishing ground and then return home within a few hours should not be undervalued.

It’s one of the many things Kirk loves about jet-ski fishing, but he also enjoys hitching up the ski and heading away for a day, a weekend or longer: “It’s easy to tow, I can launch it just about anywhere and it’s not a hassle to park after a day on the water.”
It’s also easy to clean up, requiring nothing more than a hose and a soft brush. Flushing the engine is painless, thanks to the hose attachment fitted for the purpose, while the engine compartment remains dry and requires little attention other than usual engine servicing.

Kirk’s ski carries enough fuel to give him a range of over 100 nautical miles – he’s run all the way to Arid Island east of Great Barrier and back again from Matarangi on the eastern coast of the Coromandel Peninsula without needing to dip into the extra fuel he was carrying.

What to look for in a fishing PWC
I asked Kirk what attributes made a PWC suitable for fishing.

First up, he says, is size. Bigger skis provide superior performance and comfort in rough water and tend to be more stable at rest, making them better fishing platforms. Indeed, the WaveRunner I tried is so stable you can safely stand with both feet on one side deck without risk of capsizing. 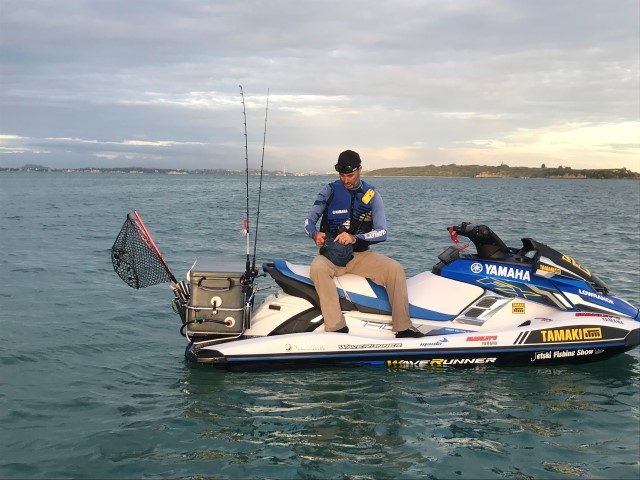 Certain PWCs have a reputation for being more comfortable in rough water, so if it’s all-seasons fishing or running well offshore you’re interested in, be sure to choose a ski that can handle rough conditions.

A fishing PWC should have a decent range. Jet-ski fishers often travel long distances in search of fish, and no one wants to run out of fuel many miles from shore.

Four-stroke PWCs generally offer better fuel economy that two-stroke models (which are usually older and smaller) while naturally-aspirated four-strokes are more fuel efficient than supercharged models. That’s why fishers tend to prefer non-supercharged PWCs, says Kirk, most being happy to trade horsepower for range and reliability.

Although some supercharged PWCs offer more than 300hp, for a fishing ski, half as many horses is ample, providing a top speed typically in excess of 100kph.

A fishing PWC should offer plenty of dry storage – again the Yamaha has heaps, in the large locker in front of the handlebars and in a handy ‘glovebox’. There’s even a sealed dry locker for phones, car keys and the like.

Kirk’s WaveRunner
Turning a suitable PWC into a serious sport fishing machine requires a few modifications and some add-ons. Unsurprisingly, Kirk’s naturally-aspirated Yamaha WaveRunner FX is set up with all the right stuff for fishing.

The most obvious feature is the large ice box on the transom. Chilly bins on jet-skis are a common enough sight these days, given that so many of PWC are used for fishing. The bin is usually part of a strap-on fishing kit that includes a stainless-steel cage or frame to hold the icebox, rod holders and safety lanyards to secure the rods and reels. 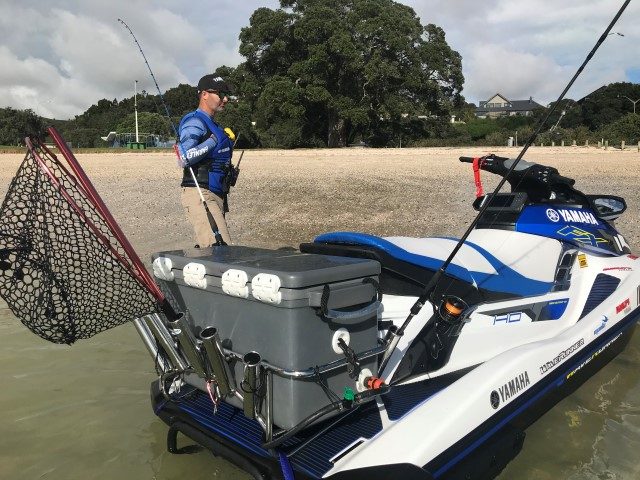 The ice box lid may or may not incorporate a bait tray; some feature split lids and others have compartments inside the bin. Kirk’s ice box is plumbed as a live bait tank, an innovation he came up with himself that’s since been taken up by many other jet-ski fishers.

The whole fishing kit assembly is quick and easy to remove if you want to use the PWC for water activities other than fishing.
Complete fishing kits that include the frame, rod holders, ice box, along with a range of accessories and safety equipment, are available from PWC dealers to suit a range of PWC models.

Electronics are an important tool for the serious PWC fisher. Kirk is trialling a Lowrance Hook 2, 7-inch unit with CHIRP sonar, DownScan and TrackBack. It has integrated GPS-chart-plotting.

Kirk has a through-hull transducer mounted close to the boat’s keel, the usual and best set-up for PWC, but the Hook 2 replaces his usual Lowrance unit and requires a different transducer, which is currently transom mounted. A transom-mounted transducer is more vulnerable to damage when launching and retrieving the ski and may not work perfectly at high speed. 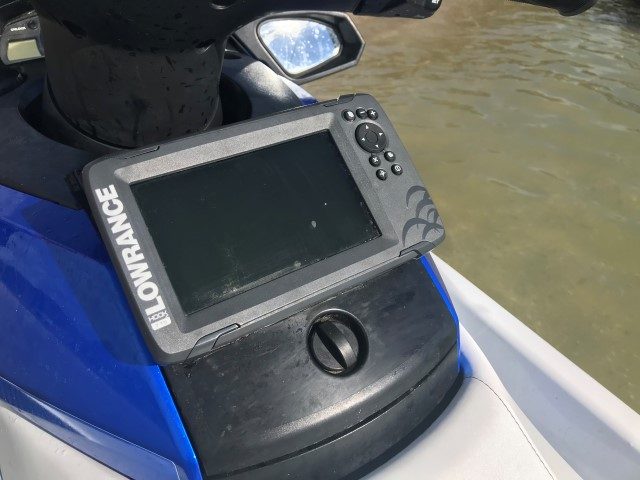 Really keen fishers sometimes fit 1kW transducers and large bracket-mounted MFDs, but it’s more usual to flush-mount a modest display in the console below the instrument binnacle as Kirk has done.

Kirk has stuck with a single 12V battery, but some jet-ski conversions feature two batteries so they can run their electronics all day without fear of flattening the starting battery.

Safety and comfort
Kirk takes safety seriously. He always wears the kill switch lanyard around his wrist, in case he is thrown from the ski. Trip the kill switch and the PWC engine will immediately stop so the vessel comes to rest.

He wears a PFD, as is required by law, a model designed specifically for a PWC. He carries a waterproof VHF radio in one of the PFD’s pockets and also clips an ACR personal locator beacon onto the PFD near the shoulder.

“People often put emergency equipment in one of the ski’s storage compartments, but that’s no good should you and your ski part company,” explains Kirk. “Having them easily accessible in your life vest means they’re on your person when you need them most – in the water!” 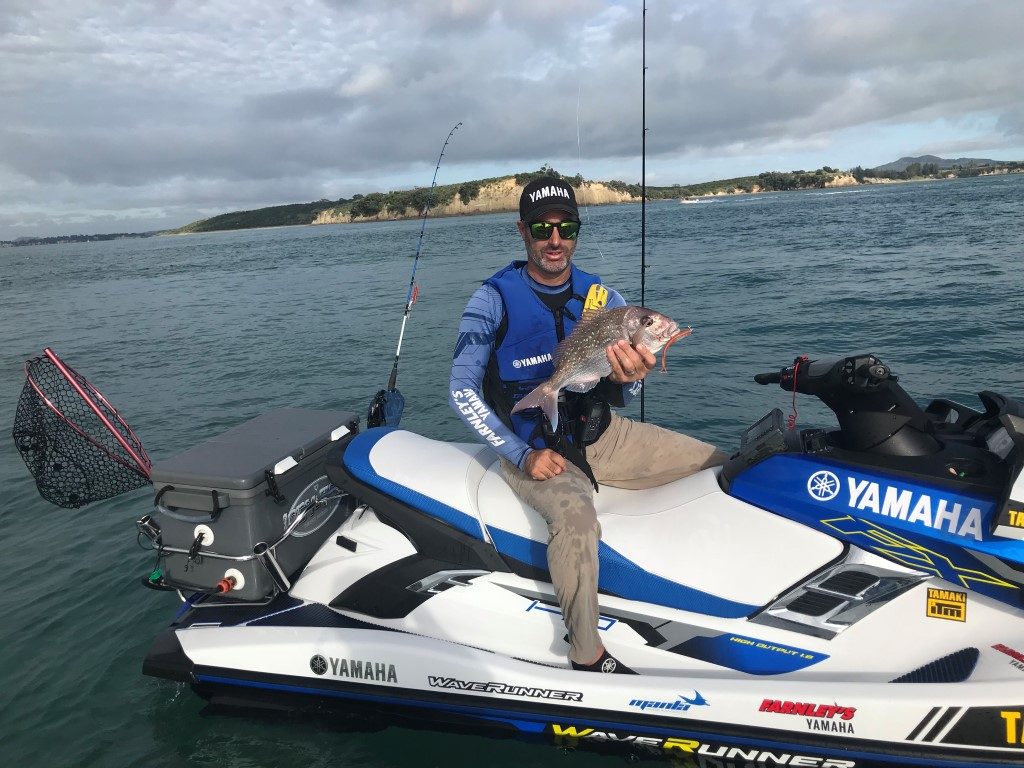 There is plenty of specialist clothing available for jet-ski fishing, including wet weather and thermal gear, but Kirk reckons he seldom bothers with neoprene leggings and the like, especially in summer. He’s more concerned about sun protection and so wears long-sleeved shirts, gloves, a hat and often face protection as well. When it’s cooler he’ll add a wind and rain-proof outer layer.
Kirk usually just wears a pair of long trousers: “The Yamaha is such a dry runner, there’s generally no need for waterproof pants…” He wears neoprene booties – your feet do get wet – and sunglasses year-round. Full-face masks are available from PWC specialists to protect the face against rain and spray, which can really sting at PWC speeds.