What started as a favour to a father returned an Auckland family of six to boating. Story by Zoe Hawkins.

In my early twenties I was very fortunate to be in a position to buy my own small racing keelboat. I raced and loved that boat, berthed in Westhaven, and I still consider those two years the best of my life.

I sold her when I became pregnant. But 13 years later, with four kids and a non-sailing husband, I thought I had consigned boating to a chapter in my almost forgotten past. One of the last times I raced, I won the sportsmanship prize at the 2007 Women’s Keelboat Nationals, for breastfeeding.

When I realised that my dad needed my help, I had to rethink. 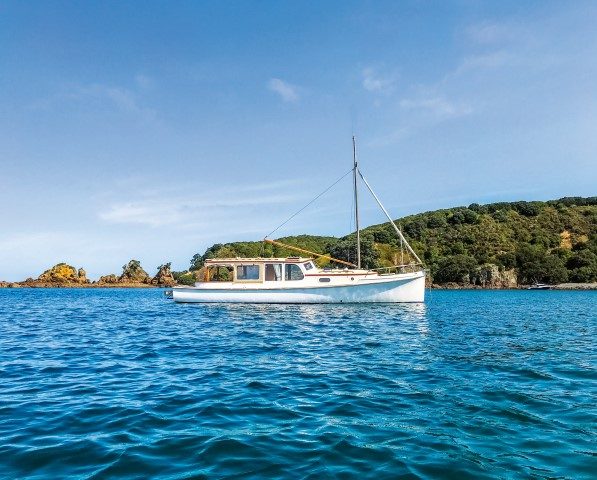 His Logan 33 – Surprise – a fibreglass replica motoryacht, was on a tidal mooring at Scott’s Landing, outside his former home. He had moved to Auckland’s North Shore a year earlier and unfortunately became unwell before he could relocate her to Auckland.

The boat was starting to deteriorate and I decided I could help him out by organising her a berth close to his home in Milford Marina, and bring her down.

That was in August. By September Surprise was at Robertson’s yard in Warkworth being made seaworthy, and by October the reality of bringing a classic launch down the coast was starting to give me sleepless nights.

The knowledge I thought was engrained after years of boating seemed to have slipped away. Thirteen years ago I was armed with just about every Coastguard course on offer, backed by the benefit of being on the water several times a week.

But now it seemed I’d forgotten how to use a VHF, what seacocks were and the vital importance of opening them. Even the rules of the road at sea were fuzzy around the edges. To top it off, this was a motor launch – and I was used to sailing. Engines made me nervous. 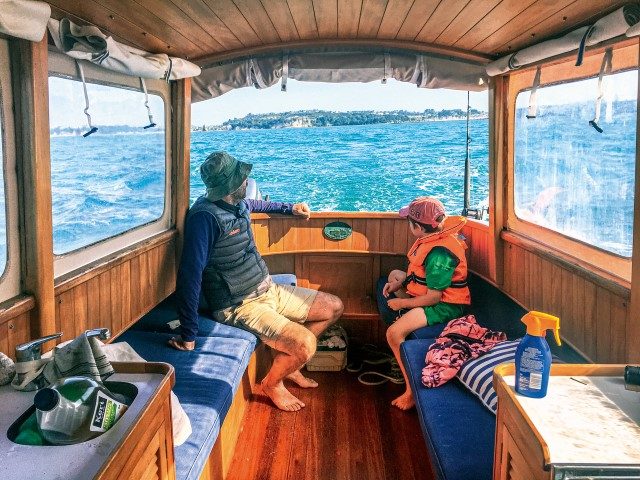 To prepare for the trip, I began some research. I wrote down the VHF channels I’d need, downloaded Navionics for the first time, grilled Dad about operating the boat, and updated the 1970s-era paper charts that were on board with some more recent versions.

I joined Coastguard and purchased a new pack of flares. And I made sure that the outboard bracket was in good enough condition to carry our 5hp in case of engine failure. I booked a marina berth at Gulf Harbour, the midway point, because I wasn’t sure about my ability to use an anchor.

My husband and I planned to do the trip together, possibly with a friend. It was becoming bigger than Ben Hur in my mind. I wrote down every detail of the trip and obsessed over the weather forecast, uncertain about how Surprise with her narrow beam and lack of trim tabs would handle any seas. In the end, we couldn’t find childcare for the children so we brought three of the four with us.

We cast off from Robertsons into the Warkworth River – my heart thumping as hard as the Lombardini – and I suddenly realised, with the first channel marker looming, that I didn’t know which side to pass it. (Of course I did actually know, but I wasn’t confident in that knowledge.) Thankfully I was able to Google the answer before we reached it.

As we chugged along the river and entered Mahurangi Harbour, I realised that handling a boat, and interacting with wind and water, is like riding a bike. It’s never forgotten.

Our children were ecstatic. Once in open water, faced with a 20-knot sou’wester, the boat was lively but handled the sea conditions beautifully. 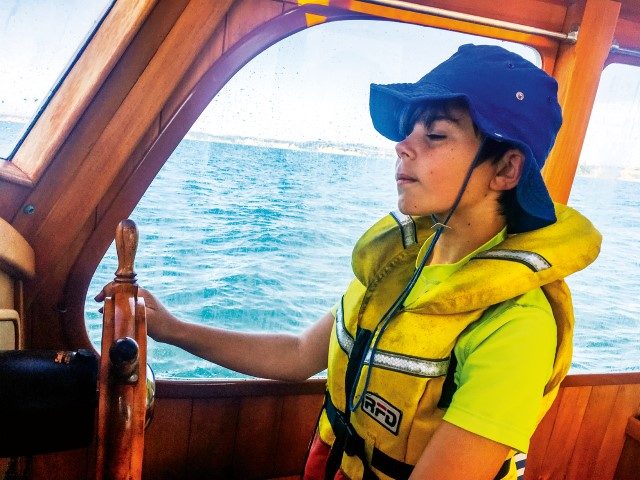 For the first time the kids – who have grown up climbing trees in the west Auckland suburb of Titirangi – saw dolphins, penguins and, around the back of Tititiri Matangi, even a seal. It was one of those magic days that makes you want to spend every living moment in the Hauraki Gulf.

We were low on fresh water and uncertain of the electrics (which turned out to be fine) so decided to call into Gulf Harbour Marina for the night.

Anyone who has driven one of these boats before will know that they are not easy to manoeuvre in reverse. ‘Slow is pro’ seemed like good advice (I got this from YouTube) and the only tense part occured when the throttle casing fell apart at the precise moment the helpful Gulf Harbour Marina dockmaster caught our line. I was glad to be able to say the bumbling effort was due to gear failure and not completely my ineptitude!

With the throttle fixed, on Day 2 we cast off from Gulf Harbour and spent some hours fishing in the lee of Rangitoto Island. While they fished, I watched more YouTube videos about how to reverse a classic style launch into a marina berth.

At high tide and with three respectably-sized snapper caught, we crossed the channel and entered Milford Marina – once again my heart rate was competing with the Lombardini. Thankfully, we were able to follow a line of boats in, through the open bridge, to berth almost like pros (thanks, YouTube!) in Surprise’s new home.

Thanks to this trip, and the opportunity my father gave us to bring the boat down, we now have a new generation of four hugely enthusiastic young boaties, enrolled in learn-to-sail courses at our local sailing club in French Bay, Titirangi, and loving every minute.

And of course, Surprise is waiting for us too, for the next time there is a free weekend.