Launched in 1947, an elegant motor launch designed and built by one of America’s best-loved naval architects is on the market after a three-year, US$4m restoration that’s recreated her original splendour. Her price? Half of that.

Now named BB (originally Seaplay) the 80ft yacht was designed and built by John Trumpy. His legendary creations were often described as the ‘Rolls Royces’ of American yachting. She was built for George Codrington, then vice-president of General  Motors – another in a long line of Trumpy boats commissioned by America’s wealthy elite.

BB’s new interior accentuates her history – period furnishings and glass light fittings – all offset by mahogany panelling, custom wood Venetian blinds, restored floor timbers and dhurrie rugs. And to get guests in the appropriate mood, facilities include a butler’s pantry with a fridge, coffee maker and ice maker. 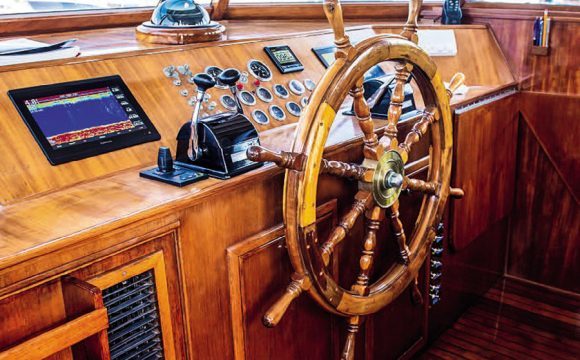 There’s also a card room with a cocktail table and a large aft dining space with isinglass curtains that can be rolled up on warmer days, a curved banquette seating area and a dining table for eight. She has accommodation for six guests, with crew quarters and a Captain’s cabin. Navigation gear, though, has been modernised, and includes a Garmin GHC 20 autopilot and Garmin 8612 XSV MFDs.

Other modern features include a pop-up, flat-screen 48-inch TV in the master stateroom and an airconditioning system. 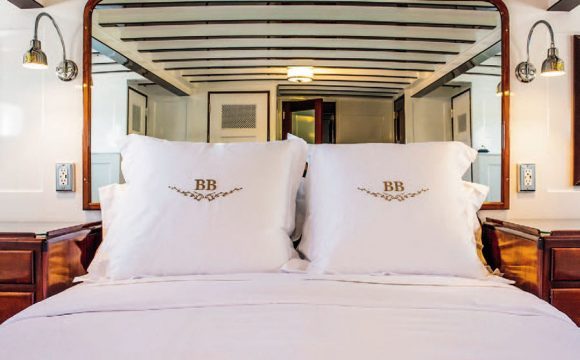 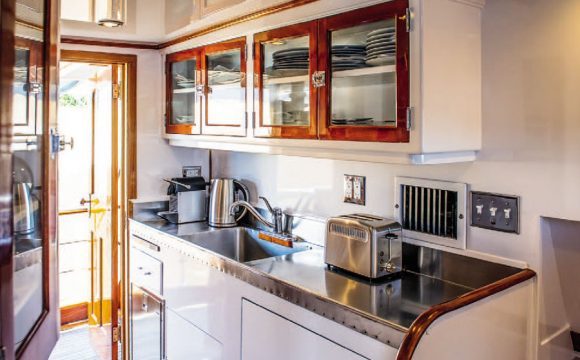 The yacht is currently moored in Fort Lauderdale, Florida. For more information visit Luke Brown Yachts. She is available for charter until she is sold. Visit www.nicholsonyachts.com. BNZ 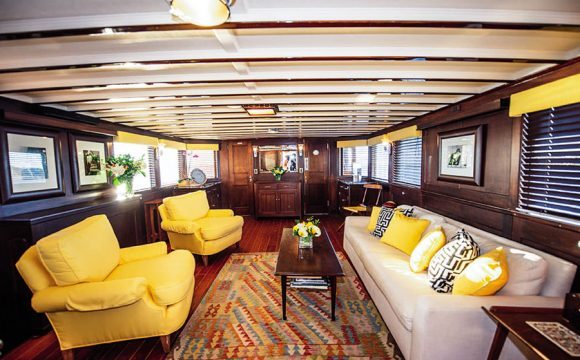 The Trumpy shipbuilding legacy began in the mid-1800s in Bergen, Norway, where Casper Trumpy owned a shipyard. Son John grew up working there, and eventually secured a naval architecture degree in Germany before moving to the US.

He joined the John H. Mathis shipbuilding company in 1910, based at Cooper Point in New Jersey on the Delaware River. The yard built houseboats, tenders and yachts for some of the wealthiest American families, including the 104-foot Sequoia II in 1925. She later served as the Presidential Yacht between 1933 and 1977. After Mathis’ death in 1939, Trumpy became the sole owner of the company.

By mid-1942 the yard needed more capacity for government contracts, and relocated to Gloucester City, New Jersey, just downriver of Camden. In 1943 it was renamed John Trumpy & Sons, and in 1947 it relocated to Annapolis, Maryland.

Trumpy’s designs resonated with the increasingly wealthy Americans. His vessels featured a narrow beam and shallow draft – and were renowned for their speed. His graceful, architectural style was defined by a plumb bow emblazoned with signature ‘T’ scrollwork, vertical Pullman windows and a counter stern with canvas awnings.

His reputation had much to do with the high quality of materials, meticulous craftsmanship and the best construction methods of the time. The frames were of steam-bent oak, and the hulls were doubleplanked mahogany fastened with bronze screws.

A fire destroyed the Annapolis yard in 1962 and a year later John Trumpy died aged 84. The company continued under his son (John Trumpy Jr), but rising costs, a labour strike and the advent of cheaper fibreglass hulls saw the company dissolved in 1974.

A review in the August 1948 issue of The Rudder magazine described Seaplay (BB) as having ‘a well-blended combination of seaworthiness, sleek lines, good turn of speed, ease of handling, sturdiness, compactness with comfort, reliability, and the ability to go anywhere her owner desires’.

Caring for your anchor rode

The beauty of junk